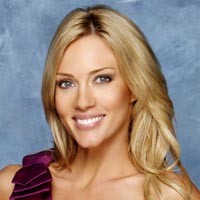 The city got another 15 minutes last week -- with teases for more -- when “The Bachelor” aired its 14th season with Richmonder Rozlyn Papa among the ranks of buff and primped cream puffs.

Richmond's been represented on the reality dating show before, which gives one bachelor the chance to date multiple women. But this time the local girl made it past the first elimination round and ended up in a full-on, tabloid-worthy controversy.

After a first episode of Papa offering sneering looks and snippy comments (“I imagine that Jack has a pretty big cockpit,” she quipped at one point), the well-endowed model and makeup artist and daughter of developer Tom Papa got her rose.

But the real thorns were out in preparation for Monday night's episode.

Rozlyn Papa is kicked off because of an inappropriate relationship with one of the staff members. Apparently a relationship with a producer blossomed -- though some online reports say she was set up and that it has nothing to do with sex -- and Papa gets booted off as a result Jan. 11.

It's not the first time Papa's faced relationship friction. She has a pending court case with her ex-husband, who charges that Papa has a less-than-ideal parenting style. Neither party could be reached for comment by deadline time, but sources close to the couple say that Papa's excuse for her early return from the show was that she missed her elementary-school-aged son.

While the so-called scandal might seem damaging, Papa and Modelogic, her modeling agency of eight years, stand to gain. Owner Stacie Vanchieri says it hasn't yet led to work, but that she's received calls from “Access Hollywood,” “Entertainment Tonight” and others. She says Papa is one of her busier clients, having done advertising work for Tigerlilly bridal jewelry and editorial work for Richmond Bride, Vow magazine and Carytown Guide. The controversy is likely to catapult Papa into national-level work.

Papa has an interview planned with a major magazine, Vanchieri says. The controversy may have also given Papa a leg up with ABC as a potential future star of “The Bachelorette.” So this week's rose ceremony may not have been Papa's last.