After releasing a genre-defying CD, the Folly looks to expand their audience 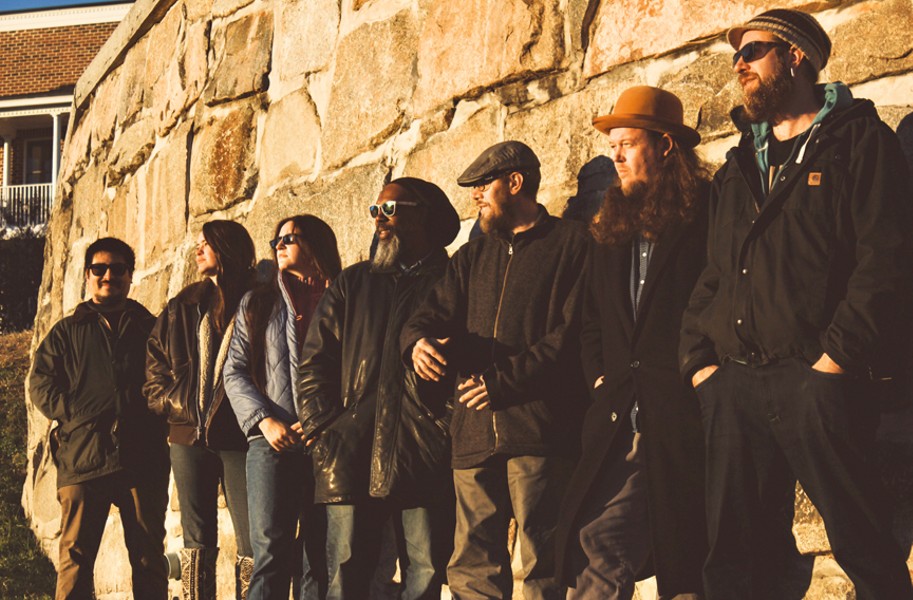 There are two contemporary definitions for the word folly. The first is "foolishness," the second a whimsically overbuilt ornamental structure. In Old English, the word was a close cousin of foliage, denoting a dense tangle of trees and underbrush. That usage is the source of Folly Beach, South Carolina, whose charms inspired Jordan Lette to name his band "The Folly." Inevitably, in the competitive world of popular music, all the meanings jostle for primacy.

"It's the folly of man," Lette says. Everything in the world is so screwed up, but there is always hope and beauty behind it. "It is a sign for the truth in this day and age."

The Folly's music is resolutely eclectic, a mélange of folk, progressive rock, post-punk, light metal, and '60s psychedelia — the latter the result of singer Anneliese Grant, whose powerhouse vocals recall Jefferson Airplane's Grace Slick. Every song is distinct, although there are similarities in compositional approach. A soft intro leads to the main, lyrical section, followed by an extended complementary or contrasting instrumental middle section that resolves back to the lyrics for the close. It's a structure more common in jazz than in pop.

The band formed in April 2015, with the current lineup together for the past two and a half years. The rhythm section if bassist Jonny Powell and drummer Josh Santamaria. Veteran horn player Gordon "Saxman" Jones and percussionist Jacob Larson add funk and Afro-Caribbean layers. Tara Dillard's whisper to a rollick electronic fiddling is perhaps the most flexible and differentiating ingredient.

"We reach out to a wide array of genres," Grant says. "More funk, more jazz, more blues, we can adapt to whatever environment." Band members bring their own tastes. Grant says she's drawn to genre-spanning singer Janelle Monae. Powell is into progressive and math rock. Santamaria is a Beatles fan, Dillard aligns with bluegrass. It's a Swiss Army knife of a band, trying to carve out a sustainable career in a crowded, competitive market.

For the last two years it's had a residency at the Cary Street Café. At first it was every month, now it is every second. That is ending on Dec. 6 with an appearance with Eddie Prendergast's similarly category-defying big fun band, Mikrowaves. The Folly is looking to break out of the local scene into the next phase of its career.

The band's new CD, "Find a Way," is the icebreaker. The follow-up to the more traditionally rocking, self-titled 2016 EP, it was self-funded with months of gigs and recorded at Minimum Wage, Lance Koehler's Richmond studio.

"We had the release party at the Hof in September," Lette says. "We sold so many physical copies that we ordered a second run. Now it's available via Spotify, Amazon, iTunes. And we take copies wherever we go."

That's great for people who know the band, but it is a drop in a ceaseless torrent of new releases, many backed by some level of paid promotion. In a fragmented market, with 50 subgenres of the metal subgenre listed on Wikipedia, it's audacious to focus everywhere rather than zeroing in on a specific market niche.

Getting access to new listeners is hard work. "We have a few radio appearances to promote," Lette says. "We are getting it out to universities and colleges. We are getting love and support from a lot of friends and fans in the music industry." They are reaching out to bands with whom they've played with for help in assembling an East Coast tour, with hopes to expand to wider reaches of the country.

Every new stage is an opening for new fans. While promoting an album constrains freewheeling improvisation, the repetition polishes performance. "I consider myself an entertainer," Grant says. "While the audio experience is important, we have to be visually entertaining and engaging. The audiences aren't watching us with their eyes closed."

"Our hope is that we are giving people freedom," Lette says. "Every 45-minute set is a vacation from bills, problems, the day's dark news. If someone comes in feeling disheartened, hopefully they will leave with a smile on their face."

But will the Folly find a happy ending in a vast and fickle entertainment market that likes what it knows more than knows what it likes? "I have to remind myself," Grant says, "that though you work as hard as you can in this industry, there is always the luck aspect. You may be willing to play the game, but it is not always going to be enough."

So maybe their music is a tangle of styles and influences. Maybe it is whimsically overbuilt for a genre pigeonhole. Maybe trying with open eyes to make the band's voice heard in the cacophony of commercial music is the very definition of folly. And maybe that foolish hope, replicated by aspiring bands across the world, is something that benefits us all.