After Paving Over History, VCU to Allow Excavation 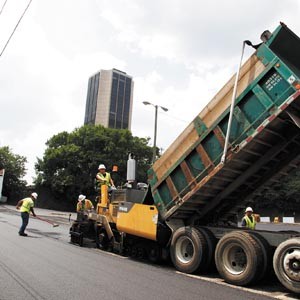 Less than a year after Virginia Commonwealth University decided to pave over a portion of the Burial Ground for Negroes in Shockoe Bottom, the university says it's willing to allow a test excavation of the site.

In August preservationists and local historians protested the university's decision to pave the area just north of Interstate 95 near Main Street Station to make room for a parking lot. Historians say underneath the lot is a burial ground for enslaved and freed blacks from the 18th and 19th centuries.

“Are we in favor of someone coming in and doing an archeological dig there? Sure,” VCU Associate Vice President Brian Ohlinger said in a public question-and-answer session held May 12 by the Future of Richmond's Past, the local coalition of university presidents, museum directors and tourism boosters that holds regular discussions about Richmond's role in the Civil War and slavery.

VCU President Michael Rao, who attended the discussion, said the university was “committed to working something out” regarding the burial ground but deferred to Ohlinger to address the issue more specifically. University officials provided a partial recording of the event to Style Weekly.

“We'll make the site available,” Ohlinger said in response to a question from Phil Wilayto, editor of the Virginia Defender. Wilayto and others have protested what they consider the lack of proper commemoration of the site, marked only by a modest brown-and-white sign under Broad Street.

The precise dimensions of the burial ground are unknown and have been a point of contention. A June 2008 study by the state Department of Historic Resources argues that most of the burial ground is likely obscured under a swath of Interstate 95, with a small portion extending under the VCU parking lot. The report leaves open the possibility of a test excavation but does not recommend one outright. A September 2008 response to the state study by College of William and Mary archeologist Michael Blakey criticizes the state report, deeming inadequate the state's method for estimating the possible dimensions of the cemetery by literally drawing a square around the words “Burial Ground for Negroes” in an 1810 map of the city.

Last year the university committed to not using a 50-foot-wide sliver of the parking lot that the state report identifies as possibly within the bounds of the burial ground, but the site has continued to spark controversy. Former city councilman Sa'ad El-Amin filed a lawsuit against Department of Historic Resources Director Kathleen Kilpatrick in January to demand that the agency sponsor a test excavation.

Such a dig is “basic archeological practice,” says Shawn Utsey, chairman of VCU's African-American Studies program. Utsey directed the recent documentary film “Meet Me in the Bottom,” which traces the political debates surrounding the burial ground's location, and attended the May 12 discussion.

Utsey and Wilayto consider Ohlinger's statement supporting a test excavation a step in the right direction. But “somebody's gotta pay for it,” Wilayto says.