Wood will be available at roped-off area in landfill. 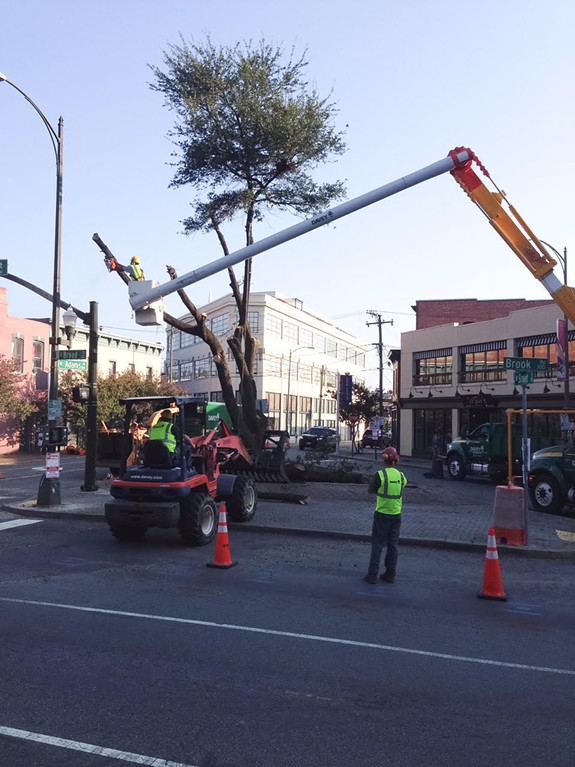 A controversial decision to chop down a popular live oak at the intersection of Brook and Broad streets happened this morning, following a press release from the city’s Department of Public Works.

Lane closures around the triangle park, also bordered by Adams Street, started at 7 a.m. and continue through 5. The closures also are in effect Sunday, 7 a.m. to 5 p.m., and Monday and Tuesday, 9 a.m. to 4 p.m.

Sharon North, DPW’s public information manager, said yesterday that she couldn’t provide a smaller window than that: “I don’t know exactly when it's coming down.”

Even if she had known, people weren't allowed to come take sections of the tree at Broad Street. “It’s in a work zone,” she says.

A long public debate preceded the tree's doomsday. But intrepid carpenters, wood sculptors, meat smokers and nesting beavers will be able to find the oak at East Richmond Road Convenience Center, a landfill where the removed tree will be taken.

“There'll an area roped off where the larger pieces will be,” North says. “Come by after Tuesday.”

Smaller pieces will be chipped on site. 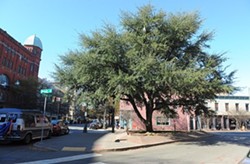 “Feeling like I just need to let that one go,” says Alex Graf, owner of ZZQ Barbecue, one of those opposed to the tree’s demise. She looked into moving it but found the process too expensive to justify.

The tree makes way for the Maggie Walker Memorial Plaza and a statue of the Richmond native, who was the first female bank president in America, a black leader, educator and businesswoman in a segregated Richmond. The location of her first bank, St. Luke Penny Savings Bank, opened in 1903, lies in disrepair near Gilpin Court, and her grave is overgrown at Evergeen Cemetery.

This will be the first effort to memorialize her by the city.

The plaza project leaves in tact the dozens of large, leafy trees that line Broad Street in either direction.