After Four Decades in Broadcasting, Co-anchor Sabrina Squire Signs off at the Top 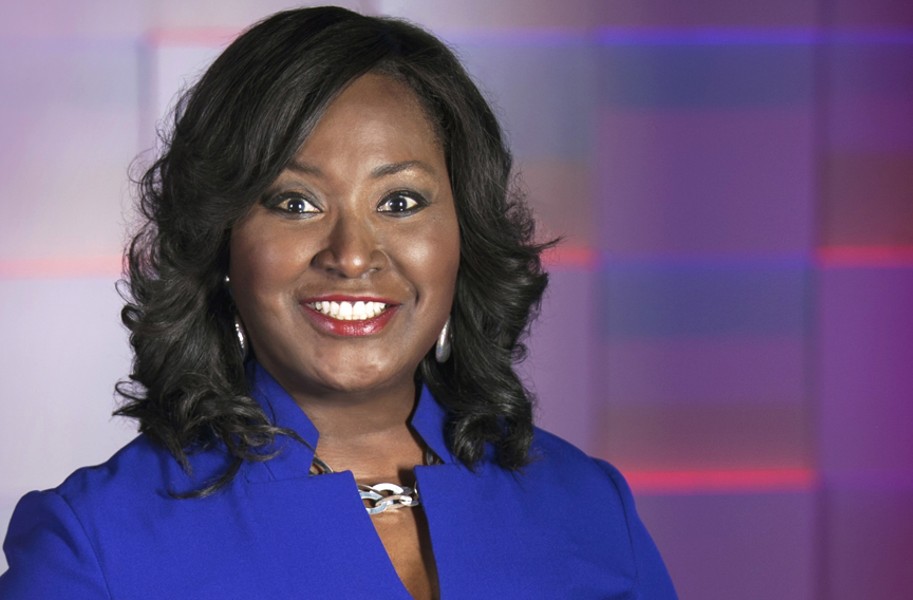 For 37 years, co-anchor Sabrina Squire has graced the Channel 12 airwaves with a soothing, calm voice, bright eyes and warm smile. For a lot of that time, the NBC station has been No. 1 in the market.

Soon, when she says, "We'll be back," it will be without her in the anchor chair. Squire is retiring May 23. Her position alongside co-anchor Curt Autry will be filled by Karla Redditte, who joined the station in 2012.

Squire, 63, worked in radio before starting at NBC-12 as an intern, she says, working her way up to become Richmond's first black news anchor in prime time. She's told many local stories through the years and even traveled to South Africa following a Virginia delegation that was exploring trade options after apartheid ended. Her daily schedule usually ran from 2:30-11 p.m., but often she's been in the office into the early morning hours during elections or big news events.

A few days after Squire announced her decision, Style spoke with her about her long run and what she plans to do next.

Style: When did you decide to retire?

Squire: I had been thinking about it many years. When I signed my current contract three years ago, I decided it would be my last. It was an opportune time for my family. My daughters were grown and on their own. For many years, I felt like the work-life balance had been tilted heavily toward work. I was really just welcoming a time to have more flexibility in pursuing personal interests.

I've had a really fulfilling career and just want to have an equally satisfying, exciting personal life. Right now, I feel like I'm about to graduate.

What will you miss and what won't you miss about the job?

I won't miss sitting at the computer screen and logging tape, writing down everything so I can have all the quotes for the story I'm writing. I will absolutely miss the camaraderie of the newsroom — the energy and electricity when it's all hands on deck and everyone is trying to meet deadlines.

What are the highlight stories that stand out to you?

The first series of reports I did in 1990. It was a time when several young kids had gone missing. Catena Parker was one. There were brothers and a girl from Colonial Heights. I had just had my second child and I was so horrified. I couldn't imagine what these parents were feeling. So I wanted to talk to them.

I did a series of reports, and this whole thing about warning your children. I think that was the first time I got a merit award [from the Associated Press] and I was really proud about that. But some of the stories that have been the most moving to me are just associated with acts of kindness. I've just been awe-struck by the generosity of people who reach out to total strangers and welcome them into their homes. Give them organs for transplants, their time, money, just to help.

Which co-anchor did you have the best chemistry with?

[Laughs] Oh, I can't go there. It's only been Gene [Cox], Ryan [Nobles], Curt now, and I really feel fortunate. They're all amazing newsmen. Curt is one of the smartest and hardest-working people I know in this business.

A friend asked me why local stations have two anchors, anyway, when nationally there is only one? Any clue?

Ah. In the mornings they have teams for sure. And there was a period when ABC had three, including a gentleman from Richmond. You know, I don't know why they do.

Just a proven format I guess. How do you think the business has changed the most since you started?

[Laughs] Have we spoken before? Let's see well, just the environment has changed. I've been through four news sets over four decades. And just the number of newscasts: When I started we had two at 6 and 11 p.m. I think we did five minutes in the morning when I started. Then we added 5:30 and 5, and then 4 and the 10. [Social media] has been the latest big change.

What can be done about fixing the broken trust between the public and journalism?

I think you just have to do the work and make sure you are crossing the T's and dotting the I's, and you do the research. So that when your credibility is called into question, you can point out the facts. Just be consistent in the mechanics of the job and the process. It really is the details.

People have talked about a blurring of news and entertainment, particularly with television news. Do you see that as a good thing that should continue?

You have to be able to connect with people. You have to draw the audience in, so you look for ways to be able to speak to each generation and reach them where they are. If they're on social media you go there. It's just a different platform that requires different ways of writing. Will it continue? I think so, yeah. It's a good thing that it requires us to be more creative in our storytelling.

Imagine the millions of life moments that have gone by with the news on in the background — and you beamed into people's lives. Has the job taught you anything about Richmonders?

It's really just reminded me how wonderful Richmonders are. They like to connect and get to know the people they watch on the news. I've had experiences where I've been asked to come to birthday parties, weddings, baby showers and speak. And I'm like, 'But I don't really know your family!" [laughs] That's what's really contributed to my tenure, people get to know you, befriend you, and be there for you.

What do you think about your legacy?

I like to think that I've been a good role model, an inspiration to young women, particularly of color, who are thinking about careers in broadcast journalism. I hope I've proven that women bring a lot to the table: We connect with viewers, expand the audience, deliver ratings, contribute greatly to the product.

Working in the media is hard on people. It's not healthy in a lot of ways. Personally, how have you dealt with it all these years?

I have not always dealt with it well. It is addictive. Jim [Duncan] and I joke with each other about going home at night, not being able to turn off the Twitter feed. It affects you. Having family has been good for me. Yoga too, definitely.
One of my first orders of business is trying to rediscover what seven or eight hours of sleep is like. I've been a morning person thrust into a nighttime position for four decades. I'm just going to spend much of my summer away from news, working on self-care.

I'm going to have to decompress for sure. I've told family and friends that I walk around, sometimes, expecting disaster to break out any minute. I'm used to reporting on so many. I'm going to have to work on getting all that out of my system.
But I'll definitely be watching and supporting my peeps. S