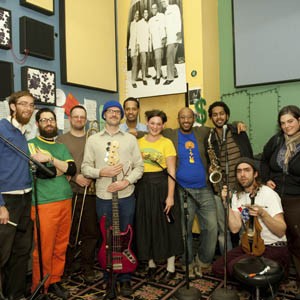 The first time many American listeners got a taste of Ethiopian jazz was in Jim Jarmusch's 2005 film “Broken Flowers,” which showcased the mesmerizing grooves of the ‘”father of Ethio-jazz,” Mulatu Astatke. Increased sales of the encyclopedic Ethiopiques CD series on the Buda Musique label soon followed.

Around that same time, Ethiopian-American musician Danny Mekonnen was playing jazz saxophone in Boston and getting his masters in ethno-musicology at Harvard. Heavily influenced by big bands of Emperor Haile Selassie's era such as the Imperial Bodyguard Band and Police Orchestra, he formed Debo Band (rhymes with ‘hello'), an Ethiopian music collective that has been steadily gaining notice.

“I grew up listening to my parents' bootleg cassettes,” Mekonnen says. “The irony is that even though I had already been to Ethiopia and heard the music, when I really got into it was when the Jarmusch film came out.”

Debo Band now features 11 members, and Mekonnen says it bridges a gap between the Ethiopian immigrant community around Boston and the younger punk scene that includes adventurous music lovers of international sounds. The band has based its repertoire on classic '70s Ethiopian grooves while tinkering with a lineup that now includes mostly American musicians with backgrounds in Eastern European brass music. By reinterpreting the material and mixing in contemporary Ethiopian pop and its own originals, Debo has found a fresh way to present the country's traditions.

“I thought, what if we take older Ethiopian instrumentation — sousaphone, violins, accordion — and play some of the more funky and psychedelic stuff from the '70s,” Mekonnen says, noting that he doesn't consider the group a cover band because it uses such different instrumentation and arrangements on the classics.

Touring the Ethiopian capital of Addis Ababa, members met a young dance-and-song folk group, Fendika, traditional wandering musicians who will be accompanying Debo on the first major East Coast tour that includes Richmond, along with New York, Philly, Washington and Chicago. Innovative Fendika leader Melaku Belay is a top dancer in Ethiopia with more than 40 international concerts in the past three years. Mekonnen explains that one has to see the music danced to really understand how the musicians feel the rhythms.

“Where we're feeling the beat does not always sit well with foreign audiences,” he says. “But when you have the visuals of the body moving to it. … It gives the band a real vibrant element of authenticity and energy.”

He's bringing 14 musicians into the intimate Balliceaux back room, which will likely be sold-out, but Mekonnen is not worried about space constraints.

“We've played so many types of rooms, we know how to work with it,” he says.

The Debo Band performs with Fendika on Saturday, Sept. 18, at Balliceaux, 203 N. Lombardy St. Tickets $12 in advance and $15 on the day of show at Balliceaux.