Despite the city's best efforts, graffiti artists are bound to stay. 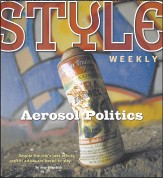 Graffiti may be admired in some circles, but localities and property owners are increasingly fighting the illegal practice. The city spent more than $150,000 cleaning such work off public property in fiscal year 2005. A used, rusted spray-paint can, found near graffiti on a wall near the Governor's School, is evidence that the graf writers aren't going anywhere.