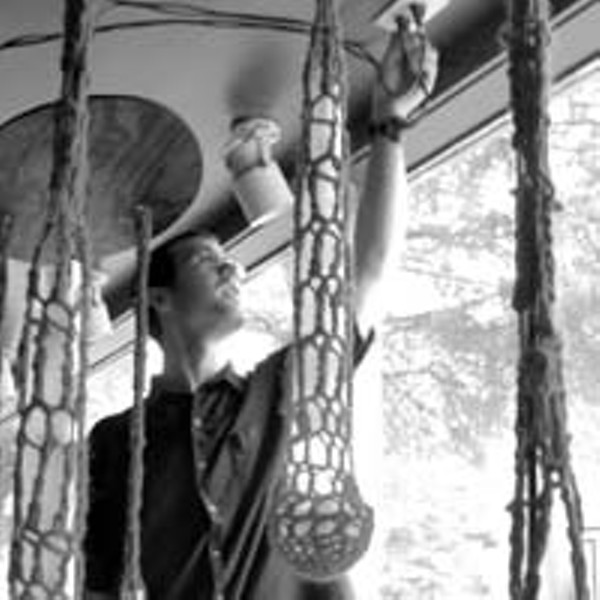 Thomas Staats and Chantal Meek hope to buck those odds. On June 4 the pair opened the Artist’s Factory, a first-floor loft space at the corner of Foushee and Broad streets meant to showcase the work of emerging artists. But Staats and Meek hope to keep their business solvent and their doors open by offering something new: a café within the gallery where art enthusiasts can rest their feet and enjoy fancy coffees and desserts, especially during the monthly First Friday art walks.

“The idea is to get people in for First Fridays and keep them here, by offering them a combination art gallery and bistro,” says Staats, an artist who moved here last summer from Philadelphia. He’s quick to clarify that Artist’s Factory won’t be another coffee shop decorated with student work, but a real gallery that features serious art in all media. The plan took shape when he and Meek, a Colorado native and former University of Richmond art student, noted the impressive scale of the city’s monthly gallery trek versus the relative scarcity of inviting night spots in Broad Street’s gallery district.

“There’s not many places to go down here at night,” says Meek, “unless you want to go to a bar.”

She and Staats hope to remedy this, but there’s work to be done. Their café won’t be installed until a wooden balcony overlooking the gallery is enlarged to contain it. And there are the inevitable zoning and legal matters to sort out. Still, Staats insists that construction “has to start by August.”

But lattes and pastries can’t sweeten the taste of mediocre art. Can Artist’s Factory deliver the goods along with the goodies?

The current show is a promising start. It’s an engaging collection of paintings, sculptures and photographs spearheaded by an endearingly goofy yarn-and-light-bulb installation by Amanda Fredenburg-Santa in the gallery’s front window. Staats and Meek plan to feature a rotating stable of artists, who will install and de-install their own work. “I want people that are hard workers who I know are very true to what they do,” says Staats.

Helen Levinson knows the feeling. The former director of Cudahy’s — one of Richmond’s oldest art galleries, which closed in 2003 — has imported her own stable of established artists to her new gallery, White Canvas, which opened June 18. At 111 S. 14th St., its posh digs — a spacious loft in a white brick building beside furniture emporium La Difference — and familiar artist roster will surely bring back Cudahy’s crowd of staid, decorative art fanciers. But Levinson hopes to broaden the gallery’s appeal as well. “We’re always interested in emerging artists,” she insists, “you might say we’re trying to reach the young people who are just starting out.”

Time will tell. But it remains a remarkable thing that ventures as different as White Canvas and the Artist’s Factory — one a conservative commercial gallery, the other a cutting edge artist-run space — can coexist and even thrive in a city the size of Richmond. What’s more striking is that in this art S