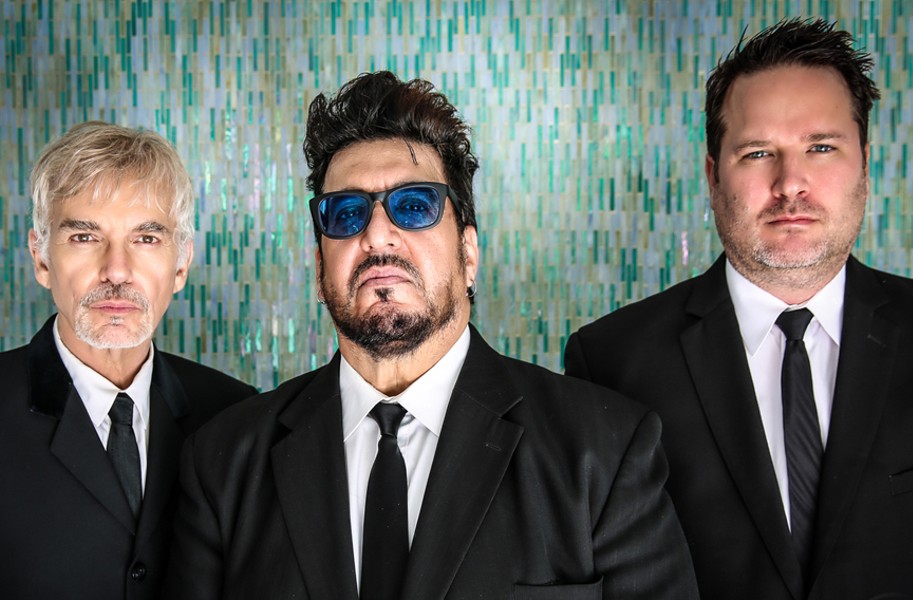 Drummer, singer and songwriter, Billy Bob Thornton, guitarist J.D. Andrew and keyboardist Teddy Andreadis are the Boxmasters. The band is celebrating 10 years together with a show at the Beacon Theatre in Hopewell.

If you’re a fan of Hollywood star Billy Bob Thornton, you probably know that he never planned to become an actor. His first love has always been music.

He worked as a roadie for the Nitty Gritty Dirt Band in the mid-’70s, played in a ZZ Top cover band called Tres Hombres, recorded solo albums, and for the past 10 years has been frontman and drummer for the Boxmasters, mixing ’60s hillbilly music with British invasion rock set to the “Sling Blade” writer’s often funny lyrics.

While known to express frustration with journalists who focus on his celebrity, Thornton comes across as friendly and happy to talk, with his instantly recognizable, laidback drawl, when I catch up with him to preview the band’s appearance at the Beacon Theatre in Hopewell. Guitarist J.D. Andrew adds the group is excited to be back on the road, playing renovated, historic theaters.

We spend the first 10 minutes chatting about our mutual love for the Zombies, and the last 10 minutes talking sports — another passion of Thornton, a former baseball star who tried out for the Kansas City Royals. But here’s the Boxmasters part:

Style: You guys have been pretty prolific. What’s the secret?

Thornton: My boys are 22 and 23, and my daughter is 12 — we keep busy with that. When we’re not doing that, we’re not the kind of people who need a lot of time to think about stuff. Especially me: I have all kinds of anxiety disorders. So for me, writing songs is kind of like going to the shrink [laughs]. Writing is pretty therapeutic.

Your press notes say that for the new album, “Teasurfing,” you tried to capture the mindset of a ’60s band. How does one do that today, smoke lower-grade weed?

[Laughs] Thing is, we’re already so influenced by the ’60s anyway. When we make records we generally try to sound like a contemporary band. We use recording techniques of nowadays — but we play on vintage equipment. But on this one, we decided, lets act like it is 1966, and we don’t know anything beyond that, and let’s write songs as if we’re competing with the Animals, the Kinks, the Beach Boys.

If we wanted to write a song like “Please Please Me” or “Love Me Do,” we didn’t hold back or try to be clever on every song. These are our attempts at writing pop hits of the ’60s. We also love British mod music like the Small Faces, and wrote some as if that was the other band down the street. So that’s how we got the mindset. It was largely in the songwriting and some changes in instrumentation — using Farfisa or [Vox] Continental organ as opposed to B3.

Listening to your other records, I could hear later influences such as Big Star with the melodies and hooks.

Anytime anybody mentions Big Star around us, we’re thankful. We admire them so much. When I was a kid I saw the Box Tops, and Big Star played at my high-school gymnasium. And I was told the Box Tops played our prom when I was 14. I grew up an hour and a half from Memphis, and recorded at Ardent Studios back in ’79 — Jody Stephens, the drummer from Big Star still runs the place. It’s like our home. … I made my first real recording at Muscle Shoals in 1974. And we recorded three songs there last tour. We stayed up the whole night before because we have friends in Huntsville, then rolled in at 8 a.m. You could’ve breathed on us and knocked us over.

The second track, “Easy Summer” sounds like an obvious single — in the jangly McGuinn-Petty kind of vein. Was there a specific woman who inspired that?

It’s more like a type. I’m sure you’ve had this in your lifetime — you know when you’ve got a girl that’s just so far above your station that you’re kind of afraid to talk to her? There was a movie called “Summer of 42” that came out in the early ’70s about three kids that would go out to this East Coast beach town every summer with their families. The virgin guy falls for Jennifer O’Neill, an older woman. That movie always struck me.

But I did it the other way around, where the amazing girl comes to the beach, everyone is falling for her but she won’t have anything to do with ’em. She goes for the guy who’s not chasing her. In a lot of ways, it’s the nerdy-guy-wins thing. There’s a line in there, people will think it’s misspelled in the liner notes, the one “who sees beyond the peer” — she sees beyond the crowd.

It’s interesting you bring that song up as a single, because Dwight Yoakam, who’s a friend of ours, is really good at sequencing. He came over and listened to [the album], and he centered everything around that song, that’s the one that jumped out at him, too. I’ve always known when Dwight was jealous of a song. Marty Stuart and I wrote a song called “That Mountain” that we still do — Dwight always said, “That’s a song you’ve written that I wish I had written.” He didn’t say it this time, but I knew [laughs].

Another song “Bellflower” reminded me of the old California tourism commercials with Gov. Schwarzenegger barking “Come to Cal-ee-fornia.”

Yeah [laughs] that “Bellflower” song is almost like it’s written by the Chamber of Commerce — as a matter of fact, a lot of the lyrics I got from the website for Bellflower maintained by the chamber: the cost of living, square mileage, etc.

From the very beginning we made up a fake bio for the Boxmasters — J.D.’s from Kansas, I’m from Arkansas, Teddy’s from New Jersey — but we’ve all lived in California forever. I’ve been here since 1980. So we wanted a central place where the band was from. We thought, well let’s pick a town where if you’re bragging you’re from there, something is really off. Bellflower is nothing but a bunch of car lots. Nobody’s from there. So we tell people we’re from Bellflower, we say it from the stage.

When you’re making films, do you miss the control you get with music?

Oh yeah, absolutely. The truth is they both give you a real thrill in different ways. There’s something fulfilling about making a movie you don’t get from music [and vice versa]. At the very best, a film should be musical. It should have a rhythm to it, whether fast or slow. Editing is a musical trade.

Having a famous person in the band, is it tough to enjoy the moment with a sea of cellphones pointed at the stage? I just saw Chris Rock recently and he banned phones from the venue.

Yeah, it’s not fun. But at the same time, that’s the way it is now and you can’t let yourself worry about it too much. Maybe a guy like Chris Rock — and I know him, he’s a good dude — as a comic and a cynic, people might find [it OK for] him saying to leave cellphones outside, they’ll still be with him. But when you’re playing music ... it’s probably counterproductive to instantly alienate them by saying you can’t have your phones [laughs]. We know it’s gonna happen. Also, it challenges us, you know — let’s not go in there and do a shitty show. S

The Boxmasters perform at the Beacon Theatre in Hopewell on Wednesday, April 26. Doors open at 6:30 p.m. Tickets cost from $25-$80. thebeacontheatreva.com.