Actor and Comedian David Cross on His New Tour, the Uberleft and Why He Said Goodbye to Twitter 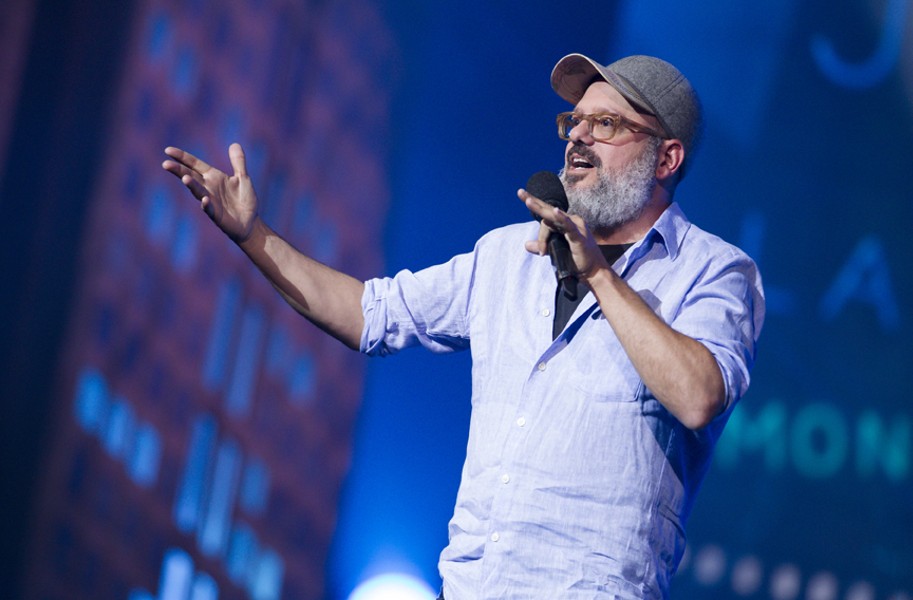 You probably know his face, or maybe his voice.

An Atlanta native, comedian David Cross cut his teeth in the Boston stand-up scene of the mid-'80s before becoming a TV writer for "The Ben Stiller Show," where he met kindred spirit Bob Odenkirk ("Better Call Saul") and soon created the revered HBO sketch comedy series "Mr. Show" in the mid-'90s.

Since then Cross, 54, has enjoyed a diverse acting career in television ("Arrested Development") and film ("Men in Black") while never abandoning his roots in stand-up. This summer, his nerdy "white voice" is featured in the hit film, "Sorry to Bother You," an absurdist comedy written and directed by rapper Boots Riley of the Coup. "It's really a wild, cool, unique idea," Cross says of the film, which explores racism and class struggle through the surreal lens of telemarketing.

His current stand-up tour, "Oh, Come On," will find Cross and his wife, actress and author Amber Tamblyn, stopping in Richmond for two events. Cross will perform stand-up at Dominion Energy Center on Saturday, Aug. 4, while Tamblyn is scheduled to read from her debut novel, "Any Man," earlier that day at Fountain Bookstore with food writer Rekaya Gibson at 2 p.m. After the tour, Cross returns to Los Angeles to pitch a new show with Matt Besser that he can't talk about yet, he says.

Style caught up with Cross by phone last week.

Style Weekly: I know your old partner Bob had some ties to Virginia, he was best man in a friend of mine's wedding. Do you have any ties to ye olde Commonwealth?

Do you have Confederate monument material in your set?

I don't. I can whip some up if you like — I'll get cracking on a good solid three. Pull it out of my back pocket when I get there.

Oh very much so. It always does. I'm trying my best to keep the show to 75 minutes. I think that's a perfect spot. If there's an encore I'll do another 15. But I've had to drop things, other bits have expanded. And of course, I started June 1, stuff has happened. The end of the tour rarely resembles the beginning.

It's funny how different some big-name comedians are offstage, but your onstage persona really seems authentic, would you agree?

Oh, 100 percent yeah. I mean I might amplify some things for comic effect. But that's pretty much me. There are bits I do that are clearly bullshit, but if they're real, I don't exaggerate. All the stuff I say is pretty much true. … I don't want to do something just purely for shock value.

Politically speaking, you're fairly progressive — do you think the left has changed much in the past 10 years?

Well the left is a large group — you mean the überprogressive democratic socialist left, or the centrist left that wanted Hillary?

Let's say, überleft. If you're like me, you may have known people in the last election who defended their right to vote for Jill Stein to the death, which to me seems naive at best and pretty selfish at worst.

Yes, I completely agree with that statement. But I don't know anybody who made that known, who voted for Jill Stein. I know some people who abstained, which is just as bad. I think with the überleft, as we'll call 'em — and look, I don't want to make a generalization — but there are factions within those groups that are completely intolerant and willfully ignorant and as shut down as anybody on the right, or the crazy Trump cult people. I share their politics, but as human beings able to reason, be deductive, have a dialogue, they're just as bad. Not everybody, but … I think the PC intolerance of certain language and ideas has clearly gotten worse and more stringent. There's no gray area, no room for discussion. That's been happening for a couple decades now.

The Nazi fear is very real. We recently had Steve Bannon show up in a bookstore and someone confronted him, calling him out as a Nazi. The owner started to call the police, but the person left. Then there were online calls for boycotting the bookstore owner for defending Bannon.

Oh, that's ridiculous. Yeah there's a way to do that kind of stuff, that's not the best way … [But] the people who are educated know very well that Nazism didn't happen overnight. It happened in gradual degrees, and we're mimicking those today. … Outside of the Night of the Long Knives and the Reichstag fire, a lot of things have been put in place. We're not like Nazi Germany, but we're way closer to it than we were two years ago. [The left's] fear and anger comes from this gradual chipping away. … Sure, [racists] have always been around. I would offer that [the Nazi fear] wasn't about Charlottesville per se. There were around 400 white supremacists, 400 more than you want, but yeah that was their biggest rally in 20 years or whatever. However, it was the reaction after that which has people worried.

Yeah, now its words will get me fired and never rehired for the rest of my life. … I do workshop my material, but I've never shied away from anything. I'll talk about whatever I think is worthy.

Legendary comedians do take risks onstage that can easily be misunderstood. How do you think the next comedic great like Lenny Bruce or Richard Pryor or Bill Hicks will emerge in this climate?

Well, it's going to be somebody who isn't afraid. Those you mentioned were never afraid.

With all the pay-per-view outlets, why can't we have great cutting edge sketch comedy anymore?

I don't know. For me, part of the formula for a good one is it's got to be organic. It's got to be people who started from the ground up, not a collective that a person puts together of disparate people. Look at the classics: Python, "SCTV," early "SNL," "Mr. Show," "Kids in the Hall," you're talking about people who worked with each other, did theater shows, improv. It wasn't put together by a corporation.

From a career standpoint, do comedians really have to engage with social media, with Twitter these days?

I understand very well the benefits, promotional, all that stuff. For me, it's just not worth it. Now that I have a kid, any second spent on there and not with my kid is criminal. And there's just awfulness there. When you get off Twitter, it all magically goes away. All those people that hate on me, call me whatever fucking thing, it all goes away. I'll never see 'em. It's just yelling at an avatar. So I'm off of it. S