ACTION: In the Weeds

Can bureaucrats and restaurant owners form a symbiotic relationship?

“I get so many ideas, I’ve almost gotten to the point where I want to run for office.”

Soul Taco founder Trey Owens was born and raised in Richmond, experiencing the city as both a successful business owner and, at another point in his life, as someone in a less fortuitous position. He’s seen it all, and he’s ready to start seeing things change.
“
With Soul Taco taking off the way it has and with people in the community embracing it, it’s given me an opportunity to forge friendships with people who make policy so I can have some say or give my opinion,” Owens says.

One of those friends is 5th District City Council member Stephanie Lynch.

Lynch, along with the Economic Vitality Commission and the Office of Economic and Community Development, held a restaurant industry virtual town hall in December.

The panel included Jason Alley, the city’s provisional policy advisor for restaurants and small busines, council members, the city’s director of economic development, Leonard Sledge, state senators, and a representative from the ABC Board.

The bulk of the conversation centered on current and future alcohol regulations and what relief is available at the local level for restaurants. Folks tuning in could submit questions via the Zoom chat function, and Owens and a handful of other restaurateurs participated in a live Q&A after the hourlong panel.

Ostensibly, the town hall was meant to show restaurant owners and those deep in the industry trenches that yes, policymakers do want to hear from them.

However, the reality was a very tense back-and-forth, with more questions asked than answered.

A healthy, symbiotic relationship between boots-on-the-ground restaurant workers and policymakers at the local and state level will not happen overnight. It may take years, even decades. The city of Richmond – and cities across the world – are grappling with the financial fallout from the pandemic. Every sector wants to be heard, and every sensitive issue must be handled with great care.

“The meals tax is the highest around, it would have been nice to hear that a portion of the meals tax goes back to us,” says Kevin Liu, owner of the Jasper and Carytown Cupcakes. “We should get an automatic grant for supporting the rest of the community.”

“As our bills go up and there’s a decrease in revenue and the meals tax stays high, we could use some help,” adds Hot For Pizza and Cobra Cabana owner Herbie Abernethy. “If they could lower it for a little bit while we’re getting through this, it’s already been at one level they could dip it back down for a bit.”

The meals tax has been a point of contention ever since it was raised in 2018 from 6% to 7.5%. At the time, restaurant owners voiced their concerns, worrying that diners would choose restaurants in Henrico or Chesterfield counties with lower meals taxes over city of Richmond establishments. “Stop the Meals Tax” stickers were printed.

Restaurant owners organizing for or against certain policies is certainly not a new phenomenon here in the city. But there’s a real sense of urgency in this moment, now more than ever. A high meals tax and ABC red tape were concerning during the good times. Today, as restaurants struggle to pay their rent and their employees and keep customers safe and happy, these barriers can feel like insurmountable boulders.

Will there be any rent abatement? Why do we have to stop serving alcohol at 10 p.m.—we’re losing 28 hours of business a week. Why is there a requirement for one food order per two cocktails to go? The initial public parklet program was cost prohibitive; what are you doing to fix that?

As a longtime restaurateur himself, Alley understands just how tough these small businesses have it. And he readily admits that he doesn’t have all the answers they want but he’s trying.

He points to some of the actions the city has been able to take since he was named provisional policy advisor in November. “We just did a quarter million PPE drop-off, and we’re getting 200 heaters donated for small businesses,” he says.

Alley is putting together a proposal of city-owned parklets that would not be as costly as the initial program: “We’re really trying to start the conversation about what we can do to get people downtown once the weather breaks.”

He says he’s getting accustomed to the inner workings of bureaucracy, everything takes longer than you think it will and ideas and solutions must be moved through multiple channels. As far as his participation in the virtual town hall, Alley says he’s happy to see that the city is communicating better with the residents. 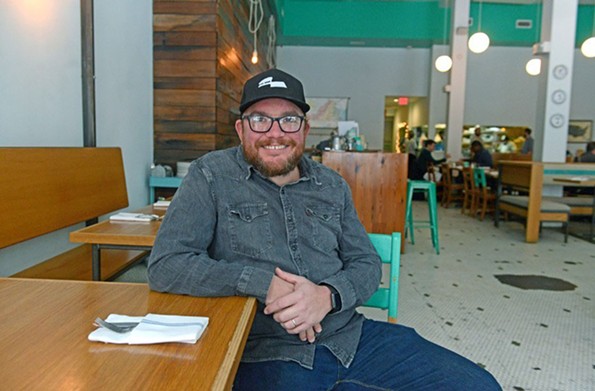 “There’s been a lot of confusion in the past about what can and cannot be done,” Alley says. “When people reach out with a question just being able to get them an answer relatively quickly, even if it isn’t always the answer they want, sometimes just getting an answer can help you move forward.”

For restaurant owners, moving forward might look like throwing their hat in the ring. “I feel like my vote doesn’t count,” says Abernethy in a phone call after a busy lunch rush. “Everyone says their hands are tied – well, who has loose hands? Do I have to run for City Council? It might be hard for me to run my restaurant and work for the city, but if I have to, I will.”

Owens has his sights set on an even higher position – mayor of Richmond. He currently operates Soul Taco out of three locations and plans to hold themed pop-ups throughout the year. He’s also busy, but if he has to run for office, he will.

“I don’t know that the people who are making these proposals – wherever they are, I don’t see them – fully understand the implication of what is happening right now,” Owens says. “In six to 12 months the stuff they just threw at the problem, will it only make it worse?”

Restaurant owners with questions, concerns or suggestions can reach Alley at Jason.Alley@richmondgov.com and Stephanie Lynch at stephanie.lynch@richmondgov.com.