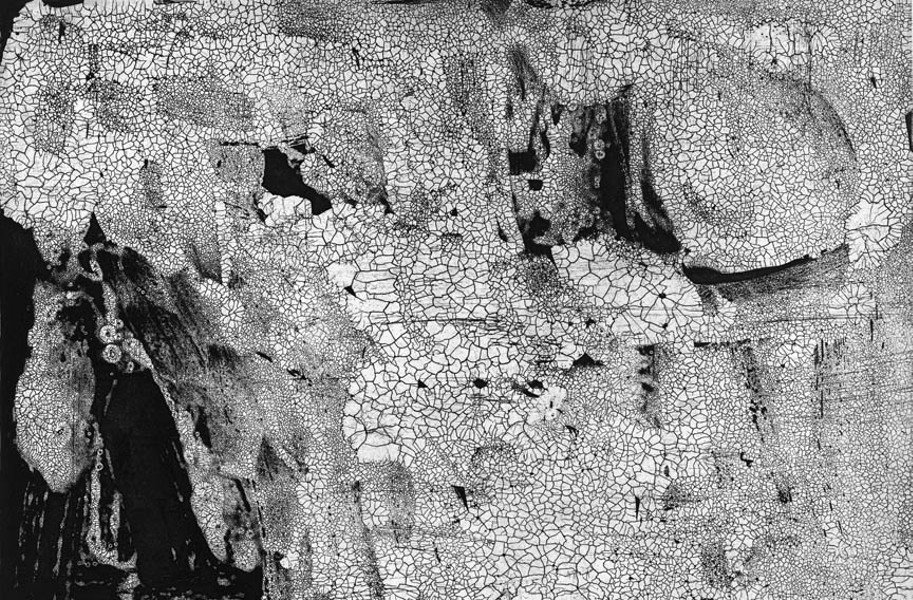 A work titled “CPP11” by Leonardo Drew described as a hard ground crackle etching with aquatint on paper.

Leonardo Drew’s laugh explodes like a solar flare. It’s not that he thinks you’re stupid. He just wants you to have more fun at failing.

“They were trained to think, ‘If it’s smashed, it’s trash,’” says Drew, recalling the absent-minded technicians who threw away his experiments. He recently wanted to find out if smashed clay sculptures would glue themselves together under high heat. The facility’s technicians were dumbfounded. “I said, ‘Smash it and put that shit in the oven!’ You have to challenge the craft, you have to challenge convention.”

It’s helpful to know about Drew’s freewheeling modus operandi when considering his new exhibit at the University of Richmond. Contrary to the fastidious conventions of printmaking, Drew’s work dives into the messy tactility of sculptural art. The prints resemble ruined cities, a common theme in his larger-than-life sculptures. Raw egg whites crack up into urban grids, as if seen in a satellite photo. These lonely planets are adorned with moody auroras, thanks to a mix of acid and warm resin called aquatint. The aftereffects of heat are on full display here, leaving viewers to contemplate an arid palette of gray, black, white and charcoal blue.

Drew’s iconoclastic tendencies might come as a surprise. He’s been through the manicured channels, like Cooper Union and Parsons School of Design. His work is in the permanent collections of the Guggenheim Museum, the Metropolitan Museum of Art and the Hirshhorn Museum. Yet he’s been driven to torment his massive sculptures with fire, weather and oxidation. Pieces of metal, mud, cotton and wood are puzzled into existential streets and skylines. With this Anselm Kiefer level of gravitas, there’s plenty of room to fail. For one thing, critics think the sculptures are made of found objects.

But Drew wanted to keep letting things fall apart. Deciding that photography is too often a “prettified surface,” he departed for Crown Point Press in San Francisco. “Processes and Permutations” is the resulting exhibit from those West Coast sessions.

“I’m not going in thinking like a printmaker and I’m not going in to respect the medium,” says the 56-year-old artist from his Brooklyn studio. He’s got classic Western films playing in every room, perhaps one of his few traditional attachments. He’s also a fan of modernist Piet Mondrian, who’s famous for paintings of yellow, red and blue grids. At 15, too, Drew entertained deals from Marvel and DC Comics. But rebellion persisted. Asked how he even knew where to begin at Crown Point Press, his fireball laugh suddenly erupts again.

“Now that’s some question. My aim is not to make replicas. I’m going to assault and bastardize the plates as we go along, in order to get more out of them. So each print has its own life. They’re going to be in the same family, but the master copy will not be the same as when I started.”

It remains to be seen whether such creations will appeal to a wide audience in Richmond. This type of process art encourages viewers to value the creative journey as much as the end product. When Drew came to the Virginia Museum of Fine Arts in 2000, there were no gradually rusting sculptural rings near the T. Tyler Potterfield Memorial Bridge. There were certainly fewer local murals, which take on the grime of their urban settings. These looser forms of process art seem to have as many detractors as proponents.

But while the rusty riverside rings bear no social commentary, Drew affirms the influence of growing up in a public housing project next to a landfill. Critics like Franklin Einspruch, writing for Boston’s Art Fuse, pooh-pooh this feature of Drew’s work as “low-hanging fruit for the critical establishment.” Then again, “Processes and Permutations” might scratch an itch for those who were hoping to see avant-garde pieces at the Institute for Contemporary Art, whose fall opening has been postponed.

The real joy in this exhibit lies in its visceral quality. “CPP8,” one highlight of the exhibit, appears to be an expansive frontier, as if viewers have reached the city limits of Drew’s metropolises. It’s probably best to ignore the printmaking jargon, which describes the piece as a “flat bite toner transfer with soft ground etching printed in graphite on gampi paper chine collé.”

“If you challenge yourself, there’s a pain ratio,” says Drew, before returning to his day’s work. “It comes at a cost. A lot of artists will say, ‘Oh, that’s going to cost too much blood.’ But then the work comes out as expected, a formulaic signature.”

When something becomes too comfortable, you’ve got to tie your hands, he says. “That’s how I got to where I am now.” S

“Processes and Permutations: Prints by Leonardo Drew” is on display at the Joel and Lila Harnett Print Study Center at the University of Richmond Museums through Dec. 8.