Comedian Dave Attell has made a living as a wise-cracking tour guide of the night. 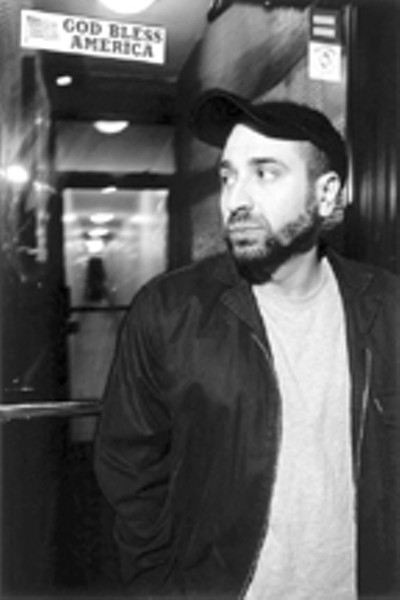 For a guy who made a name for himself in seedy comedy clubs and bars, how does a theater tour fit in? Style talked to Attell earlier this month after a show in Kansas City, Mo.

Style: How did you get the idea for the show?

Attell: It’s kind of a basic night out on a town kind of show. I guess the twist is, unlike E!’s “Wild On” where it’s all the hottest people and the coolest places, and you know, bikini girls, it’s more like neighborhood bars and fetish bars and whatever is open late and then we see people that work late, usually jobs that nobody knows are going on late at night. I guess the thing that gets people excited about it is that it’s a show for everybody whether you’re a frat guy or some kind of a transsexual, it’s the kind of show where you run into anybody who’s out there, we just kind of do it until the sun comes up.

Some of the places you’ve been to, like Boise [Idaho], say, aren’t necessarily the coolest places. Do you think being from New York has made you curious about smaller town life?

That’s a good point. [So many] shows are about New York and L.A. Being on the road for as long as I have, you just realize that there’s so much more going on all over the country.

How do you describe your style of comedy?

Well, after last week I’d say it’s a style that’s coming to an end. No, I guess I’m a little dirty and inappropriate. I really don’t have a theme; I’m not really political or anything like that. I started doing stand-up comedy about 16, 17 years ago and mostly going on late night, so my stuff had to be a little more shocking for people to pay attention after a whole night of seeing people. I’d say I’d call it the educated d—k jokes.

Your style is pretty casual and you’re usually interacting with people and that’s exactly how your show is. How do you do that now on this tour when you’re playing bigger theaters?

Exactly. Yeah, it’s definitely something to get used to because I’m not used to working in theaters. This week was kind of like a shakedown cruise, you know like seeing what jokes would work, what jokes won’t. And I’m not the only guy out there so that’s the cool thing. When you’re a headliner in a club somewhere the show’s kind of on you. If you’re not funny people are going to be leaving saying it sucks, but here with me and Lewis [Black] flip-flopping who closes and with Mitch Hedberg [opening], there are a lot of other comics to blame if it doesn’t work.

How long does it take to film an episode?

It takes about a week. A couple of days scouting, a couple of days shooting, it has to do with logistics. Moving a whole crew around in a city, especially on a weekend night, there’s lots of traffic, there’s lots of people who are too busy to talk to us, like the [people with night jobs], so we have to wait for the next day. The real thing is that we’re up all night for about a week.

Is it hard to get people to not perform when they see the cameras?

Now it is. But that’s just the way it is. [The show] is a victim of it catching on. It’s not something that I thought would go on for years and years and years. I was really surprised that it went as long as it did. I don’t want it to end up being tame and lame. People — once they find out we’re shooting — they kind of want to follow us around and that kind of stuff. We only travel with a couple of people so it’s not like we can do a big lockdown, crowd-control kind of a thing.

This is your fourth season and you went to Europe. How did you have to change what you’re doing?

People aren’t used to cameras on the street like they are here in the states, so it was kind of like the beginning of the show again, walking around having to explain what we do. Some people are hostile, some people don’t want to be in it, and that’s cool, so we just move onto the next group.

What’s the most interesting night job or event or place you’ve come across?

I think the late-night farm stuff is most interesting, like working on a dairy farm, seeing all that stuff going on all night long, or going to a pig farm seeing pigs being born in Columbus, Ohio. That’s the way the show can surprise people. If you’ve been looking at people drinking and girls going wild then the pig farm or coal mine, people aren’t thinking that that kind of stuff is going on too, but it is.

This is the last season of “Insomniac,” what are you going to do next?

This tour is a pretty big thing for me. We’ve got a new DVD coming out Oct. 24. Hopefully I’d like to think of another idea, maybe another thing for TV, but I’m pretty happy with the way things are going right now, this is kind of a good time for me. It’s amazing how before the show it was really hard to even fill a club with people. Now I started selling out the clubs and now I’m doing theaters. I really feel like even though comedywise I’m not on the level of some of those nation acts, like a George Carlin, but I’m hoping that this will help me take it up a notch, my comedy. That’s really what I do, the show was always a side thing. S