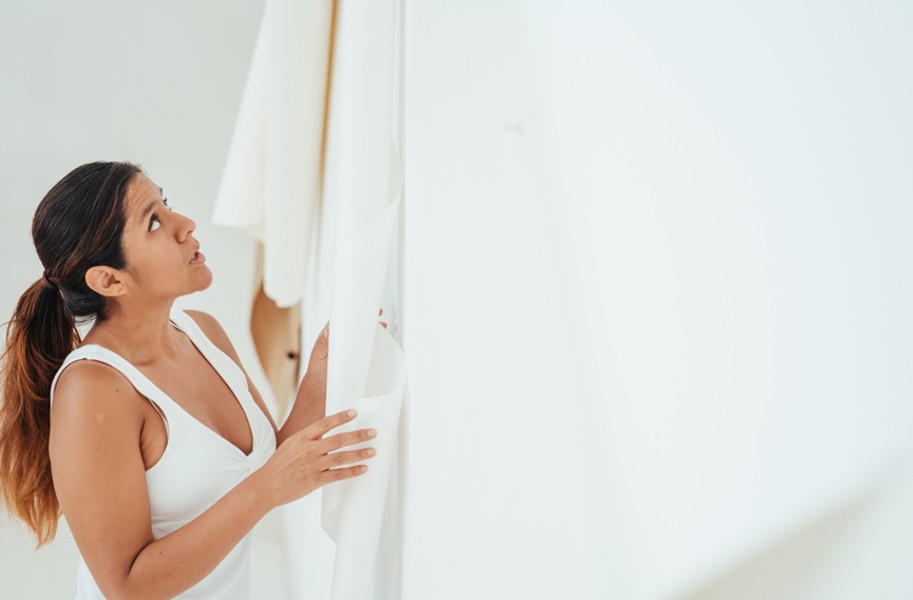 Artist Maria Chavez, originally from Lima, Peru, and now based in Brooklyn, is pushing the narrowly confined corners of sound art as defined by the art market and museums.

Brooklyn-based artist Maria Chavez is unconventional. A college dropout, she is now something of an academic darling. She regularly receives invitations from universities to teach workshops and her art is featured in textbooks.

Unable to hear until she was 2 when her mother brought her from Peru to the United States and doctors discovered that her ears were clogged with water, she has been a sound artist since the early 2000s, working to broaden its audience outside the confines of academia. And she's a woman who makes a living as a DJ, curator and turntablist performing around the world.

She's not a musician. She identifies herself as an abstract turntablist, a term she coined around 2001. Unlike a hip-hop turntablist who loops recognizable sounds, an abstract turntablist uses improvisation to record seconds of sound into a new track that audiences can't recognize. These segments are intentionally jarring and unmelodic, made up of accidents, flaws and imperfections. Sonically, her work pays homage to the late groundbreaking experimental composer Pauline Oliveros, whom Chavez considers a mentor. She helped Chavez gain a foothold in the sound-art community.

Paradoxically, although Chavez made her mark in audio, for the last two years she has conceptualized sound in a different way than emitted noise. Her latest work, a series of drawings and paintings that she started while a Robert Rauschenberg fellow, offer commentary opposing the art market's treatment of sound art. Chavez points out that even though the art market and museums only recently recognized sound art, both have pushed sound art in a narrowly defined corner: either emitted sound or graphic score that can be bought and collected. Her work is non-commodifiable, meaning it doesn't exist as an album but rather a live event or YouTube video.

When she tells people about her solo exhibition at the University of Richmond, they quip "Oh, I didn't know you could paint." But for Chavez, "that's the moment that people realize that sound art can be more than just a sound installation. The imagery in the show (which is based on her earlier 2007 project of the same title) is still sonic derived."

For "Topography of Sound: Peaks and Valleys Series," at the University of Richmond Chavez mines stock photo images of microscopic vinyl records. She translates the photographs into topographic landscapes made with sumi ink or watercolor: record styluses become mountain peaks and vinyl grooves emerge as canyon valleys. By playing with scale — these two-dimensional works are large — she reinterprets found materials into majestic landscapes that engage the tradition of 19th century American landscape painters Fredric Edwin Church or Albert Bierstadt. Alongside her paintings and drawings, Chavez presents excerpts from her book, "Of Technique: Chance Procedures on Turntable."

"I was hoping to bring somebody here that would relate to the interest of our faculty and students and the bigger community. [Chavez] seemed like a perfect fit," explains the deputy director and curator of exhibitions at the University of Richmond Museums, Elizabeth Schlatter. "Ironically, the exhibition isn't about sound art — she's decided to go into this different direction. You're not going to walk in and necessarily think this is a sound art exhibition, but sound is the component that pulls everything together."

Chavez's work will be one of the kick-off events for Richmond's first Sound Art Festival organized by Director Vaughn Whitney Garland, with events running from April to October at locations including Maymont, Crossroads Art Center and the Virginia Museum of Fine Arts. Other happenings sponsored by the University of Richmond include a film screening of the 2010 Swedish-French film, "The Sound of Noise" and a performance of professor Benjamin Broening's "Lamentation Alphabet," based on the Hebrew alphabet, at the Cathedral of the Sacred Heart.

"Topography of Sound: Peaks & Valleys Series, New Work by Maria Chavez" is open through May 11 at the Joel and Lila Harnett Museum of Art. Visit museums.richmond.edu for information. For a lineup of events related to Sound Arts Richmond, visit soundsartsrva.wpengine.com.