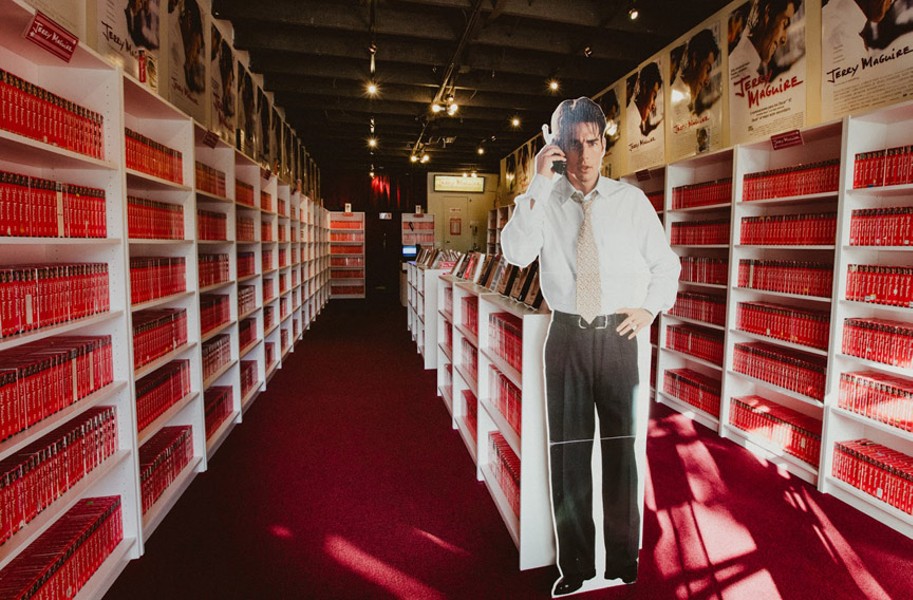 A Jerry Maguire Video Store was opened at iam8Bit Gallery off Sunset Boulevard in Los Angeles for 13 days last year. These and many other Jerry Maguire VHS tapes are being collected to form a pyramid in the Arizona desert.

Somewhere in the northwest Arizona desert, a plot of land has been found and plans for a new pyramid are being drawn.

Not just any old pyramid, mind you. This will be composed of more than 16,000 identical VHS copies of the movie "Jerry Maguire" starring Tom Cruise.

It's one of the more memorable performance art projects by a loose collective of found-footage video collage artists known as Everything Is Terrible.

"It might take the rest of our lives, but we're going to build this giant monument to our own civilization's mediocrity," says group co-founder Commodore Gilgamesh from Los Angeles. "And it's going to be beautiful. It's going to outshine anything Jerry Maguire could've ever been." He agrees that someday, people might even travel there to marry beneath its unholy red-and-white glow.

"I think 'Jerry Maguire' on VHS is kind of the antithesis of everything we want: total vanilla, totally fine. They did a fine job, everybody likes it," he says. "But there are so many of them. We would be at thrift stores and they would always be there."

One-by-one, the group began hoarding them to "protect them forever, so that when we die, they'll be safe," he says. Fans started to bring them to live shows or mail them as donations: Even the film's director, Cameron Crowe, sent 15 pristine copies. Gilgamesh is quick to add that they always need more.

It was a stupid joke that grew out of control, he says, embodying its own commentary on the wastefulness of overdriven consumer culture.

But they had me at Everything Is Terrible.

The group is coming to Richmond to screen its latest video, "The Great Satan," created after two years of editing 'Satanic-panic' videos, religious kooks and gory, D-movie horror clips. There's even a blink-and-you'll-miss-it cameo by RVA's own departed legend, Oderus Urungus of Gwar. Not to mention a bewildering musical clip of the Bee Gees singing one of their early hit songs with the altered lyrics, "You don't know what it's like/to lose your penis."

"That Bee Gees clip is one of the greatest clips I think we'll ever have," Gilgamesh says, adding that the entire video is meant to overwhelm and confuse. "Also Gwar is a big inspiration for us. We're like the Gwar of found footage."

This might remind some people of a different touring group, the Found Footage Fest duo, which has performed here using stand-up comedy as a format for introducing similarly whacked-out videos. But Everything Is Terrible is more transformational in its editing approach, as well as adding live performance. It has built a maniacal world around "The Great Satan" with giant costumes and puppets that fit their zany narratives.

Gilgamesh considers the Found Footage Fest guys a "gateway drug" to their harder, mind-melting approach, which has to be tempered in the live setting.

"We realized that our videos tend to hurt people's psyches by the end. So we're breaking it up to make it more of an interactive experience," he explains, noting that the thematic inspiration for "The Great Satan" started with Christian propaganda videos from the '80s starring Kirk Cameron.

Most of the collective's members are in their mid-30s. The core group met at Ohio University in the early 2000s and they have since have made thousands of videos including a faithful remake of Alejandro Jodorowsky's cult film, "The Holy Mountain," using only dog movies. LA Weekly described them as "Bruce Conner for the information age."

Touring the country allows them to stay on the lookout for source material: Gilgamesh says thrift stores in Florida and Greenville, South Carolina, have provided some of their best scores.

Over the past decade, their cultural criticism has sharpened.

"I think our work has honed in on sexism, racism, homophobia and extreme capitalism," he says. "We've figured out how to not be mean and to focus on shooting our criticism up the ladder to the power structure in charge." For example, one unspoken rule was never to use footage of fitness guru Richard Simmons.

The resulting work is protected by fair use law, "but like any law, it only works if you're rich," Gilgamesh says, adding that nobody has sued them yet.

However, this isn't the case for the Found Footage Fest guys. They're currently fighting a lawsuit for using video of themselves appearing under false pretenses on a Midwestern television station. They went on air as a fake strongman duo, Chop and Steele, crushing baskets with their feet — just the latest goofball performance in an ongoing effort to illustrate how little television news outlets vet their subjects.

The Everything Is Terrible collective's popularity has coincided with a growing niche of young viewers attracted by the low cost and high schmaltz of VHS tapes.

"I think we have a shared cultural memory and we tap into nostalgia that people maybe haven't even personally experienced," Gilgamesh says, referring to their younger fans. "But they recognize the tone. Personally I hate nostalgia, it's not really productive. But I think it's awesome for us to use as the worm on the hook."

Famous fans of the collective include Conan O'Brien, Mike Judge, Nick Offerman, Erykah Badu and Reggie Watts. It has been featured on Adult Swim and holds an annual Everything Is Festival that draws B-movie and found footage fanatics.

But it will be hard to top the Jerry Maguire pyramid.

The self-described "stupidest incarnation of the American dream," is seeking to raise $400,000 through a Go-Fund Me campaign. It currently has raised $887 dollars.

"I'm going to die under an avalanche of VHS tapes which is not good," Gilgamesh says. "Come say hi to me at the show. I'll be dressed as Satan." S

Everything Is Terrible performs "The Great Satan" at Strange Matter on Tuesday, March 6 at 8 p.m. $10 in advance, $12 at the door. Please bring any extra "Jerry Maguire" videotapes.