360 degrees of beauty at VMFA. 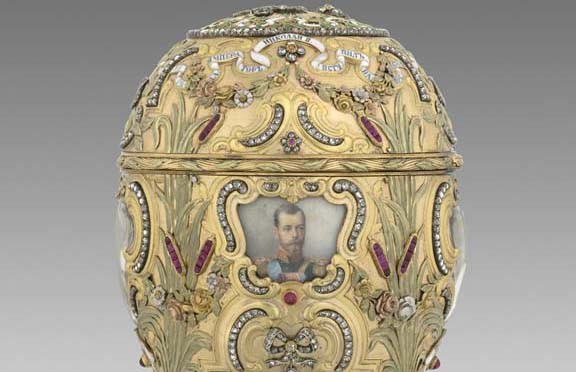 The scene at Boulevard and Hanover Avenue carries a snail's pace compared to the crossroads Mark A. Schaffer confronts most workdays. He and his family operate A La Vieille Russie, a purveyor of Russian decorative arts on Manhattan's Fifth Avenue near 59th Street, across the street from the Plaza Hotel.

On Wednesday, July 6, Schaffer stands in the light-flooded atrium of the Virginia Museum of Fine Arts at a preview of "Fabergé Revealed." The ambitious and handsomely installed exhibition takes a comprehensive and refreshingly clear-eyed look at the museum's Lillian Thomas Pratt collection of Russian imperial objects. This link to the extravagant tastes of the rich and famous in pre-World War I Europe has long been a jewel in the museum's crown, literally and figuratively. Also included in the exhibit are items from the Matilda Geddings Gray collection, the Hodges collections and pieces from the Arthur and Dorothy McFerrin Foundation. Style Weekly is one of the exhibit's media sponsors.

As a hundred reporters and hospitality industry reps sip coffee, Fabergé scholar and exhibition guest curator Geza von Habsburg offers introductory remarks. Later that day, Schaffer joins von Habsburg and others at a Fabergé symposium. Schaffer's talk, like his essay in the exhibition's informative and magnificently illustrated catalog, addresses the Depression-era business relationship between his grandparents, Alexander and Ray Schaffer, dealers in fine Russian objects, and one of their most enthusiastic customers, Lillian Thomas Pratt.

Pratt lived near Fredericksburg and was married to a General Motors executive who didn't necessarily share her enthusiasm for all things Fabergé. During the 1930s and '40s, exquisitely crafted Fabergé objects, many closely associated with Russia's deposed royal family, were being dispersed by the Soviet Union into Western collections like Pratt's.

As the VMFA's guests feast their eyes on the 500-piece exhibition, the impeccably tailored Schaffer is pleased to finally be examining the objects. "Mrs. Pratt was buying these pieces because she truly loved them," Schaffer says as he walks through the first and second gallery spaces, which examine Fabergé works in silver and cloisonné, respectively.

Schaffer purposefully makes his way to the exhibition's third section, which focuses on Fabergé's works in gold. He stops and stands silently in front of a case containing a single object that marks the pinnacle of Pratt's collecting: the "Imperial Peter the Great Easter Egg." Pratt had admired the Peter egg for quite some time, Schaffer says. Commissioned in 1903 to mark the bicentennial of the founding of St. Petersburg, it was presented by Czar Nicholas II to Alexandra Feodorovna. "It was in the 1936 inaugural exhibition that my grandparents had when our gallery opened in Rockefeller Center," Schaffer says.

Two years later, while the egg was evidently still on Pratt's mind, she'd come to grips with the fact that someone else would purchase it: "It breaks my heart to lose it," she wrote the Schaffers. "I cannot possibly pay for it this year." But somehow, by autumn 1939, the egg had been shipped to Pratt in Virginia. She paid for it in monthly installments during the next few years.

Given a prime place in "Fabergé Revealed," the egg is beguiling in the way one might expect when gold, platinum, diamonds, rubies, sapphire, rock crystal and enamel come together with Fabergé's alchemy. For the first time at the VMFA, it can be seen from 360 degrees (as can the museum's other four imperial Easter eggs). Schaffer explains that when the egg is tilted open, a statute of Peter the Great arises and is viewed against a dazzling sunrise of gold enamel. As exhibited, the statue has been removed and placed next to the closed egg.

The museum has heretofore presented the Pratt collection reverentially. A prized possession since 1954, it was first installed in a dimly lit gallery with objects displayed on red velvet — Richmond's version of the Tower of London's crown jewels. Most recently the collection was shown in a gallery that had the plush, overstuffed look of a Victorian-era ladies' shop. "Fabergé Revealed," however, offers a less gauzy and more accessible installation and a deromanticized narrative. In his concise catalog essay, Schaffer writes that the correspondence between his grandparents and Pratt reveals how the patron scrimped and saved — even seeking bank loans (which she was occasionally denied) — to pay for the various Fabergé objects she sought.

Sometimes she was duped. A number of objects, many of which she purchased from another well-known Russian decorative arts dealer, Armand Hammer, have been deemed fakes. A final section of the exhibit (beyond translucent objects, smaller Easter eggs and hard stones) focuses on what curator Von Habsburg coins "Fauxbergé." Even in his own time, Fabergé was so concerned with rip-offs that he was hesitant to publish his work.

If "Fabergé Revealed" offers fascinating glimpses into connoisseurship, Schaffer says it also gives insights as to certain tastes at the turn of the last century: "It's an entry into that period because these objects were functional," he says. "There were corporate match cases, bell pulls or picture frames, but they were also beautiful works of art. Fabergé showed that the decorative arts could rival the fine arts."

Indeed. This eye candy won't just make your eyes hurt—your teeth will hurt. One can understand how Lillian Pratt got addicted. S