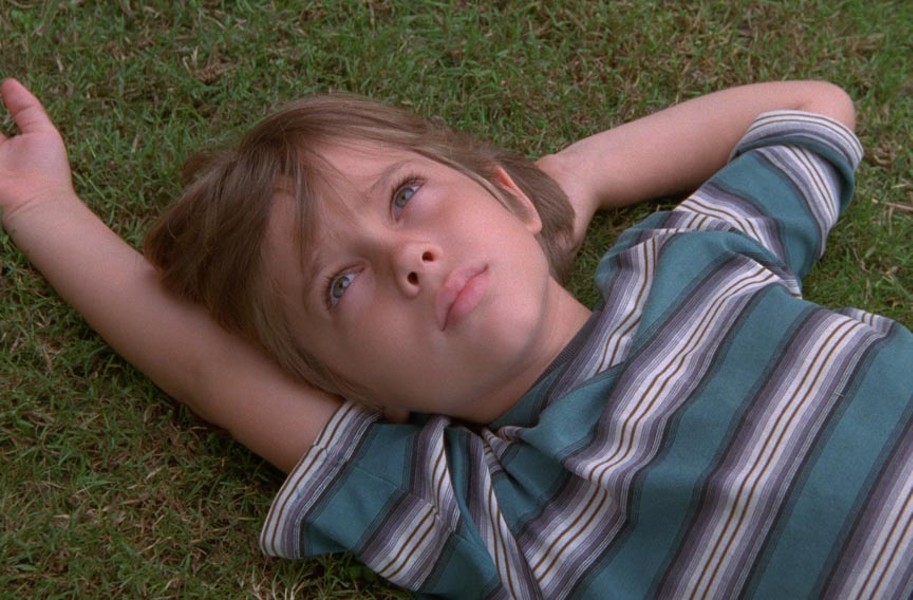 It took writer and director Richard Linklater 12 years to make the film “Boyhood.” He shot it intermittently, the ages of his cast matching the ages of his characters, so he could more realistically tell the story of a boy’s growing up, from the age of around 6 to 19.

The boy is Mason (Ellar Coltrane), and his story, as the title indicates, is about his boyhood and its broader realm of family and school life — his relationship to his parents, Olivia (Patricia Arquette) and Mason Sr. (Ethan Hawke), and his sister, Samantha (Lorelei Linklater), and all their doings, both good times and bad. Making friends, transferring to new schools, learning about the world.

To a point, the technique adds an extra layer of realism to Linklater’s well-known, loose, fly-on-the-wall style, conspicuous in such films as “Slacker,” “Dazed and Confused” and “Before Sunrise” and its sequels.

If you know those films, you won’t be surprised to find that “Boyhood” focuses on the seemingly mundane — the normal ups and downs of its characters’ lives, including the financial and personal difficulties of the parents, who are split by the time the story gets underway, and the everyday hurdles of growing up.

Critical response has been overwhelming positive, although audience response has been mixed. The film is very long, clocking in at around two hours and 45 minutes. And it’s a matter of interpretation and personal taste whether the subject matter is on par with Linklater’s impressive high-concept method.

For the first 15 to 30 minutes, I thought I was watching the shoddiest mainstream, wide-release film I’d ever seen. The acting by the children at their youngest is — perhaps understandably — awkward (Linklater deserves no leniency, however, for casting his own daughter, who improves the least over time). Arquette was a mistake. She starts off shaky and shows no sign of aging well. She does her best through most of the film, but her best is a blandness that bespeaks limited range.

Hawke seems pulled down by the rest of the cast in the film’s early scenes. The story and staging isn’t much better there, with all these elements combining to make the first third of “Boyhood” come across like a middling ABC after-school special.

But “Boyhood” improves substantially as it goes along. The child actors get better with age, Coltrane especially, and the story gradually draws you in, operating on a level similar to a television drama because of its length and melodramatic subject matter. The more you get to know these characters, the more you want to see what happens to them next.

I like melodrama. I like it on television and at the movies. Overall I like “Boyhood.” Some of its melodrama is very nicely observed and the story wraps up well, in a way that makes you reconsider the film’s collection of the mundane as a statement unto itself. Instead of “all the world’s a stage,” maybe all our lives are stories.

But it can be tough getting to that ending, subjected to seemingly endless everyday events, scenes where the family goes bowling or moves to a new city, for example. Some of these events are quite brilliantly thought out and executed, and even echo back on themselves. In one scene, Mason Sr. gives his son very interesting, candid advice. Soon after, he gets caught not taking that advice himself, but so subtly does the episode pass that you might miss it. In this way the mundane sometimes accumulates into something grander.

I saw “Boyhood” at home, with a lot of breaks. It was difficult to get through, but I was glad I stuck with it and satisfied with what it seemed to want to be, a demonstration that everyday life eventually forms the fabric of our being, that you never know which seemingly routine moment might be defining, and that all those moments add up to more than their sum. Those things are important to remember, but for me it doesn’t make the film a “miracle” or a “masterpiece” or any of the other superlatives decreed by so many critics. “Boyhood” as of this writing boasts a perfect 100-percent positive rating on the review aggregator Metacritic.com. Arguably the enthusiasm for Linklater’s experiment has boosted its esteem a little, but that isn’t so terrible. It’s reminiscent of the way a young man like Mason, going off to college, is so charmingly exuberant about ideas others might not find as astonishing. Perspective is as key to life as exuberance, and as well to “Boyhood.” (R) 164 min. S