A Year for the Ear

Our music critics rate the best recordings and performances of 2008. 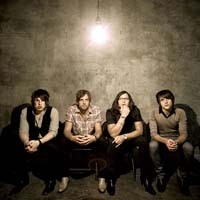 Hilary Langford, Pop
Recordings
1. Kings of Leon, “Only by the Night” (RCA): Growling riffs, a touch of reverb and hooky refrains delivered by Caleb Followill's dreamy rasp renders this one a little nugget of man-rock perfection.
2. Santogold, “Santogold” (Downtown): Armed with funky-fresh, electro beats and a voice of varied incarnations, Brooklyn's finest turns out a disc that's astonishingly creative, yet accessible: rock 'n' reggaeton, future-flavored goodness.
3. The Duke Spirit, “Neptune” (Artist First): “The Step and the Walk” is one of the most alluring singles I've heard in years. A sultry female lead, warm bass throbs and an upbeat tempo, topped off a chorus that will stick in your head for days. The rest of the album follows suit with a fistful of solid, blues-infused backbeats and a distinctive British bite.

Performances
1. Gogol Bordello at Toad's Place (June 19): If there was ever a band to make you want to run away with the gypsies … no, make that run away naked with the gypsies, this is it. Eugene Hust and company riles Toad's Place up into a frenzy complete with dancing girls, accordions and plenty of beer-sloshingly good anthems.
2. Rilo Kiley at Toad's Place (June 8): We all hope for Jenny Lewis in hot pants, but alas there is none. We do get a killer set from the Los Angeles quartet chock full of hits, though it probably could have used a few older songs as well.
3. The New Pornographers at Toad's Place (April 16): Neko Case doesn't always tour with the band, so when she shows it's good fortune. She might have been on crutches, but that doesn't stop the collective, shiny, happy voice of the Pornographers that might very well be a means to world peace.

Clarke Bustard, Classical
Recordings
1. Schoenberg, Sibelius: violin concertos. Hilary Hahn (violin), Swedish Radio Symphony/Esa-Pekka Salonen (Deutsche Grammophon) — Any question whether Hahn is the violinist who can get her figures, mind and heart around any music is answered in rapturous readings of Arnold Schoenberg's once-forbidding and Jean Sibelius' all-too-commonly frosty opuses.
2. Beethoven: Symphonies Nos. 1, 6 (“Pastoral”). Minnesota Orchestra/Osmo VAnskA (BIS) — One of the best, and definitely the best recorded, of the many cycles of Beethoven's nine symphonies hits its stride in a sprightly, classically inflected First and propulsive, rustic Sixth.
3. “Dinu Lipatti: the Master Pianist” (EMI Classics) — A bargain-priced, seven-disc reissue of every commercially issued recording by Lipatti, the most poetic of the mid-20th century piano virtuosos and, tragically, one of the shortest-lived. He died of leukemia in 1950, just 33 years old. The set includes performances of Bach, Mozart, Chopin, Schubert, Schumann and Grieg that still set standards of musicality.

Performances
1. Pascal RogAc at Virginia Commonwealth University (March 1) — The French pianist carries a rapt audience into a rarified sound world, surveying the forms — nocturnes, waltzes and etudes — bequeathed by Chopin to subsequent generations of French composers.
2. Eighth blackbird at the University of Richmond (March 26) — For one night, UR is ground zero for new music, as its Grammy Award-winning resident sextet doubles its previously recorded self in the premiere of an unexpectedly lyrical Double Sextet by Steve Reich, and followed up by introducing “singing in the dead of night,” a stylistically omnivorous marathon of music and choreography by David Lang, Michael Gordon, Julia Wolfe and Susan Marshall.
3. Richmond Symphony at Bon Air Baptist Church (Oct. 3) — Daniel Meyer, one of the candidates vying to become the symphony's next music director, opens the season's four-concert Haydn Festival with a sampler of orchestral, choral and chamber music that showcases Haydn's singular combination of elegance, earthiness and wit, and captures the composer's often elusive style.

Craig Belcher, R&B, Hip Hop and Soul
Recordings
1. DJ Premier “Beats That Collected Dust” (Year Round Records) — DJ Premier collects the rejects from his work with top-notch artists and pastes together an cohesive, engaging album.
2. Jamie Lidell “Jim” (Warp Records) — The UK soul man leaves the hard edges of his laptop funk behind and emerges with a dynamic album that never lets up. Go get it.
3. Estelle “Shine” (Atlantic) — With some help from John Legend, Estelle proves the soul revival across the pond isn't just for white girls.

Performances
1. Nas at Fridays at Sunset (June 27) — Queensbridge's finest rap artist makes a rare Richmond appearance and leaves the crowd wanting more of that New York sound.
2. Babyface at the National (Feb. 28) — If the National books more R&B acts, compelling performances like this one could receive the audience and venue they deserve.
3. Anthony Hamilton Fridays at Sunset (Aug. 8) — The diminutive singer recalls the explosive performances of Richmond's wayward son, D'Angelo, for whom he once sang backup, during this energetic show at Kanawha Plaza.

Peter McElhinney, Jazz
Recordings
1. Charles Lloyd, “Rabo de Nube” (ECM) — The master saxophonist's new quartet with pianist Jason Moran adds a brilliant new dimension to the third decade of one of the greatest comebacks in jazz.
2. Dave Holland, “Pass It On” (Dare2) — A new configuration of the great bassist's band is made even more Minguslike by the elegant blues touch of pianist Mulgrew Miller.
3. John Zorn, “The Dreamers” (Tzadik) — The master of the forbidding thickets of the avant-garde is reborn as an engaging melodic magician.

Performances
1. The Mingus Awareness Project at Gallery5 (Oct. 26) — It's not the most varied of drummer and presenter Brian Jones' many projects (that would be the free-for-all Musicircus). But this second edition of the MAP features the now nationally-known Fight the Big Bull in addition to Jones' trio and a big band playing to a standing room crowd.
2. Regina Carter at the Modlin Center (April 4) — The recent MacArthur prize winner has played Richmond before but has never been so charismatic, relaxed and brilliant.
3. The two complementary performances of Doug Richard's expansion of “A Mare Encheu” (Jan. 12/March 28) — One features brilliant playing in the Landmark acoustic hellhole, the other with VCU's student orchestra in a hall where the choir is intelligible.

Brent Baldwin, Rock, Folk, etc.
Recordings
1. Randy Newman, “Harps and Angels” (Nonesuch) — He's won just about every songwriting award there is, but Newman still has gas left in the tank — tackling his own mortality and politics-as-usual with tasteful piano work, a Dixieland combo and occasional full orchestra — not to mention his always wry humor.
2. Vivian Girls “Self-titled” (In the Red Records) — This three-piece girl group from Brooklyn delivers a sloppy but fun debut that's only 21 minutes long, but oh what glorious, lo-fi rock minutes they are: banging, reverb-drenched guitar and sweet harmonies evoke '60s girl-group spirit with surf pop and choice punk influences such as Greg Sage.
3. Fleet Foxes, “Self-titled” (Sub Pop) — Oft compared to the Beach Boys, this Seattle band hops the folk renaissance train a few years late, but still manages to craft an interesting, harmony-filled record that grows on you like some mutating, hippie beard from another planet. This is what too much rain sounds like.

Performances
1. Gogol Bordello at Toads Place (June 19) — There's a reason this 10-piece, multiethnic group was voted best live band in New York City. Electrifying, upbeat cabaret punk smuggles in Gypsy influences with crowd-pleasing theatrical flare.
2. Levon Helm at the Paramount Theater in Charlottesville (Sept. 14) — The legendary drummer and singer from the Band wins a battle with throat cancer and makes his triumphant return, scoring a Grammy for best folk album, and delivering an emotional powerhouse show that features classic Band tracks mixed with gritty blues and traditional folk from an all-star band.
3. Lou Reed at the National (April 26) — The legendary Velvet Underground frontman brings a top-notch rock band with him, including Rob Wasserman on bass and Steve Hunter on guitar — but hearing the classic “Pale Blue Eyes” encore in an intimate setting is nearly worth the admission alone. S