A Vision in Black

From folk art to hip hop, VMFA’s “The Dirty South” is a wide-ranging meditation on Black culture and creativity. 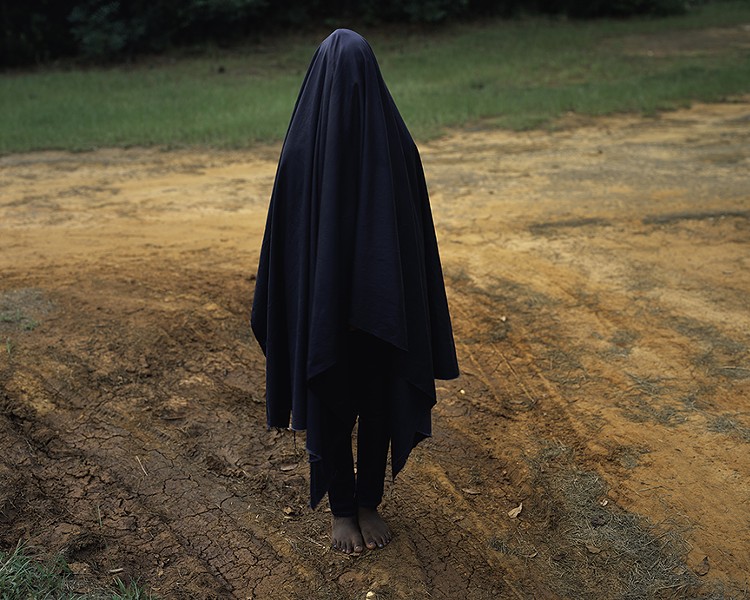 Blackness – that is, the cultural identity borne from the lived experiences of people of African descent – is as expansive as the sky.

And like the aerial plane, the longer you look, the more intriguing it becomes.

The Virginia Museum of Fine Arts is inviting the public to take a deeper look into the Southern vernacular of Blackness through the twin lenses of sound and sight via its provocative new exhibit, “The Dirty South: Contemporary Art, Material Culture, and the Sonic Impulse,” on view through Sept. 6. After that, a truncated version of the show will travel to art museums in Houston and Denver, among other cities.

But first, Richmond gets to be blown away by the original vision.

A massive show featuring some 140 works in a range of forms, the exhibit explores and reflects Black identity, culture and creative expression over a century-long span from 1920 to 2020. It is an immersive meditation on the singularly meaningful art created by Black artists from the South and evidence of how deeply these creators continue to influence and shape American and global culture in contemporary and historic ways.

There is much to see and hear. One of the most immediately visible objects is a pyramid-shaped installation of stacked television screens, most glowing with the same short, blue-toned video clip of a Black child swinging in play, the trunk of a tall tree hulking in the rear of the frame. The TVs are arranged in a sharp-edged design, commanding the viewer’s eye to scan skyward to take in the pinnacle of the mixed-media piece. On the floor in front of the pyramid, five or six TVs play two clips, one a black-and-white snippet of jazz icon Billie Holiday singing “Strange Fruit,” her lips straining as she intones again and again words from the song’s grim first verse, including a visceral description of lynched African Americans:

“Black bodies swinging in the Southern breeze/Strange fruit hangin’ from the poplar trees.”

Contemporary soul and R&B artist Jill Scott, in living color in the other clip, sings a snatch of her rendition of the same song, her vocal and facial expressions fierce. The wildly different connotations of a “swinging” Black body are on stark display: The innocent sweetness of the child swinging is juxtaposed with the anguish and dread conjured by the lyrics Scott and Holiday repeat from different decades. This 2018 piece, “Summer Breeze” by Paul Stephen Benjamin, is just one of the arresting, large-scale installations that encourage viewers to ponder aspects of Black identity, history and cultural contributions, using musical forms to stimulate these thoughts. 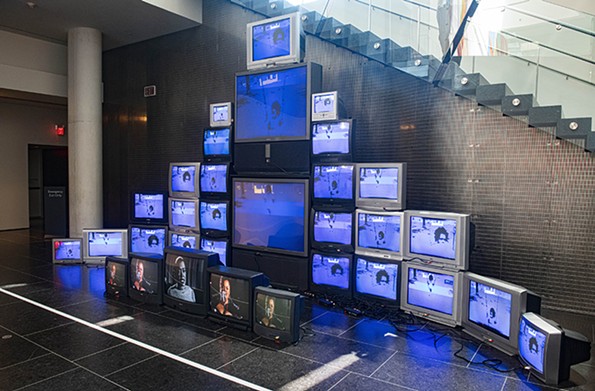 Another example is “Coronation Theme: Organon, 2008,” a towering sonic sculpture made of 30 stacked speakers by England-born American artist Nadine Robinson. According to its museum label, the piece “addresses complex narratives and historic moments through sound.” More specifically, the design of the speakers mimics the facade of the historic Ebenezer Baptist Church in Atlanta, Martin Luther King Jr.’s pastoral home until his 1968 assassination. The speakers play a haunting musical refrain inspired by a 1963 segregation protest in Birmingham, Alabama, where police attacked almost a thousand Black youth and young adults with snarling dogs and fire hoses. An ensemble belts out a choral anthem by George Frideric Handel, the familiar melody spliced with audio bits of prayers, chants, the booming barking of dogs and the hissing and dripping of water. 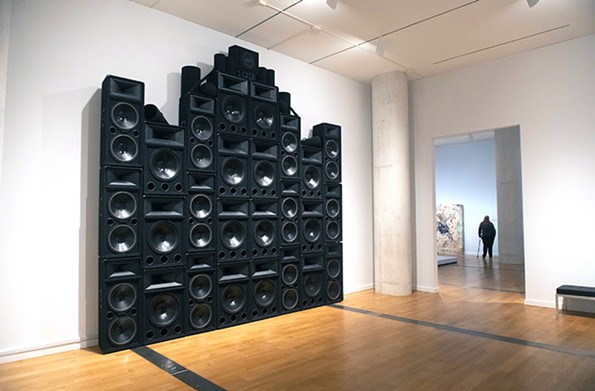 “STAGED: Slugs’ Saloon” is a can’t-miss, complex mixed media installation that appears, at first, pulled from the set of a movie about speak-easies or juke joints. Houston-born artist Jason Moran effectively re-creates an interior space of the legendary jazz nightclub in New York’s East Village, whose heyday spanned the socially and politically turbulent 1960s and ’70s. Trumpet prodigy and jazz composer Lee Morgan was fatally shot by his longtime companion Helen at Slugs’ in February 1972, his band playing despite a blizzard.

The artifacts that Moran includes in the arrangement – an ancient-looking cello propped in a corner, a frazzled drum brush slanted across the floor tom of a well-worn percussion set, a vintage Wurlitzer jukebox, an old-timey piano – give the impression that some shadowy jazz players have just stepped offstage for a break and will be back in 15 minutes or so, after they refresh themselves with a quick-sipped drink or a cigarette. The hallowed space Moran has created truly feels suffused with the spirit of jazz musicality, freedom and the strong emotions that this art form, created by Black people, provokes and reflects – ecstasy and agony among them. Moran will activate the piece during its time on view, invoking the ancestral legacies of Black musicians and linking visual and performing arts through musical performance onstage.

The interplay of audiovisual elements continues with the constant exploration of specific themes, such as the physical landscape of the Southern states and how its many rivers, swamps, forests and fields influence the art of Black people, as well as corporality and how the Black body is a site of memory, deep trauma yet also indefatigable joy.

The “Cabinet of Wonders,” filled with sound, video, and textile objects, presents the larger-than-life presences of innovative Black musicians including the Godfather of Soul, James Brown. The installation conjures Brown by way of a blue stage costume he performed in, displayed in a lofty compartment of a custom-built glass case and paired with a video clip of an aged Brown singing and dancing with trademark vigor during “Get on the Good Foot” at the Woodstock ’99 festival. Other Southern musical geniuses represented include guitarist Chuck Berry, the father of rock’n’roll, cosmic jazz composer Sun Ra, free jazz legend Ornette Coleman, whose alto sax is displayed, and modern soul singer CeeLo Green from Atlanta.

Pieces that speak to Black spirituality and diverse cultural religious traditions include paintings with scrawled, handwritten scripture by New Orleans evangelist and artist Sister Gertrude Morgan, her voice threading the space with spiritual songs accompanied by a jingling tambourine. Gelatin silver prints of Earlie Hudnall Jr.’s photos depict a dilapidated Baptist church in Mississippi, haunting in its decaying beauty and a scene of fervor sweeping a crowd of worshippers in Houston’s 3rd Ward. 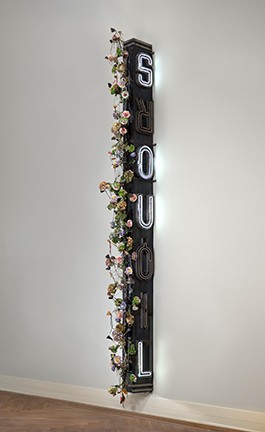 Perhaps the most powerful aspect of the exhibit, in this writer’s mind, is a 7-minute, 25-second-long film installation by video artist and son of Mississippi, Arthur Jafa. In a cavernous, dark room, a huge screen projects rapid-fire images and clips that represent the vastness of Blackness, flickering detail revealing instances of joy, pain, sorrow, anger and hope. Black-and-white footage of teenage Civil Rights-era protesters playfully high stepping and singing even as they defend their dignity; a tearful Black child screaming into his mother’s face, his own screwed up in frustration; the fluid, athletic grace of a basketball team wearing royal blue jerseys and brown skins; superstar and Southern woman, Beyonce, whirling in a rapturous, impromptu dance on a hotel balcony; the last moments of a Black man’s life caught on grainy cell phone video, his body crumpling to the ground as bullets fired by police tear through him. All of these scenes and many others are presented in an almost dizzying, stream-of-consciousness array that is at once awesome and awful, sad and sacred, hilarious and heinous.

The thrilling harmony of a gospel choir resonates as the soundtrack with Kanye West’s 2016 hit “Ultralight Beam” buoying the emotive impact of the work. When West’s voice insists repeatedly, “This is a God dream/This is everything,” while images of divinely talented, deeply abused, boldly brilliant, unapologetically Black people fill the screen – I believe him. Indeed, only a higher power could chart the course of Black people’s diaspora journey. Such was the spiritual power of this piece that I could not look away; it demands the viewer’s attention and points towards a future of more nuanced representations of Blackness in all of its complexity. 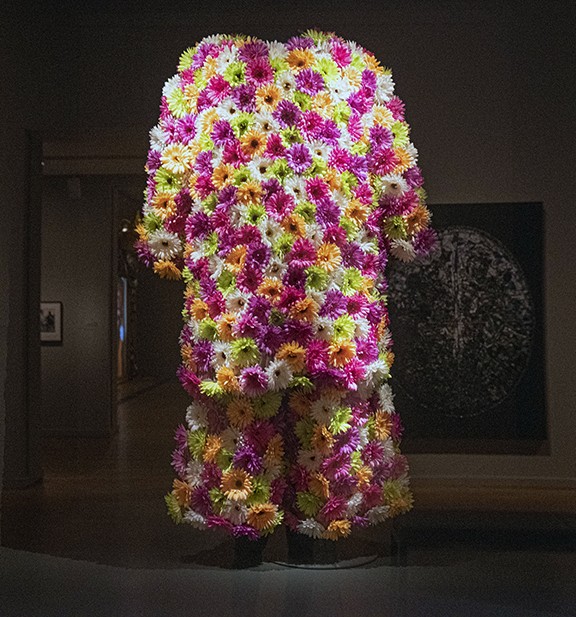 There is simply too much to see in “The Dirty South” in a single viewing.

You should plan to return more than once to give adequate attention to this large and unique exhibition which also includes work from Thornton Dial (Alabama), Janae Hamilton (Kentucky), Kara Walker (raised in Atlanta), painter Romare Bearden (born in North Carolina) and William Edmondson (Tennessee), the first African American folk art sculptor given a show at the Museum of Modern Art in New York. Keen-eyed viewers will spot the contributions of several Virginia-connected artists, including Lynchburg-born sculptor and performance artist Kevin Beasley and veteran rapper, MC, songwriter and producer, Richmond’s own Mad Skillz.

The show is presented by sponsors Altria, the Henry Luce Foundation and the Faberge Ball Endowment and Bank of America. An illustrated catalogue accompanies the exhibition, edited by curator Valerie Cassel Oliver, the museum’s Sydney and Frances Lewis family curator of modern and contemporary art, who recently won the 2018 George Wittenborn Memorial Book Award for the companion catalog to another exhibit she curated, “Howardena Pindell: What Remains to Be Seen.” [Click here for an accompanying interview with Cassel Oliver]. The new “Dirty South” catalog, as well as a specially commissioned companion vinyl LP by Paul Miller, aka DJ Spooky, will be available for purchase in June.

To borrow from W.E.B. Du Bois, “The Dirty South” gives glimpses into the souls of Black folk and is arguably the most compelling, deeply thoughtful show the museum has presented in recent memory. It is a searing sermon, a psalm of high praise to Black artistry and culture. Let the church say amen.

“The Dirty South: Contemporary Art, Material Culture and the Sonic Impulse” is on display at the Virginia Museum of Fine Arts through Sept. 6.  To reserve a visit time and purchase tickets, which are $12 for adults, $10 for youths aged 7-17 and free for museum members, visit vmfa.museum.