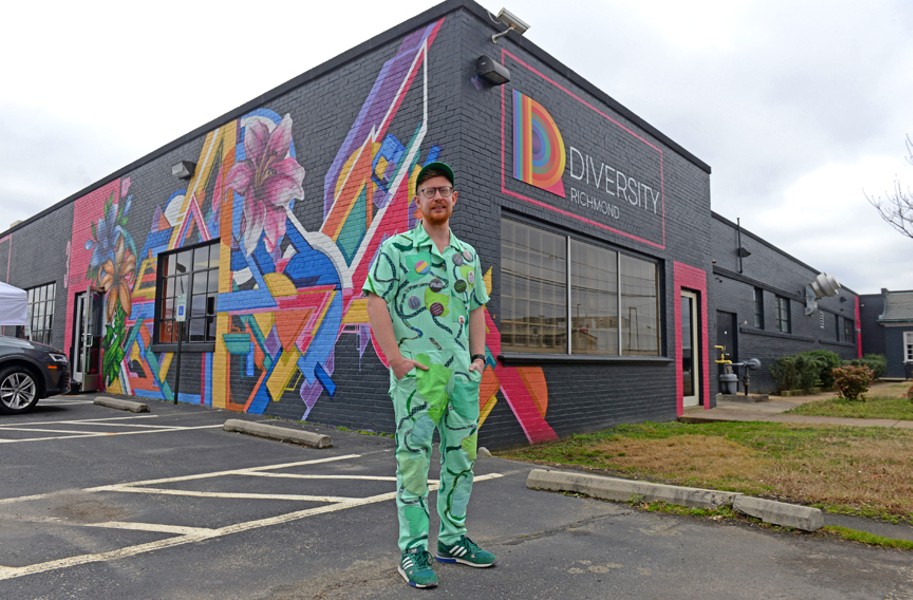 After years of researching plants, Aaron McIntosh saw a metaphor in kudzu. Like the invasive vine, gay people across the South have learned to thrive in inhospitable environments.

At the intersection of quilt-making, storytelling, social practice and archiving sits McIntosh's Invasive Queer Kudzu project. Back in 2013, the fiber professor at Virginia Commonwealth University decided to take on the ultimate Southern weed, fascinated by its history and bad reputation.

After research revealed that kudzu hadn't invaded the U.S. — it was intentionally planted from the 1930s through the 1950s to stabilize roadsides — McIntosh looked for ways to engage his interest in LGBTQ aspects of life in the South with the overgrown vine.

"I work in quilts and I looked at how kudzu blankets entire environments," he explains. "That's when I saw a connection." His response was to create and help others create quilted queer kudzu vines adorned with stories offered by LGBTQ contributors, as well as archive documents that help illuminate queer Southern culture, past, present and future.

At its most basic level, he saw the kudzu vine as a symbol for Southern gay tenacity in the face of homophobic legislation and regional stereotypes.

Using LGBTQ archives in Houston, Kentucky, Baltimore and now central Virginia, he would scan or photograph documents so that he could reshape them to be printed on a felt kudzu leaf, where the words were then traced over in a fabric marker before being quilted.

Not satisfied with only representing the past, he began holding community events where LGBTQ people could fabricate their own leaves by writing their names, how they identify, where they're from and any comments they wanted to make about their self-identification.

"Some leaves have a prompt, like asking what their coming-out story is," McIntosh explains. "It's a way for people to see themselves in the project."

Ahead of his upcoming exhibit at 1708 Gallery, McIntosh has been holding quilting bees at Diversity's Iridian Gallery, with all materials provided. Similar to his booth at Virginia Pride events, the events are places people can come to share their personal stories on a fully stitched and quilted kudzu leaf as part of a bigger statement. Once completed, wires are inserted in the leaves so that they bend naturally.

Like invasive species, he sees gay people across the South like himself thriving in otherwise unwelcoming environments where statehouses, churches and traditional stereotypes often control dominant narratives. "But by sharing our stories and building vibrant community, we invade and overcome the homophobic institutions that otherwise obscure our rich histories."

All of the leaves that have been created, along with those that will made over the next two quilting bees, will become part of his upcoming exhibit at 1708 Gallery, "Invasive Queer Kudzu: Richmond."

Knowing that he wanted to use Monument Avenue in the exhibit, he decided to take on the Jefferson Davis statue because of its central spire and the problematic language inscribed on it. It didn't hurt that the mayor's commission on the monuments had unanimously recommended the Davis monument for removal. But because of restrictions in Virginia's laws governing removal of war memorials, McIntosh knew the monument wouldn't be removed anytime soon. "I'm hoping to precipitate removal," he admits.

A scale model of the monument will be situated in the gallery and covered over entirely with kudzu leaves with stories. The goal is to expedite removal by showing that leaving the destroyed monument in situ to contemplate the legacy of problematic historical monuments and that destruction might be viewed as a critical stage in the life cycle of human history may be a revelation for viewers.

Picnic tables will be scattered around among the ruins with kudzu leaves climbing the walls and cascading down into the gallery. Activist groups have been invited to man the tables to help start conversations about our monuments and their future status.

Until then, McIntosh continues to hold quilting bees throughout March so that even more LGBTQ Virginians can become part of the project.

"My idea of taking on the Jefferson Davis monuments with queer Southern stories is my way of asking who will be our future LGBTQ+ leaders? And who will we build monuments to in the future?" he asks. "I'm championing diversity of culture across the South."