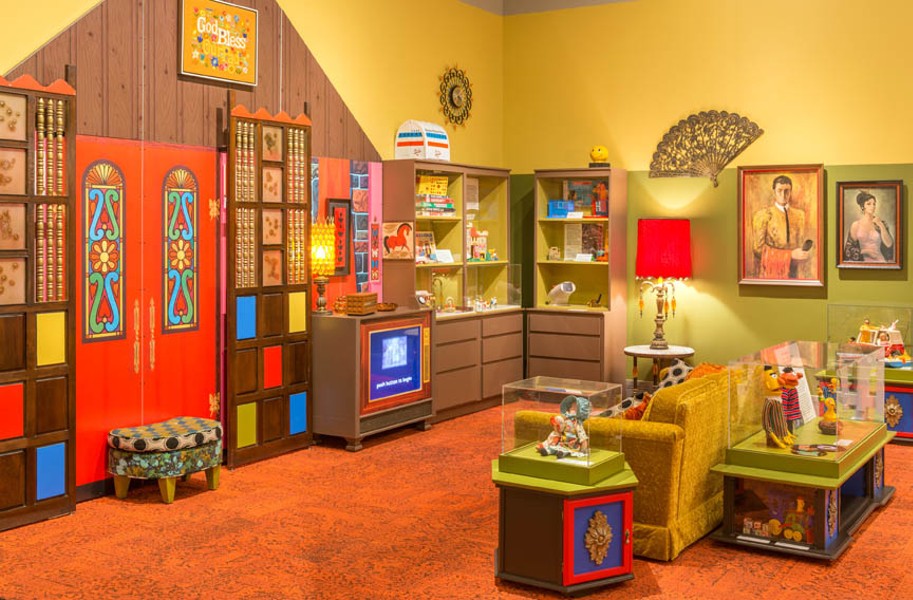 A monster exhibit at the Virginia Historical Society fills 5,000 square feet with 445 toys and games as a way of using nostalgia and memory to highlight historical themes and start conversations.

Quotations from people who invented the toys, children who played with them, adults who purchased them and child-rearing experts who judged them are used as signs to create a scrapbook of 20th-century American childhood touchstones.

“This is such a personal experience for anyone who was there,” she says. “You walk in and see everyone interacting with each other as they explore the exhibit.”

Much of the interaction involves smiling and laughter, as shared memories become the catalyst for strangers reminiscing together. On a Sunday afternoon, the exhibit hums with activity while adult visitors become children again.

Each of the living rooms, including furniture, lighting and the toys in it, contains scores of recognizable details. The ’50s room — with its gold couch with gingham pillows, paneled walls and lamps made to look like cowboy boots with shades depicting cowboys and Indians — gets a group of baby boomers kvetching about how it looks like every basement of their youth.

Three 40-something women spot the oversize vertical playing board of Up 4 It, a giant version of Connect 4. One woman grabs white markers and begins dropping them into the board while another chooses red ones and lets loose. Suddenly a game is on.

As heavy on fun as the exhibit is, visitors learn about the history of favorite toys along the way. Did you know that Twister initially was controversial because many people had a problem with using humans as game pieces? Some called it “sex in a box.” 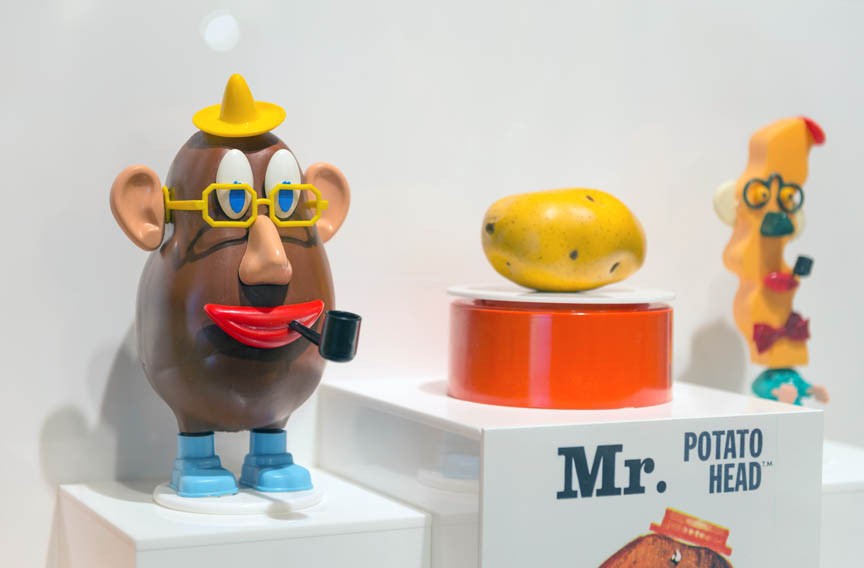 When Mr. Potato Head was originally released in 1952, kids had to supply their own potato. And Alka-Seltzer-fueled rockets eventually were made with protections from kids who couldn’t resist using extra tablets. A ’70s-era environmental test kit came with tests strips that clearly read, “contains lead.”

One visitor spots a chemistry set complete with radioactive materials and crows about the times she used her brother’s set when he didn’t know. Another man shows his son cases of Western-themed toys, saying with pride, “Those plastic horses and cowboys and Indians? I had all those things.” The kid reacts like Dad has shown him an abacus, an example of which is also in the exhibit.

The three highlighted decades are significant because the era saw a huge increase in the number and variety of toys available to American children.

But LeGros notes how toys reflect events in the larger context of culture: evolving changes in family life, gender roles and technology advances. It’s a long way from colored wooden blocks in the 1950s to Baby Brother Tender Love from the 1970s, the first anatomically correct baby doll and available in black or white versions.

The evolution of toys during the 30 years is astonishing, but it’s the unexpected memories that make the exhibit unique.

A woman and her mother walk into the ’70s living room and spy a case with Bert and Ernie hand puppets. “There’s the thing that scared you to death!” the mother says, pointing at Bert. Her daughter recoils in horror, recalling her Dad coming up behind her with the puppet and speaking in Bert’s voice.

Terror is what she recalls, still looking uncomfortable as she moves away quickly. Mom confirms Bert was packed up immediately and given away.

“People have powerfully emotional responses imagining their life as a child,” LeGros says. “These toys are in the museum because they’re part of a larger historical narrative.”