In town filming a movie, how David Arquette conquered RVA.

After a tittering brunette takes another photo with him on the sidewalk, David Arquette rallies a soon-to-be groom from Baltimore and his bachelor-party buddies onward to a strip club. "I love you on Stern!" one male fan gushes.

Some celebrities slip through Richmond in black SUVs, holing up in the Jefferson Hotel, slinking about with sunglasses.

Arquette took the other approach.

By the time a cab dropped him off near the corner of Harrison and West Grace streets Friday night, his Richmond presence was practically de rigueur. If you cared enough, chances are your cell phone carries a photo of you with Arquette's arm across your shoulders.

He flipped it over for me while we waited in a corner of Strange Matter to judge the Air Sex World Championship — more on that later — showing a king of hearts card inked on his right wrist the night before at 212 Tattoo.

Brother to four sibling stars, Arquette grew up on a commune in Winchester. The actor, director, one-time professional wrestler and ex-husband of Courteney Cox was here filming his part as a Union officer in the war drama "Field of Lost Shoes."

Off the set, his march on Richmond included the Metro Richmond Zoo. He posted short videos to his Twitter feed, where he took suggestions of places to visit. He says he met the mayor, declared Alamo as the city's best barbecue, visited Club Rouge gentlemen's club and took a shot of his dinner at Havana '59.

That's when he ended up at Strange Matter, persuaded through Twitter by RVA Beard League officer and 103.7 The River personality Dash, and others, to be a last-minute judge of the Air Sex World Championship stop here. The comedy show, which had a documentary film crew in tow, asks competitors to get creative with an invisible romantic partner, sending the winner to New Orleans.

Arquette is game, he says: "I'm familiar with improv." He offers running commentary with us onstage, laughing and cheering — "I've gotta record this one," he says, pulling out his phone — and throwing back a shot of tequila when all is done.

Out on the sidewalk, where the bachelor party has stumbled upon the "Scream" star, Arquette is center stage, taking a drag from a cigarette and urging the group toward some female-centered entertainment.

Just not Paper Moon, he insists. Why? It's owned by the same people who run the Mansion Room at Fielden's, he says. "I was kicked out of Mansion last night." 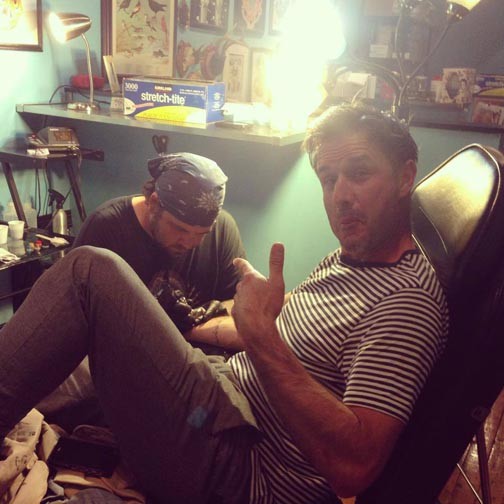 ... and goofs around with the Jefferson Hotel alligator.