A Universe of Possibilities 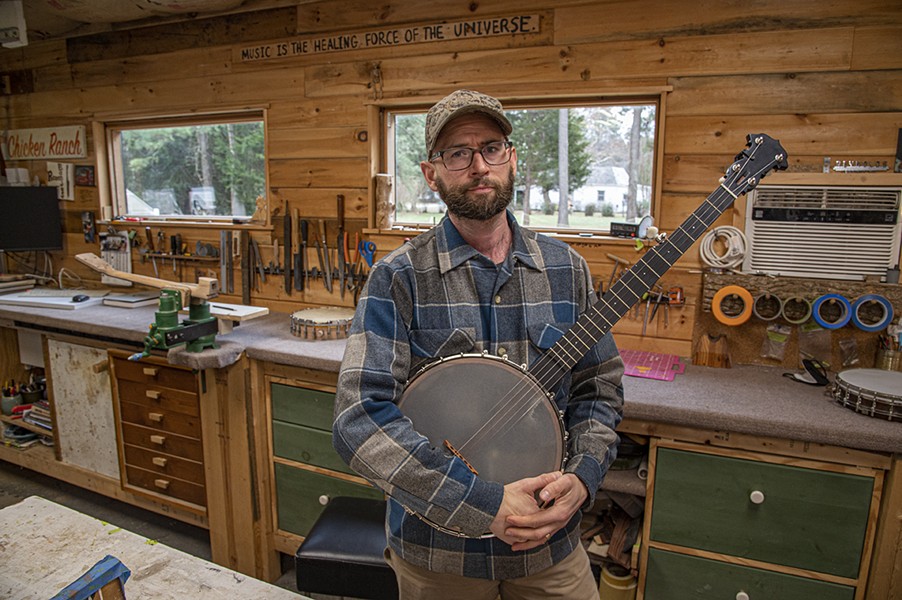 Scott Elmquist Banjo maker J. Tyler Burke holds one of his creations inside his Varina garage. A handmade sign on the wall reads: "Music Is The Healing Force Of The Universe."

There’s handwriting on the wall just inside the side door to the Varina where J. Tyler Burke makes banjos: “Did ya… ask the universe?”

It may seem like an unlikely question to be asked in a space devoted to a solo operation like Burke’s. The self-taught maker produces between five and seven banjos a year under the Renan Banjos banner, and each is an expression of his singular and single-handed mission to apply a visual artist’s training to a medium for which sound is just the beginning.

So what’s with the hand-written cosmic query? It’s one of a few motivational reminders Burke has noted in his workspace, though he says that one helps him the most. It’s about trusting the unknown, and about patience.

Burke’s life has its own cyclical shape. He grew up in Northern Virginia and attended community college there before moving west to study at the School of the Art Institute of Chicago and graduating in 2008. He spent his twenties in Chicago and calls it “the coolest way to grow up on your own.” It’s where he started playing the banjo – a $100 model he picked up after it fell out of favor with the girlfriend he bought it for – and it’s where he subsequently met his wife.

Nevertheless, a slower pace of life was calling Burke’s name, as were the music of Appalachia and cherished childhood memories of visiting his grandmother in Chesterfield, where his mother grew up. Burke and his wife moved to Church Hill in 2011, then to the Varina home they’re in now.

“This house reminds me of my grandmother’s house,” he says. The front yard is taken up entirely by an organic garden, and a chicken coop sits just on the other side of the garage, which he rebuilt to improve the insulation. In between, Burke makes banjos that retail between $1,850 (for his most basic “Booker” open-back model) and upwards of $3,000 for builds that incorporate upgraded materials and labor-intensive ornamentation.

“I use the term hot-rodding,” Burke says of the customization options. “When you’re building a custom car, there’s always little things you can tweak to make it go a little faster or brake a little better. You’re not stuck [with] this one thing.” 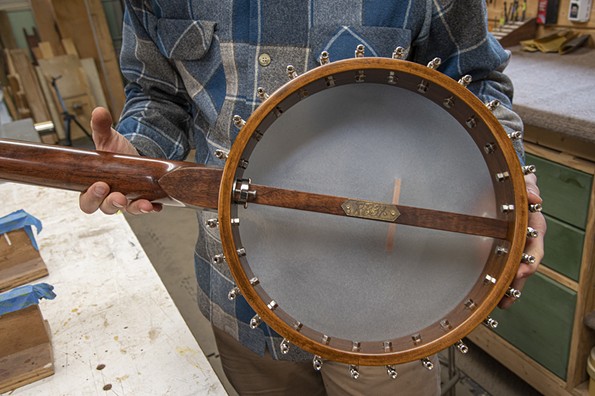 Compared to other acoustic instruments you might hear plucked around a fire pit – a favorite pastime of Burke’s – the banjo is exceptionally versatile. Four- and five-string models are both common, as are banjos with and without the hard-shelled resonator that came into fashion in the early 1900s as a volume-boosting innovation. The neck’s length is variable, as is the skin spanning the front. The closer you look, the more it resembles a canvas.

“I’m trying to bring contemporary art and modern art into the aesthetics of the banjo,” Burke says.

Applying his art education occurred to him early in Renan’s journey, which began in earnest six years ago. A scan of his online gallery reveals stunning variety, both in terms of functional specifications and design elements. A cardinal landed on the headstock of build #29. A skeleton crept onto the fretboard of one of his most recent projects, #32. Jake Blount, the Rhode Island-based winner of the 2020 Steve Martin Banjo Prize, is the owner of #18, a one-of-a-kind model with tessellated camouflage inlay.

“When I first started doing it professionally,” Burke says, “I was using Instagram and Facebook, and I was looking around at all the other builders who were about my age, and they all were doing kind of the same thing. I was like, ‘That’s not me.’”

Burke also goes his own way when it comes to materials. He frequently incorporates reused and recycled wood, including scraps shared by former co-workers from his time working in the mill industry upon his move to Richmond. That work experience was formative; he learned in mill shops many of the tools and techniques that he now uses on a daily basis. But moving past the hobby phase, which followed closely his picking up the banjo in Chicago, required a leap of faith.

“It took a bad job and a bad boss,” he remembers. “I quit. I spent like a month looking for work, and then I was like, ‘You know what? This is your opportunity. You have this house, you have this garage. Let’s try it.’”

Though his is a one-person business, he still had to learn to be a good boss to himself. He’s diligently sculpted his workload over time, ensuring it fits smoothly into his life.

"Im just one person,” he says, “and I realized that really quickly in the beginning. We’re all humans, we all make mistakes and there’s only so much work you can do.”

Building more quickly in batches – making “Chevys and Fords,” as he puts it – would mean competing with bigger operations, and it would conflict with the way of living Tyler and his wife, Candice, have carved out. Tending the garden, working with the chickens, walking the dog at the end of the day, cycling together.

“Lifestyle is everything for us,” he adds.

Renan Banjos gets its name from Renan, Virginia, an unincorporated community east of Smith Mountain Lake. The maternal side of Burke’s family has roots in Renan; his grandparents’ 1890s farmhouse there was another frequent destination for visits when Tyler was growing up. He has memories of snapping green beans on the porch with his grandmother at his side.

“It’s a little crossroads,” Burke says of Renan. “There used to be an old general store with a pot-bellied stove, and they sold ham sandwiches. It was the meeting house. It’s no longer there, but it was when I was a kid.” 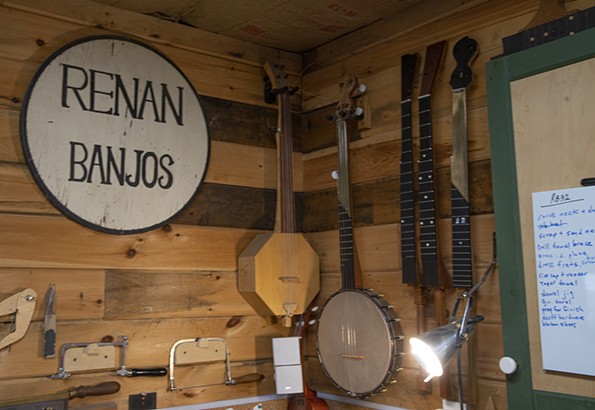 The farmhouse is vanishing in its own way; Burke describes it as “falling apart.” Nevertheless, adopting the Renan name is one way Burke gives his family’s past a foothold in the present. He’s also passionate about spreading the word about the banjo's history.

A section of the Renan website is devoted to the instrument’s origins. “The banjo has a very storied past,” he says. “It came over the during the transatlantic slave trade… I would say in the last 20-25 years, more people that are interested in banjo and banjo history are starting to talk about it a little bit, but there’s still a lot of whitewashing there, too.”

A “to be continued” note follows the series of sobering slavery-related facts on the Renan site’s “Banjo Origins” page, indicating Burke’s desire to continue adding crucial context. Below that note is another: “We can't talk about the Banjo and not talk about racism.”

The same could be said about the genres of music in which banjo figures prominently. Burke is an avid old-time, bluegrass and country listener. The Tennessee-based Roan Mountain Hilltoppers are among his favorites, as are a number of groups with Virginian roots, including Mike Gangloff’s Black Twig Pickers and clawhammer innovator Adam Hurt. Burke’s listening is enriched by an appreciation for the cultural connectivity that made these genres what they are today.

“There’s Native American, African-American, African syncopations and polyrhythms, and then there’s German and Scotch-Irish, especially in this area of the Piedmont and Appalachia in general, that have formulated what we know of old time, country music, bluegrass and blues. And they’re all so interlocked. I hope that going forward in this century that people are changing how we write history. I want to believe that it’s going to get better.”

Burke isn’t just asking the universe. He is, to the degree that one person can from a rebuilt garage in Varina, changing what comes back around.