A Unique Holiday Tradition Lives on in Valentines, Va. 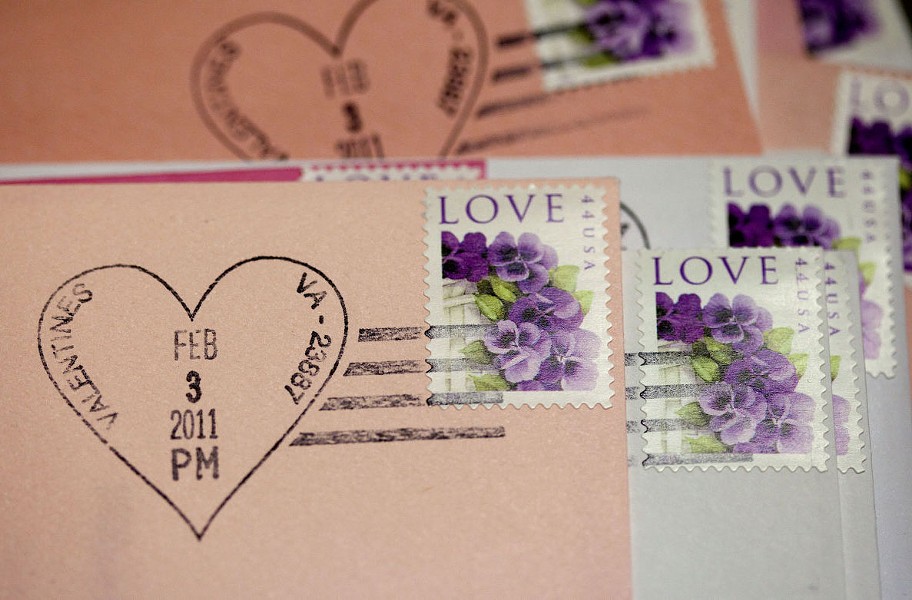 Bill Tiernan Out-of-towners and out-of-staters visit each year to get the community’s unique postmark for their Valentine’s Day mailings.

Perhaps the street lamps are wrapped in pink and red paper. Maybe the local restaurants garnish their plates with little candy hearts that beg "Be Mine." Surely there is a parade and the whole town dresses up like an army of Cupids.

There must be endless kitsch this time of year in a place called Valentines, right?

What else would you imagine from a spot, not far from here, that's known nationwide for sharing a name with – and playing a major role in – the most romantic day of the year?

It's surprising, then, to learn that Virginia's Valentines isn't marked by a road sign. That it isn't even really a town so much as a community within Brunswick County. That the essence of the place is actually smaller still: just one building, one room, one older lady and one younger one offering up their own simple but powerful expressions of love.

If you drive the roughly 100 miles southwest from Norfolk, or 20 miles from Emporia, and take the meandering trek off U.S. 58 onto Va. 627 and finally snake along Barley Road as it turns into Triplet Road before it finally becomes Manning Drive, past countless fields and barns and horses and cows and homes that don't appear to have been tended to in decades, you might be surprised to learn you've arrived.

Assuming you don't drive just a couple of miles too far and end up in North Carolina, you might be surprised, having approached nothing that resembles civilization, when you roll to a stop at the intersection of Western Mill Road and Manning, that this is the place.

The tin roof over whitewashed wood slats forms what could easily pass for a one-room schoolhouse from another time. Step inside and you're taken back to that era.

Ask the woman behind the counter, the one selling hunks of sharp cheddar cheese from a 23-pound wheel and glass-bottle Coca-Colas from an antique soda box, what else there is to see in Valentines.

"This," says Frances Wright in the voice of a southern-fried fairy godmother, waving her hand like a wand from one wall of her store to the other, "is the town." 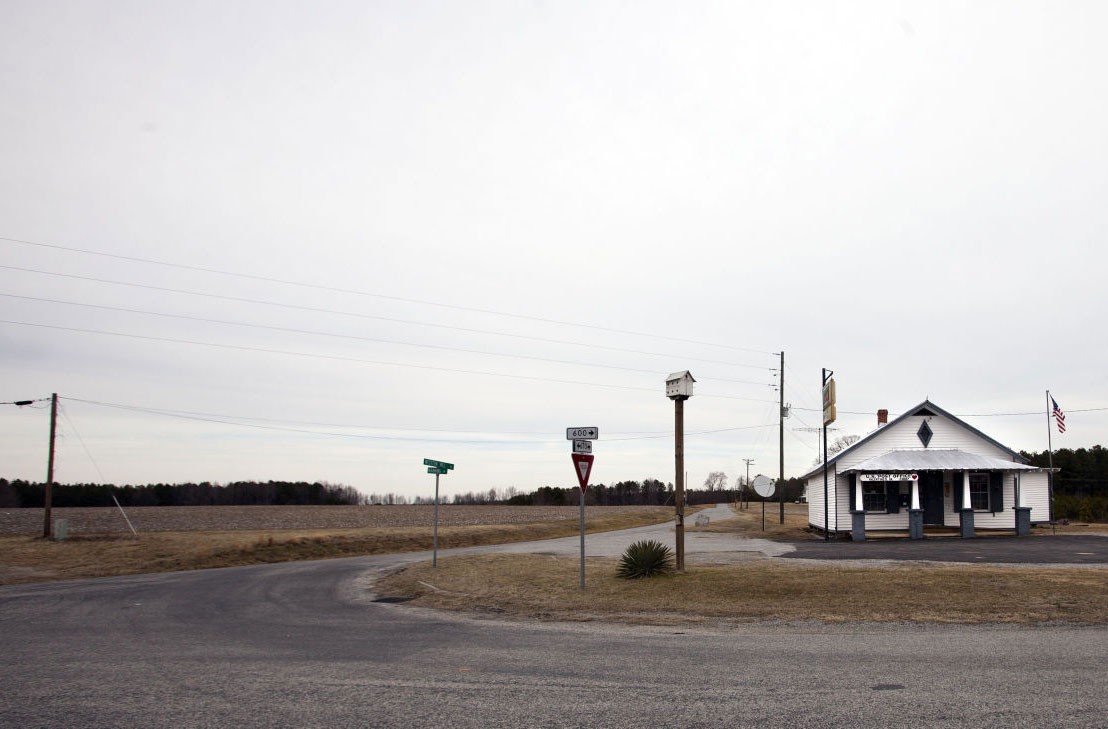 There is a printing shop and an auto garage down one of the other nearby country roads, but that's about it. No hotels, no motels, no restaurants.

The only thing that makes this anything more than a collection of houses and farms is the time capsule of a gathering place called Wright's General Merchandise.

Townspeople stop by to grab a snack or just to sit in one of the rocking chairs around the old stove and talk about the weather, the church gossip, the grandkids. They come to send their mail from Valentines Post Office, tucked in a front corner of the store.

Starting in late January and continuing until the big holiday, about 1,000 strangers each year also trickle into town – or at least this building – to participate in the one special Valentine's Day tradition here: getting envelopes hand-canceled with a black, heart-shaped postmark .

The general store and post office have shared this space since 1935. The post office dates back to William H. Valentine, the town's namesake who served as the first postmaster from 1887 to 1911.

Frances' husband, William R. Wright – known to the locals as "Mr. Willie" – started work at the current store in 1947 before heading off to military service. When he came home four years later, he bought the store and became postmaster.

Soon after, he unknowingly launched what would become a holiday sensation. 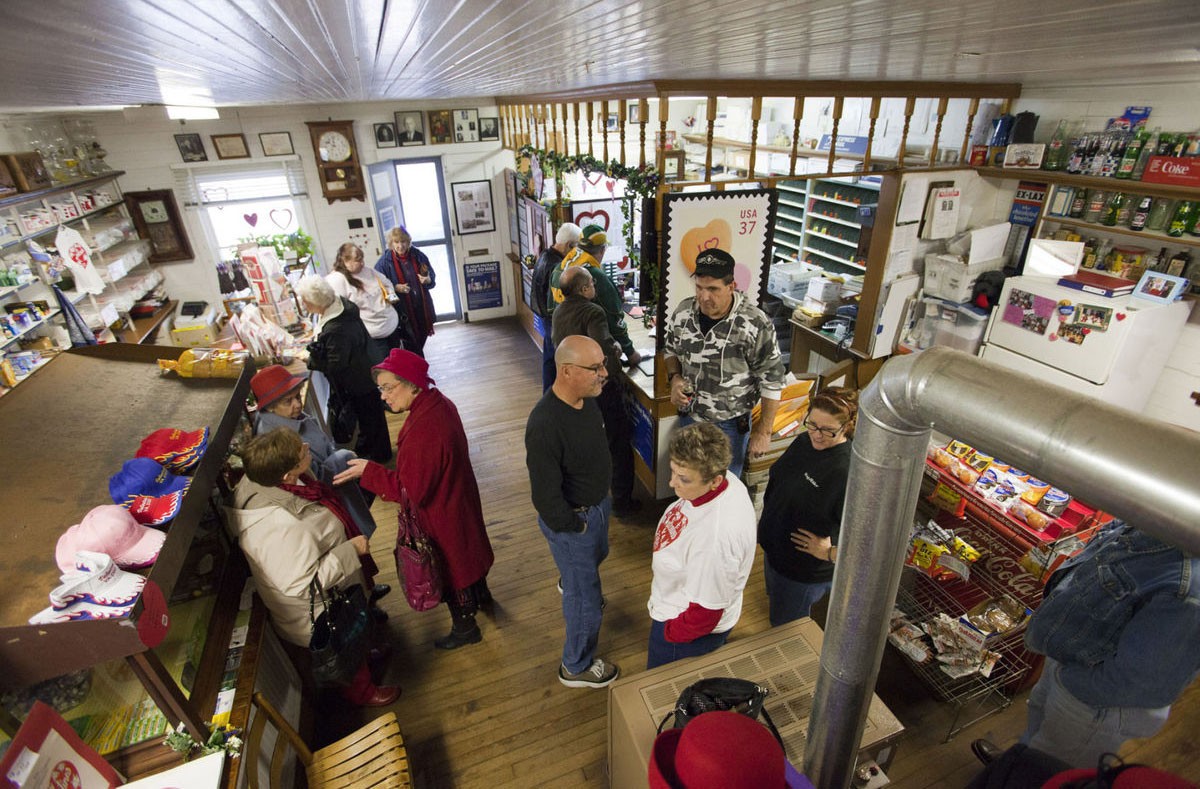 Embracing the quirk of his town's name, Wright began rubber-stamping the mail this time of year with an emblem – featuring a heart and dogwood blossoms – he designed himself.

Word spread, and people started traveling from all corners of the state, as well as North Carolina, Maryland and Washington, D.C., to get the special treatment for their Valentine cards.

Before long, bins of mail from all over the country started showing up at the tiny post office. People sent larger envelopes filled with smaller ones, already addressed and stamped, requesting that Wright put his hearts on them and send them back out.

"When the news media picked it up, that's when it really started blowing up," Frances said. "The first year we had a big to-do; some women's magazine had a big write-up on us, and it just started pouring in."

Since the 1980s, tens of thousands of cards and letters have flooded the post office each February. One season, when a post office in West Virginia closed and Wright was asked to pick up the load, he and his family processed 98,000 envelopes in just a few weeks.

"We worked around the clock, morning and night," Frances said. "Our whole family helped. It has always been a real labor of love for us." 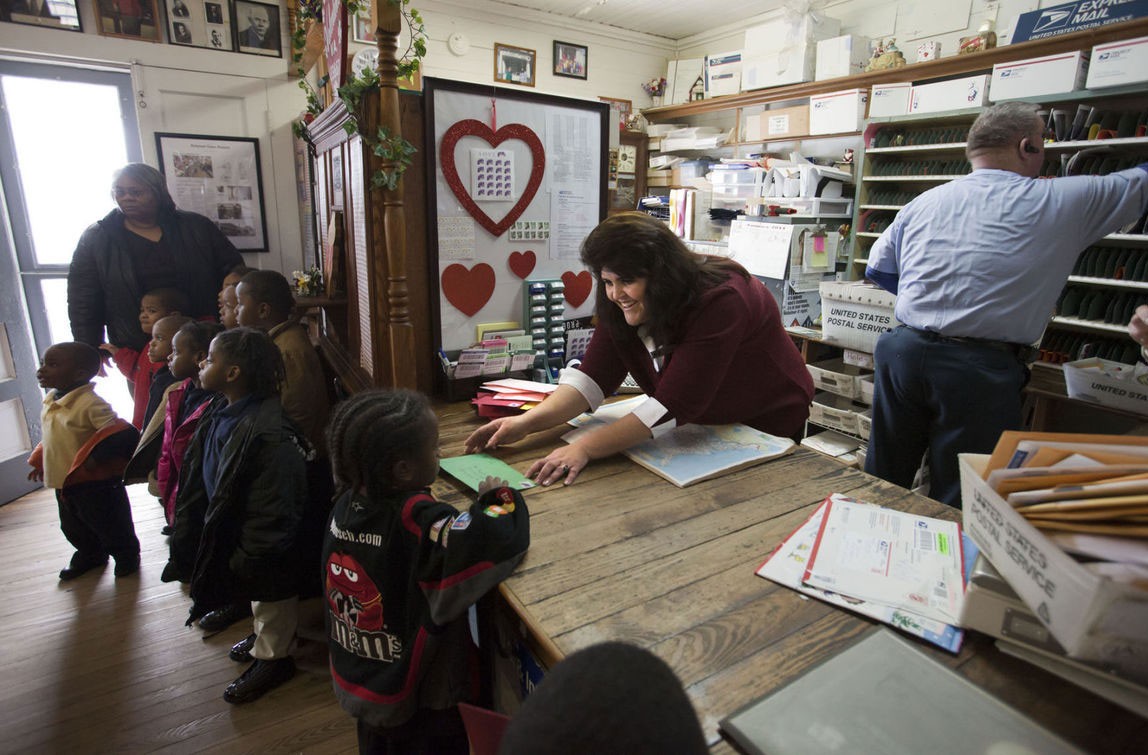 Kathy Fajna felt that love as a child. An aspiring 11-year-old stamp collector, she'd come to visit Wright, and he would stop whatever he was doing to show her the latest goods.

The larger post office in her hometown of Emporia had blown her off when she showed up with only a few cents' worth of allowance to spend.

But Mr. Willie took the time to indulge the child's hobby, and it became so much more than that.

Kathy grew up to become a postal worker herself and dreamed of taking over the Valentines Post Office. Then the chance came.

In 2006, Wright lay on his death bed, worrying about who would get the position and whether that person would carry on his beloved Valentine's Day tradition.

A few days before he passed away, Kathy called the Wrights' house, and Frances held the phone to her husband's ear. Kathy had good news: she had gotten the job.

"It just looked like he was so relieved," Frances said. "His face changed. He was fighting to live to find out who got this post office, and once he knew everything was going to be all right with Kathy in there, he could go.

"We love her so much for that."

Today, the 37-year-old Kathy hand-stamps all the holiday mail with hearts. Her lightest load in five Valentine's Days has been 17,000 pieces; her heaviest was 25,000 – this from a post office that serves about 360 customers during most of the year.

Frances, 77, still runs the general store, accepting only cash or checks for items such as plastic combs, shaving cream, canned goods and candy.

"We used to sell just about everything," she said, "but these days people go other places to get their groceries. Now we mostly sell what you forgot."

Folks don't come, though, for the selection.

"People come in here to step back in time," Kathy said. "Just about everyone can walk in and see or hear something that reminds them of when they were a kid." 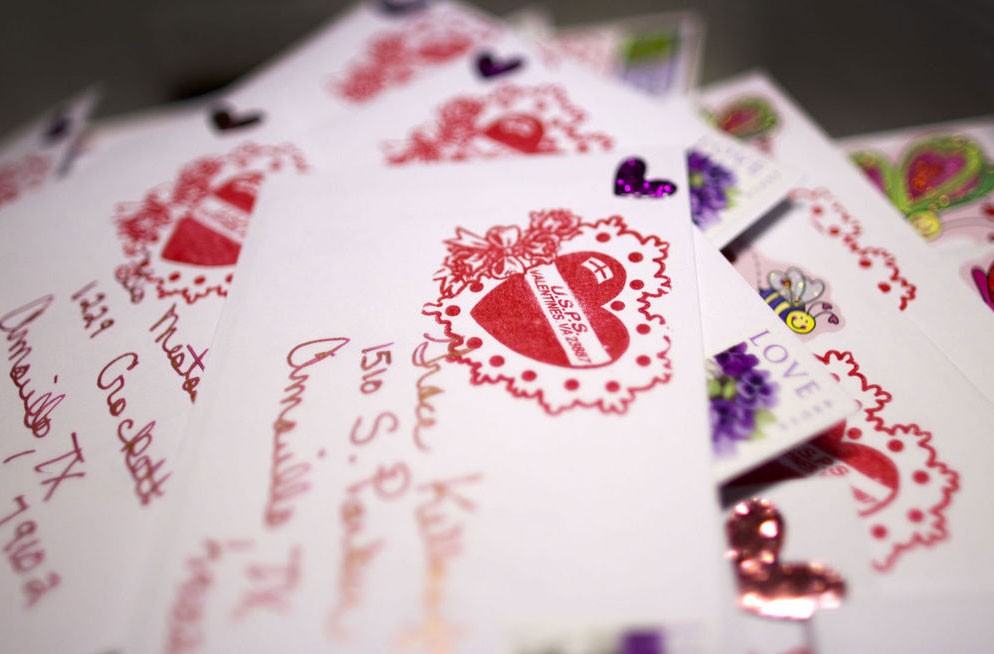 Watching Kathy press the hearts onto each envelope by hand – last year, she lost feeling in one of her pinkies for six weeks because of a pinched nerve – and listening as she carries on long, meandering conversations with one customer while others wait patiently takes you back to the days when we weren't all in such a hurry.

Joanne Morgan drove an hour last week from Clarksville to visit Kathy and Frances at this place she'd read about a few years back in a magazine about rural living. She brought a friend and her 89-year-old mother, who has Alzheimer's.

"We thought it would be a fun adventure for Mom, so we took the scenic route," Morgan said, as if there were any other kind of path to Valentines.

"This is a simple place, a happy place," Morgan said. "Seeing those two old men sitting in the rocking chairs by the pot-belly stove is about as old-time as you can get. I could just envision my dad and granddad being there and doing that. Maybe Mom could, too."

While Frances slices the cheese in the back of the store, one man across the counter chats her up about a long-ago trip to Hawaii. He pronounces it "Ha-why-ya."

His old friend, sitting in a nearby rocker, says it the same way and points out, "I got a free trip to Ha-why-ya about 50 years ago – on my way to Jap-pan."

That conjures a memory for Frances. "Did you know that in Ha-why-ya, they eat Spam like it's steak?"

Hawaiians, then, would like this store because it has a healthy stock of Spam on the shelves, along with Mr. Willie's old collection of soda bottles.

There's a green container of Kickapoo Joy Juice, a forerunner of Mountain Dew produced in the 1960s. There's also a Mason jar dated 1858.

More recent additions include a book Wright wrote about the town's history. It's 135 pages, pounded out on an old typewriter and photocopied from his journal. Frances sells it for $20.95.

It contains charts of the town's yearly rainfall, a list of families living here in 1997 and recipes for coconut candy, fruitcake and grape wine.

In the book, Wright opines: "Do we still need country post offices? Yes, if rural people are to receive the same benefits as people in towns and cities." 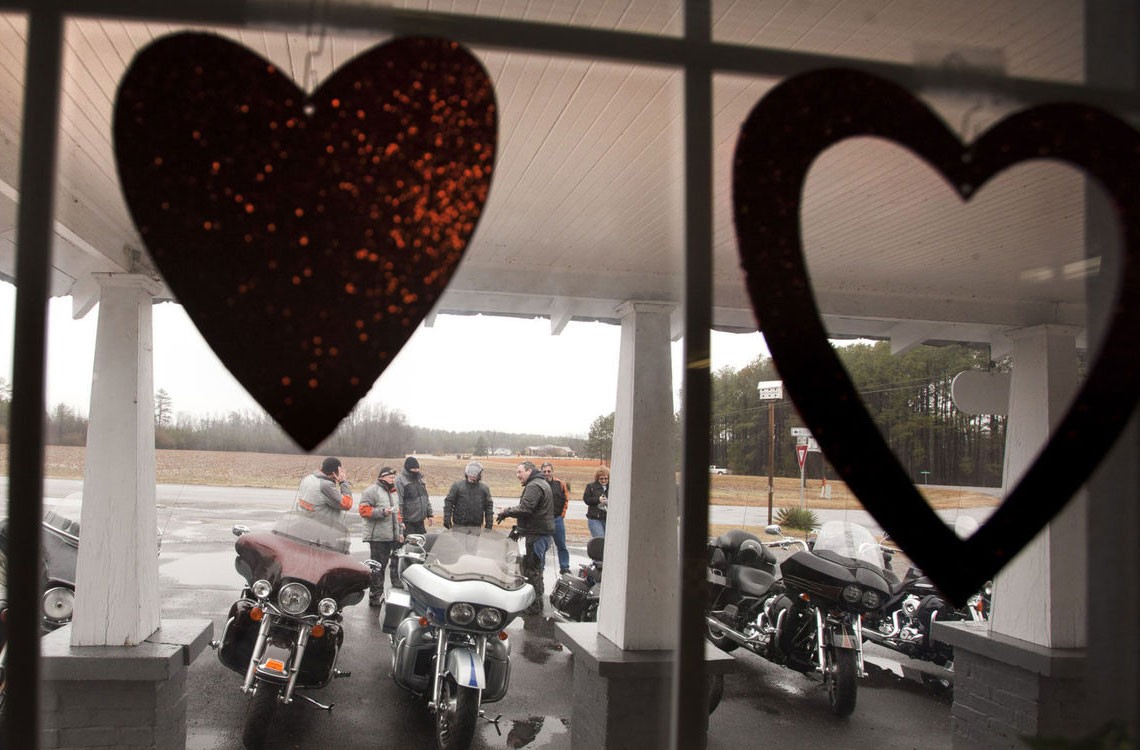 Frances and Kathy keep that spirit of service alive today, putting together goodie bags for busloads of schoolchildren who visit and making hot chocolate for motorcycle clubs who ride up from Nags Head and Kitty Hawk in the days before Valentine's.

They work well past their advertised hours to make sure the cards, which this year have come from as far away as California, Canada and France, get those signature stamps.

No, there is no parade in Valentines on Valentine's Day. There is, in fact, no official celebration at all.

"Our celebration is to be quiet," Frances said.

"It's a sigh of relief, the first time we can breathe in weeks," Kathy said. "Unless we have a wedding."

The post office has been the site of 15 Valentine's Day weddings. The last time was three years ago, when Kathy prepared cake and cookies and punch for a couple who had called and asked to have their ceremony there.

Later that day, a second couple showed up unannounced, expecting to be married right about the time Kathy was closing up shop.

"Of course, we made room for them," she said. "And it was a lovely ceremony."

What else would you expect from a town that shares its name with the most romantic holiday of the year?

This story originally appeared in 2011 on PilotOnline.com.