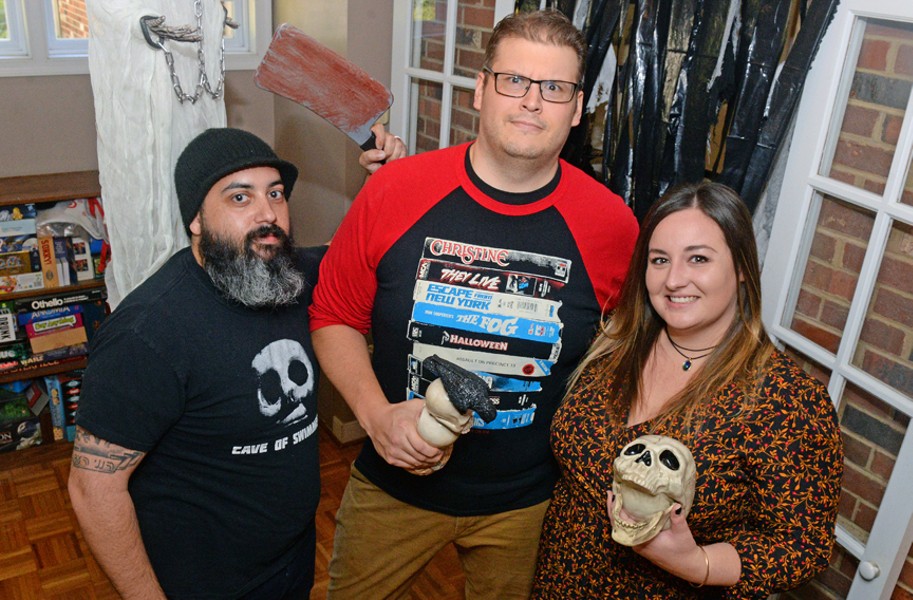 Scott Elmquist Friends Sam Berson, Palmer Sturman and Alex Voyame conceived the weekly podcast about horror films, Terror InPodnito, out of sheer love for the genre. It can be found at their website, terrorinpodnito.com.

For each horror aficionado, the introduction story is different.

As a child, Palmer Sturman had night terrors. It was seeing classic horror film "A Nightmare on Elm Street" very young that taught him that he was empowered to fight back and face his fears, even in dreams. As he grew out of the terrors, a horror fan was born.

Lax parents who didn't care what videos she rented, combined with a kid's interest in all things weird and macabre, shaped Alex Voyame's craving for the feeling she got in the pit of her stomach when watching a genuinely scary movie and the rush that followed.

Sam Berson had older sisters who loved to scare him any way they could, including playing horror movies to spook their young sibling. These days, anything creepy gets him going and reminds him of growing up being tormented by those closest to him.

These three transplants to Richmond, all major horror fans, have been good friends for years. After a few months of bouncing around funny ideas for podcasts, Sturman and Voyame got caught up in a beer-fueled discussion about horror flicks they found funny. With a desire to do a podcast about horror films, they conceived of Terror InPodnito, a weekly event that started with the two of them and, over the course of several months, added Berson.

After a few episodes with all three on board, they changed the format and continued to tinker with it until it became what it is now.

"As a fan of horror movies, as well as enjoying arguing with my friends, it was originally something that we did just to hang out with each other and talk about something we love," Berson recalls. "But as we've started to get more feedback from others like us, we've taken the cast past what I think any of us expected."

Terror InPodnito aims to cover the entirety of the horror pop-culture zeitgeist via three distinct segments. The Horror Headlines look at some of the highest trending news in horror for the week, while Now Slaying is a discussion of new releases and the Main Event focuses on the featured movie, show, book or game for the week.

"Ultimately, I think our goal is just to continue to meet people in the horror community, keep talking and keep learning about the genre we love with people who are just as passionate as we are," Sturman says.

Berson points to the opportunities they've had to meet some of their idols as well as some of Richmond's most passionate horror fans as enough for him. "Add in the time spent recording a bunch of content with friends and I think we've already passed my initial goals."

Having three people with varying taste in horror films allows for a lot of diversity in content. Each month a theme is assigned and the podcasts reflect it. In March, in honor of Women's History Month, they chose films featuring women in powerful roles. September was dubbed Satanic Panic and focused on movies pertaining to demons and the devil. A Giallo theme explored Italian horror. They've included Christmas themes for December, summertime slaughter for August and for October a focus on horror films that took place on or around Halloween.

Over time, the preparation for recording has increased to the point that all three admit spending 10-20 hours a week scripting sequences, segmenting parts of the show, creating sound effects and working on audio quality. And that's before editing and scheduling.

As they got further into production, it became apparent that the episodes their listeners favored most were the long, in-depth, analytical episodes. "Since then, we've made a conscious effort to put the time into researching and evaluating whatever movie we're covering that week, to ensure that we're delivering the type of robust content people tune in to hear," Voyame says.

Because there's such an extensive amount of content to discuss — and more being created daily — the Terror InPodnito creators see no shortage of material at least for the next 30 years.

But what is the real appeal of horror for these fans? For Sturman, it's that for a set amount of time you're allowing yourself to be uncomfortable, experiencing the unexpected.

"There's something amazing about controlled terror, letting loose enough to be able to feel scared or thrilled," he insists. "But knowing that you can turn it off at any given point, that it's not something you're trapped in."

That horror can be such an immersive experience suits Voyame.

"For a few hours you're able to escape all the banal, tedious stuff that comes with being an adult and have fun being scared instead. It's a very liberating experience to embrace fear."

"I don't think a lot people realize or appreciate that there are so many different forms within the genre," Berson explains. "I can watch three different movies and run the emotional gamut of joy, terror, love, fear and so much more." S

Visit and listen to the podcast at Terrorinpodnito.com.