A Tribute to Harry Dean

A highlight of this year’s festival, “Lucky” is a heartfelt swan song for one of Hollywood’s greatest character actors.

Stefania Rosini/Magnolia Pictures Veteran actor Harry Dean Stanton wanders down a strange alley in “Lucky,” a movie he finished a year before he died at 91. Production designer for the film and Richmond native Almitra Corey will attend the screening at the Byrd on Saturday, March 17, at 4 p.m.

There are plenty of reasons why most Hollywood films choose not to stare, unblinking, at our mortality.

Most people go to the movies to escape reality. And our fickle, youth-obsessed culture, shaped by advertising and the logic of demographic marketing, isn't trying to ponder becoming obsolete, much less the darkness that never ends.

I'm not talking about anything as trivial as a midlife crisis. But real, gaunt, hollowed-out age, the kind that looks like death staring you in the face. Or like Harry Dean Stanton's deeply human, 90-year-old face in "Lucky."

One of America's great character actors, Stanton held the big screen with effortless cool for more than six decades and some 200 films. His was a presence not defined by sex appeal, sharp wit or mysterious detachment, though he had those things, but rather the haggard nobility of the everyman. His calling card was authenticity. Or as playwright and actor Sam Shepherd once said, "His face is the story."

After roles in movies as varied as "Cool Hand Luke," "Wise Blood," "Alien," "Paris, Texas," "Repo Man" and "The Straight Story," Stanton ended on a high note by starring in "Lucky," a moving dramedy based loosely on his life. Lovingly created for him by screenwriters Logan Sparks and Drago Sumonja, it was shot on film by actor and director John C. Lynch using vintage anamorphic lenses, some of which had been used on old Stanton films.

The story is about a cantankerous, chain-smoking atheist named Lucky, not unlike Harry Dean himself, who lives alone in the desert and suffers a fall. But it's really about how rare it is to face the very end of life with grace, still choosing to live in the moment -- to accept the inevitable curtain call with a broken but beatific smile.

"I guess I'm most proud of having gotten the spirit and tone right in the film," director Lynch says. "It is a film about mortality and yet it needed to be filled with a clear-eyed humor and humanity. We got that just right, I think."

The movie features memorable supporting performances by Stanton's real-life friends including David Lynch as Howard, a man who's lost his pet tortoise, Tom Skerritt as a haunted Marine vet, and Ed Begley Jr. as a doctor who cautions Lucky, "I'd tell you to quit smoking, but at this point it would do you more harm than good."


Everyone involved brought their A-games, including a couple of hard-working Richmond natives who helped craft a poignant send-off to a Hollywood legend — this little jewel of a film whose stature is only likely to grow.

Almitra Corey, who was raised in Bon Air and graduated from Virginia Commonwealth University's sculpture and extended media program, worked as production designer on "Lucky," which was shot just outside Los Angeles. Her warm, richly detailed sets help evoke the hardscrabble but cozy, small-town vibe.

Corey is a model for Richmond success in Hollywood. In the past decade, the 38-year-old has hustled her way through the ranks and is now an expert at creating immersive worlds on a limited budget, whether getting creative on set, shopping on Etsy for vintage items, or finding the right industry folks to build them.

"Her work was fantastic," Lynch says by email. "There is no way you would believe what some of those places looked like and how she made them look." 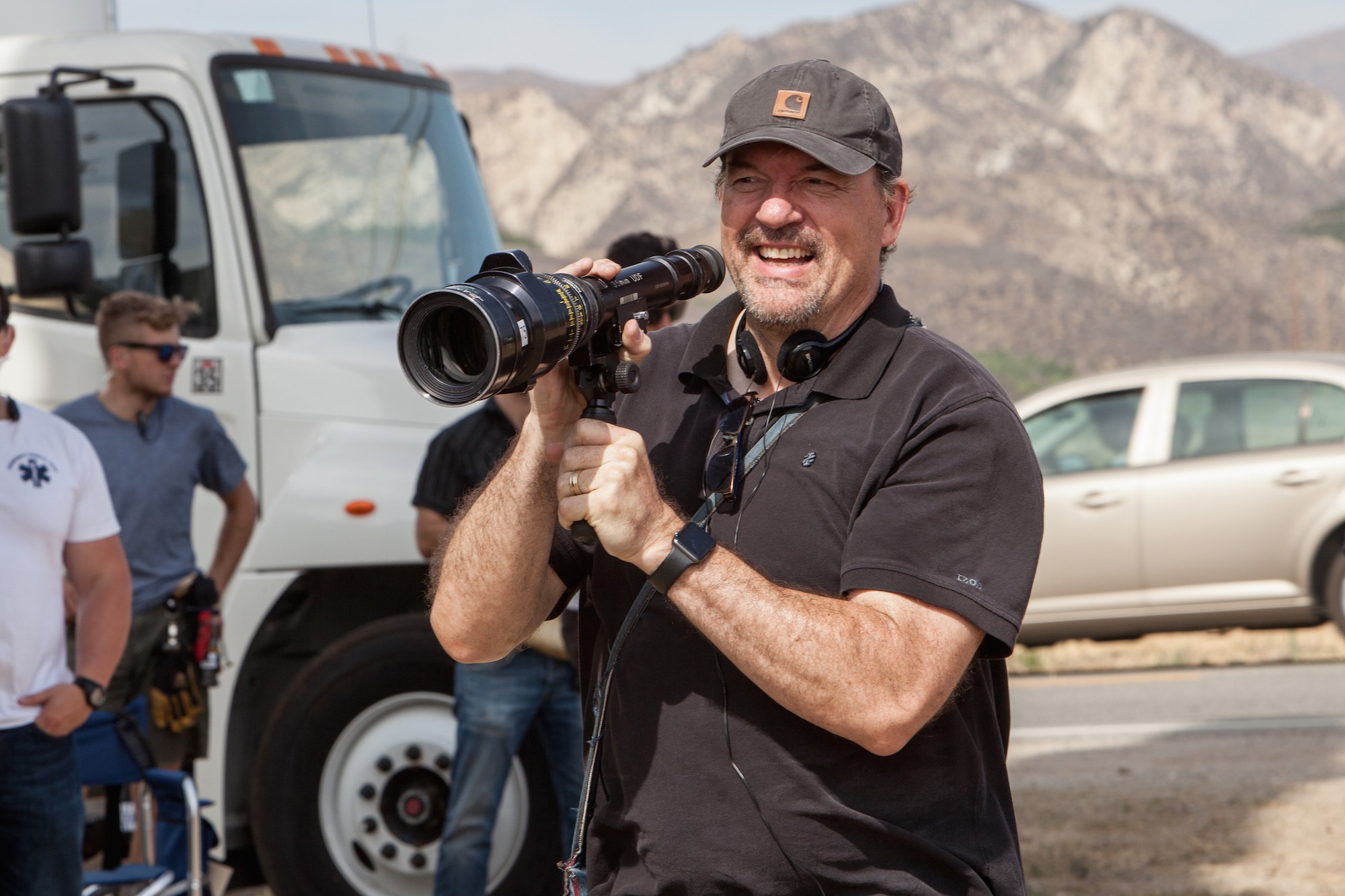 It's easy to see why Corey is always taking meetings with interesting directors in New York and California: She comes across as warm, friendly, and passionate about her work. You can spot her handiwork on television (first season of HBO's "High Maintenance") and films as varied as Kelly Reichardt's "Night Moves," Harmony Korrine's "Spring Breakers," and Karyn Kusama's dinner-horror thriller "The Invitation."

All were great experiences, she says, but "Lucky" was special.

"In America, people are scared of death and don't often accept that it's a part of life. I love that we show that," she says. "Harry was definitely playing a version of himself. One that was very close, I think."

During pre-production, Corey got to hang out at Stanton's real home doing research for his character's house. "I decorated it in a similar way. He had a lot of photos and Eastern objects, he was really into studying religions." In a personal touch, she added her own family photos to the set, placing them alongside photos from Stanton's youth. "I'm excited for my mom to see an old photo of herself in there," she says, laughing. "Like maybe she was one of Harry's long lost loves."

Family photos weren't her only nod to her hometown: She also was able to hook up another Richmond-based friend, Joseph McCorkle, with a props job on the movie. He was a huge fan of Lynch and Stanton's, she says, and happily obliged.

"I can only imagine being a 90-year-old person working 10 hours plus a day, but he endured," McCorkle says about Stanton. "From reuniting with fellow Nostromo crew member, Tom Skerritt, to seeing him smoking cigarettes and laughing with David Lynch between takes is still very surreal. I guess that's the point of Harry's philosophy and attitude towards life. To be present in the moment."

Stanton was friendly with everyone on set, Corey says. In between takes, the actor had an endearing habit of telling all the crewmembers the real meanings behind their names, she recalls.

When shooting one of the more memorable scenes in the film, a birthday party for a young Hispanic boy, Corey saw Stanton sitting alone at a picnic table, smoking his usual American Spirits and eating watermelon. The only problem was the watermelon was set dressing and had been sitting in the heat forever.

The prop master went over to give him fresh slices — he was the star of the movie, after all, first on the call sheet.

James River Film Fest co-founder Mike Jones recalls meeting Stanton, who often identified more as a singer than an actor, during a 1980s concert at Rockitz in Richmond when Stanton was performing with the band the Call.


Unsurprisingly, he was smoking at the bar, wearing cowboy boots, and Jones went up to tell him how much he loved his work. "I asked him what his favorite performance was. He said his favorite was whatever one he had the most lines in," Jones recalls. "Then he leans over and asked if it would be all right to kiss my girlfriend. So I said, ask her. She said sure, he kissed her and then turned red as a beet."

Although Stanton is legendary from his partying days with old pals like Jack Nicholson, it's the consistent performances that people will remember. And there are many scenes in "Lucky" to cherish: Just watching Stanton silently kicking a can down the road seems worth more than most actors' careers.

"Harry's simple presence was so powerful. As we cut the film, I found that coming clearer and clearer," explains John C. Lynch, a character actor who played Norm Gunderson in "Fargo" and the potential Zodiac killer in David Fincher's "Zodiac." "It is something I will endeavor to grow to in my work. Letting presence work more for me."

The movie has a lovely soundtrack featuring Will Oldham with Johnny Cash ("I See a Darkness"), a closing song by onetime Richmond resident and folk legend, Michael Hurley ("I Stole the Right to Live") and best of all, Stanton's impromptu ballad sung in Spanish ("Volver Volver" or "To Return, Return").

Lynch admits he was disappointed that Stanton wasn't nominated for another Academy Award for best actor. "But five slots is so few. And the competition so fierce and desire and intention of large entities so great to get them, it's a crap shoot for any great performance," he says. "And his is great, in my biased opinion."

Stanton died just six months after the release of "Lucky," never having seen a final cut of the film, Lynch says. He wanted to see it on the big screen, but was too sick to attend the Hollywood premiere. However, the actor did send a special message to everyone in attendance: "You're all nothing," it read.

In the movie, the actor delivers his final scenes with a poise and grace that's almost unbearable. He seems to have left the plane of acting and is revealing something deeper for future audiences, what Lucky might call his "nothingness."

"When we were shooting the last scene in the desert and he looked into the lens," Lynch recalls. "That choked me up. I could barely say 'cut.'"

As part of a tribute to Harry Dean Stanton, "Lucky" will screen at the Byrd at 4 p.m. on Saturday, March 17, ($8 admission) with guest Altamira Corey. Also "Repo Man" will screen at midnight at the Byrd, sponsored by Movie Club in memory of the Video Fan. $8.