A Tiny Urban Oasis: Parklets May Be Coming to Richmond

Plans for tiny new public parks are bubbling up across Richmond.

Parklets, as they're called, replace parking spaces — or in this case, bus stops — with strips of pedestrian space that offer benches and scraps of grass where there once was asphalt. They first appeared in San Francisco and spread to cities such as Philadelphia and Chicago. 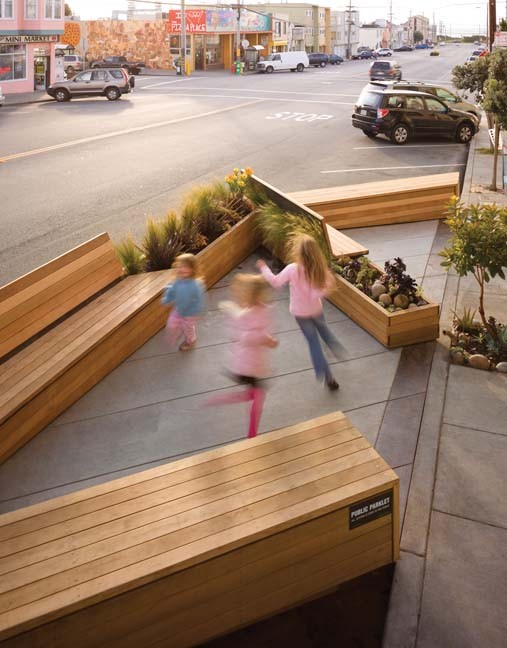 "The idea is to improve a streetscape and provide spaces for neighborhood residents to congregate," says Emily Smith, a designer at 3north. "The street becomes a nice place to be, not just a way to get to the businesses."

The design firm is behind the proposal of two parklets for Robinson Street in the Fan. The city's planning director, Mark Olinger, says he's also aware of plans for at least one other parklet in Scott's Addition.

Olinger says the designs look good, but nothing like this has been proposed in Richmond, so the city is trying to figure out the permitting process.

Bob Adams of the Robinson Street Association hopes to bring parklets to Richmond by the end of the year. One would be built near Buddy's and Starbucks and the other one outside Acacia Mid-Town.

Adams says the association has worked with GRTC Transit System to retire a handful of obsolete bus stops that would make way for the parklets. That way, no parking spaces will be eliminated — a perennial concern in the Fan.

The cost of construction and maintenance of the parks will be the responsibility of the neighborhood association and nearby businesses. Adams says the association hopes to raise $10,000 from a Kickstarter campaign that starts this week and another $10,000 from other donors.

The cost is small compared with the impact the projects will have on the streetscape, he says: "This is a really unique way to add to the urban experience on the street and the enjoyment of the street."