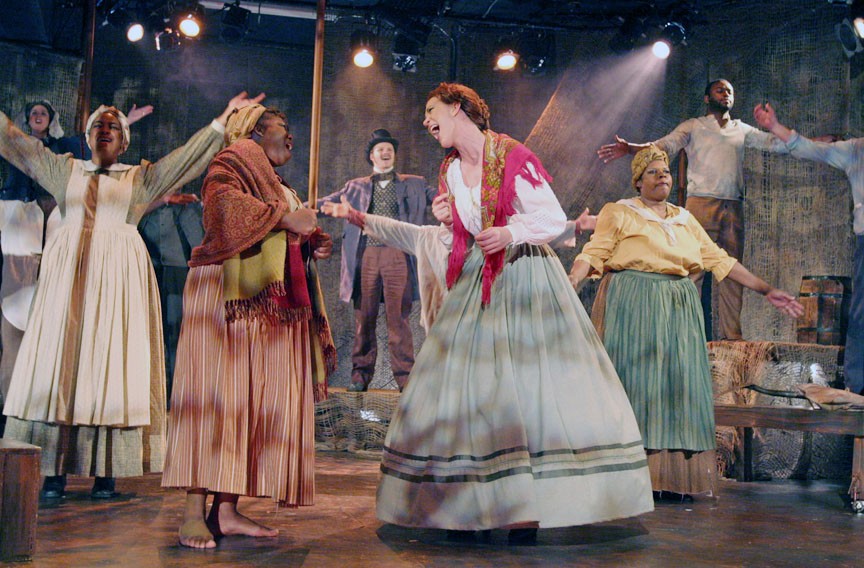 Lyricist Lynn Ahrens and composer Stephen Flaherty have collaborated on some of the most crowd-pleasing musicals of the modern age. But there are reasons that "Dessa Rose," playing at Firehouse Theater, isn't one of the more popular titles in the Ahrens-Flaherty canon. The show falls short of the grand, historical sweep of "Ragtime," lacks the jaunty musical kick of "Once on This Island" and seems downright dour when compared to oft-produced hit, "Seussical," finishing a run at Theatre IV.

But the Firehouse does everything it can to lift the source material to a higher level. With Richmond CenterStage's executive director Richard Parison Jr. at the helm, this story of an unlikely friendship that develops between a young runaway slave and a lonely white woman in the antebellum South gets a lush and showy staging. Scenic designer Todd Edward Ivins expertly uses every square inch available with his rustic set, dramatically draped with what looks like hemp netting. Persistent infusions of stage fog evoke a steamy Southern atmosphere. And, most importantly, the cast consists of some of the area's finest voices.

Desiree Roots plays the title character, whose life seems destined for a bad ending when her malevolent owner (Michael Hawke) kills the father of her child (Keydron Dunn). After a series of narrow escapes, Dessa arrives at the plantation of Ruth Sutton (Stacey Cabaj) who's been abandoned by her husband. Initially antagonistic, the two young mothers work together on a risky scheme hatched by worldly Nathan (Durron Marquis Tyre) that promises to gain both of them their freedom.

Many of the songs in "Dessa Rose" don't seem worthy of the tremendous vocal power of performers such as Roots, Cabaj and Tyre. The first-act finale, "Twelve Children," should be Dessa's stirring statement of family pride. But in the context of an exposition-heavy first act, it plays as little more than a list of names. The drama coalesces in the second act, however, culminating in a truly triumphant "White Milk and Red Blood," sung by Katrinah Carol Lewis. It may be a long time coming, but "Dessa Rose" flowers in the end. S

"Dessa Rose" is running at the Firehouse Theatre, 1609 W. Broad St., through June 3. Call 355-2001 or go to firehousetheatre.org for tickets and information.