The Branch Museum of Architecture and Design celebrates the centennial of its home on Monument Avenue with a loan. 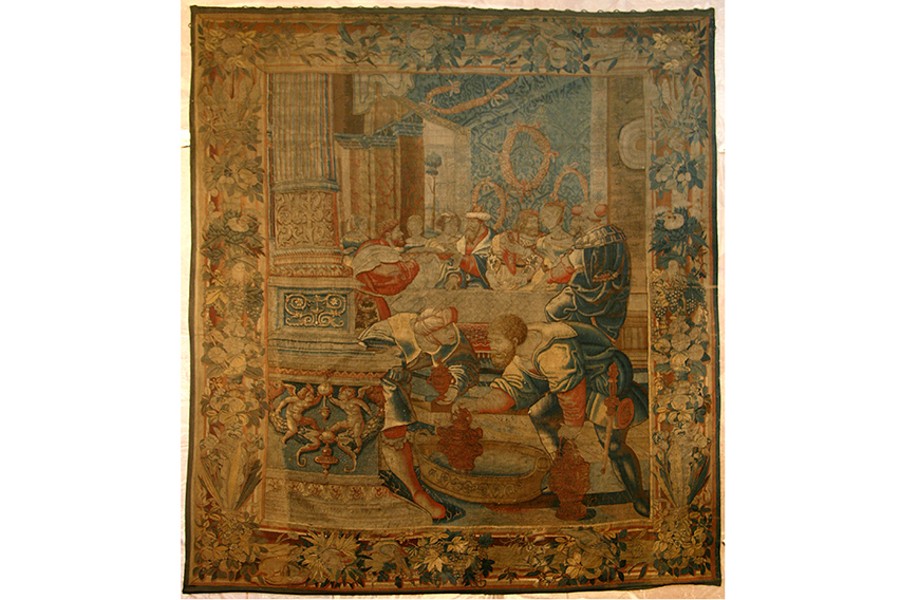 Jacob, the traditional ancestor of the people of Israel, managed to get his brother’s birthright through a double deception. Intent on escaping his brother’s understandable wrath, he meanwhile fell in love with Rachel, but their path to the altar was dramatic and involved a dark tent, one sister substituted for the other as bride and a love triangle.

The soap operalike story was a popular subject for Flemish Renaissance tapestry designs in the 16th century. It was then that Bernard van Orley, considered the most important and influential Flemish artist of his generation, designed an intricately detailed tapestry of “The Marriage of Rachel and Jacob” dating from 1535-1540.

Always in search of Renaissance-era treasures, Virginia-born art collector and financier John Kerr Branch purchased the tapestry in Europe early in the 20th century. Branch went on to build his family a winter holiday house in the Tudor style on Monument Avenue to house the 14-by-10-foot tapestry, along with his ever-growing art collection.

That home is now the Branch Museum of Architecture and Design, which is re-installing “The Marriage of Rachel and Jacob” for the first time this century to coincide with a celebration of the house’s centennial. On loan from Branch’s descendants, the Dotts family, the tapestry will be on display to the public in December. It includes precious gold- and silver-wrapped threads and was commissioned by Holy Roman Emperor Charles V.

Lisa Hutchinson of Top Stitch Mending has been busy reinforcing the rotting thread that holds the 33 rings from which the 100-pound tapestry hangs.

“It’s really exciting,” she says while stretched across a chair, her feet on a stability ball for balance, as she painstakingly works on the rings. “I’m leaving all the old thread there, but you’ll be able to see all my work, too.”

Descendent Walter Dotts, whose late mother Zayde Rennolds Dotts inherited the tapestry, is particularly excited about the re-installation because it represents the principle of decorum, which refers to the appropriate decoration for specific rooms dedicated to a particular use. In this case, an artwork depicting a marriage feast will again hang in the original dining room of the Branch House.

The Branch family spent its first Christmas at the house in December 1919.

“My great-grandparents built the house 100 years ago to house this beautiful work of art and others like it,” Dotts says. “It personalizes the Branch Museum and helps tell the story of who built the house and why.”

The year 1919 was significant in many ways for the family and Americans in general. It marked the end of World War I, the initial passage of the 19th Amendment giving women the right to vote and completion of Branch’s 27,000-square-foot-home in Richmond. By January 1920, Prohibition went into effect and Branch had the house altered to include false walls, hidden storage in an elevator shaft and concealed spaces between floors to house his illegal hooch.

To celebrate the family’s first Christmas in the house 100 years ago, the museum is holding a centennial celebration with the unveiling of the tapestry, vintage decorations, live jazz from the James Joyner Band, lavish fare and holiday spirits courtesy of Cirrus Vodka and Hardwood Park Craft Brewery. The Fan Townhouse and Garden Club has decorated Christmas trees using native white pine — the type likely used by the Branches 100 years ago — and working from a drawing done by Sally Branch of the house decorated for the holidays in order to re-create its appearance as closely as possible for the season.

In keeping with a Branch family tradition, a special tree is decorated with presents for children, some with severe medical conditions, who attend programs at neighboring First Baptist Church. They’ll be invited to a party where they can choose gifts from the tree.

The sense of excitement at celebrating the Branch house’s centennial is palpable among the staff. “This is a big moment for us with the tapestry finally coming home,” says the museum’s executive director, Penny Fletcher. “Part of what the Branches did was introduce their friends to great art. Now we can introduce it to the rest of Richmond.”

The Branch Centennial will be held Thursday, Dec. 19, from 6-9 p.m. at the Branch Museum of Architecture and Design, 2501 Monument Ave. Tickets at branchmuseum.org.