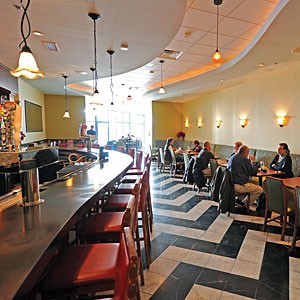 I recently came across an article by Calvin Trillin in an old New Yorker magazine about a Canadian concoction called poutine. It originated in Quebec and sounds temptingly fancy until you hear what it is: a pile of french fries covered in cheese curds and brown gravy.

Setting aside the heart-attack factor, the thought of curds of anything is enough to prompt the gag reflex in most of us. According to Trillin, though, our northern neighbors are so fanatical about this poutine stuff that it's ubiquitous across Canada in numerous varieties, showing up in eating establishments from McDonald's to upscale French brasseries. But for those of us in the States? Sounds intriguing, but irrelevant. I have no plans to go to Montreal, and my cholesterol thanks me for it.

Xtra's CafAc in Carytown doesn't at first glance seem to be a likely candidate for serving Canadian diner food. The second-floor space, which sits above Bangles & Beads on Cary Street, is clean, modern and minimalist. The black and white marble floors and oversized oil paintings exude retro flair, and the heated outdoor patio seems made for cocktails and people-watching.

When I come in for dinner on a Monday night and find poutine Americaine on the list of appetizers, my heart starts to race a little. Poutine in Richmond! Brilliant! My excitement is tempered a bit by the Americaine disclaimer, though — no cheese curds here, just mozzarella — but the fries and gravy sound pretty close to the real deal. What arrives at our table is a plate of cheese fries with a light chicken gravy pooled at the bottom. It's not a revelation, and I wish the gravy was thicker and meatier, but it's a tasty pile of calories nonetheless.

After checking out the rest of the menu, the presence of poutine isn't such a surprise after all. It's just one example of international flavor in a lineup that reads like the restaurant section of the Manhattan yellow pages. Thai, Greek, Italian, Creole, Mexican, French, Californian and Middle Eastern cuisines all are represented, along with plenty of vegetarian choices. With so much variety, you'd expect more than a few missteps in execution, but what comes out of the kitchen is mostly solid.

One of my favorite appetizers is the savory crA"me brA¯lAce, a cheddarlike fondue with a nicely brA¯lAced sugar crust, served with crostini and apple slices for dipping. The fish taquitos, too, are a nice surprise — crispy spring-roll-like cigars with a sweet vinaigrette on the side.

It's worth ordering a salad if just for the dressing choices. All nine are house-made, and the honey-lemon Dijon and roasted pineapple vinaigrette are pitch-perfect. The classic Caesar could use a bit more acid.

Given Richmond's mediocre-at-best pizza tradition, I don't expect much in this category, but the flatbread crust on the Italian battalion is crispy and substantial, holding up beautifully under the generous pile of cheeses, veggies and salami. The pizzas are a good value at $9 each, and come with a choice of protein on top — chicken, shrimp, steak, portobello or tofu.

The sandwiches, too, are all less than $10 and come with a side. Our server suggests the Malibu turkey burger, and it's a standout. Purists who look for nothing more than good meat in their patty may not go for it, but the addition of garlic, onions and gorgonzola makes this one supremely moist and flavorful. The regular beefy version, the black Angus burger, is lackluster by comparison, but the Thai coleslaw on the side is almost good enough to compensate.

The best of the entrees we try is the chicken roulade, a chicken breast rolled up with pecans, sage and bread crumbs, very much reminiscent of a stuffed Thanksgiving turkey. The shrimp Creole is well seasoned but a little skimpy on the shrimp. For dessert we choose the candy-cane cheesecake and raspberry bread pudding, though the options change frequently. I hope for real raspberries in the pudding but the only identifiable berries on the plate are in the sauce. The cheesecake is nicely minty and warrants several good bites, but isn't tempting enough to finish.

While Xtra's turns out an impressive variety of dishes, after a couple of visits I'm left wondering where in the wide culinary world the chef's heart and soul lies. But if the goal is to offer something for everyone, chef Chris Ahart is doing an admirable job — making many things reasonably well is arguably more difficult than making one thing incredibly well.