A Special Place to Play 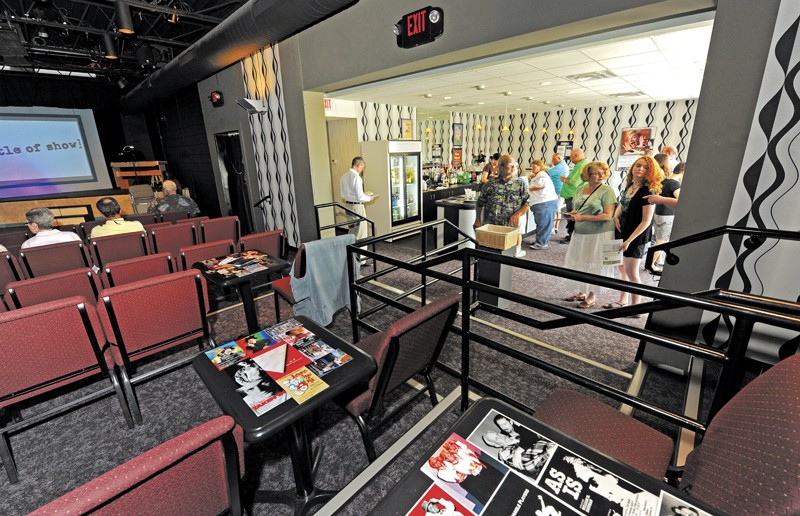 Late-arriving patrons settle into their seats. The house lights dim. And the big curtain slowly closes.

That’s right. There’s an early thrill in attending any play at Richmond Triangle Players’ new theater in Scott’s Addition. This is the moment just before curtain, when the sprawling, open space that theatergoers have entered directly from the street — a combination lobby, box office, concession bar on one side and auditorium on the other — is subdivided. With the patrons seated, an unseen crew member pushes a button and a darkly hued, floor-to-ceiling curtain crawls slowly and silently across the right hand side of the auditorium to create an intimate space for the performance to follow. This offers a touch of theatrical magic even before an actor hits the stage.

Since its opening in February last year, Richmond Triangle Players has delighted its loyal patron base, as well as those who’ve discovered the company more recently, with its spanking new home in an unlikely setting: the flat Scott’s Addition district populated by mostly red-brick, blocky, 20th-century warehouses. The neighborhood is bounded by West Broad Street, the Boulevard, Interstate 195 and train tracks that pass lead to the Acca rail yard. This area has undergone a dramatic transformation in recent years. It’s now a mixed-use neighborhood of apartment buildings, architecture firms, light manufacturing operations and offices. But who could have foreseen a theater company here?

Of course, one of the biggest pluses is that the company isn’t located on the top floor of Fieldens anymore. For 16 years, the West Broad Street nightclub was a generous and accommodating host to the once-fledging troupe, but the theatergoing experience wasn’t for the faint-hearted. Once inside, there was the challenge of the steep, rickety staircase (Wheelchairs? Forget it). And the gnarly restrooms prompted second thoughts about even considering attending a play there. But like the eventual pleasure of enjoying sand and surf after the torment of a traffic backup at the Hampton Roads Bridge-Tunnel, the Players' productions usually were worth the lack of amenities. Especially for its play offerings that presented gay, lesbian, bisexual or transgendered themes that might not have been offered elsewhere in Richmond.

After leaving its Fieldens home of a decade and a half, the company was itinerant for a season before it settled into a new home in another unlikely setting, the former Carl’s Radiator Repair Shop. From the outside, this 4,000-square-foot, one-story building with a mid-20th-century modern, brick, glass and glass-block facade was already as crisp looking as a ’50s flat top. But the interior needed an overhaul.

After the company worked closely with Evolve Architecture and Daniel & Co. construction (both Richmond-based) and received gestures of generosity from dozens of other vendors and sources, a transformation from industrial to a 99-seat theatrical space was achieved. It was in the best “Daddy says we can have the barn” can-do spirit of an old Mickey Rooney and Judy Garland MGM musical. First, the floor was excavated and four new bathrooms were built. Next came heating and air conditioning systems. A new roof was applied and new electrical systems installed.

Aside from the restrooms, dressing room and modest backstage space, most of the building remains one large and open room. But it’s a space with clearly defined activity areas. The lobby has large glass windows that look out onto the street, offering openness and airiness that the former speakeasylike atmosphere never allowed. The concession and bar areas are just to the right of the entrance and establish a hospitable but spacious-enough area to enjoy refreshments and to watch people.

Open and visible just beyond this lobby and box office is the theater space itself. The upholstered chairs, along a series of raised tiers, recall the spirit and arrangement of the former theater space. Patrons have the option to sit at small cocktail tables, a popular carry-over from the Fieldens space. These tabletops are covered with veneers of program covers from former productions, a gesture that sentimentally bridges the old and new theaters. The slightly raised stage stretches wall-to-wall across the auditorium area. The stage’s open-plan arrangement (it has no front curtain or wings; players enter mostly from points upstage rear) provides excellent sightlines.

The architectural success of the Players’ comfortable and unpretentious new space is matched by a spike in the quality of the work being produced. Last season the Players’ production of “Take Me Out” won best play honors at the Richmond Theater Critics Circle awards, no small achievement in Richmond, a community with a rich and broad range of theater offerings and bigger-budgeted operations.

Historically industrial Scott’s Addition, already the home of such Richmond casual dining institutions as the Diary Bar and the Triple — and more recently the handsome Stronghill’s restaurant — now offers a cultural destination. Who knew?