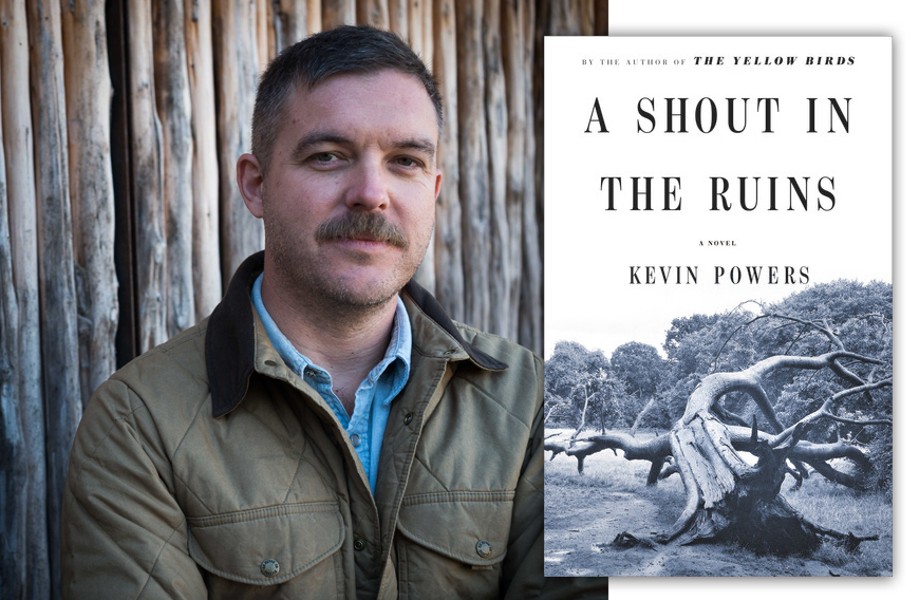 Kevin Greenblat Chesterfield native Kevin Powers received widespread acclaim for his debut book about his time at war in Iraq. Now he’s back with a book inspired by a murder that occurred in his home county.

After the hugely successful debut novel, "The Yellow Birds," a National Book Award finalist about his experiences in the Iraq war, author Kevin Powers set his sights on an older conflict closer to home: the Civil War.

Powers set his new book, "A Shout in the Ruins," in Chesterfield County, where he's from, though the book spans 120 years. Its complex structure and vivid detail from slavery already have led critics to compare his writing to literary great William Faulkner.

Powers is a graduate of Virginia Commonwealth University and now lives in Austin, Texas, with his family. He received a Guggenheim Fellowship in support of his new work — unsurprising considering his poetic debut was hailed as an instant war memoir classic.

Ahead of a local reading at the Visual Arts Center on May 17, Powers spoke with Style by phone about the new book.

Style: Let's start with the obvious: Why the Civil War?

Powers: A lot of what I do is an effort to find context for those parts of my life that feel confusing or inexplicable. War is an experience that feels totally aberrant and unnatural, but you eventually realize it's actually the opposite. War and violence are common throughout history. Violence and domination seem to be our default mode. When I came home from overseas, back to Richmond, I started to see that legacy everywhere. Not that I wasn't aware of our history, but I saw it in a totally new way and wanted to get to the bottom of it, or try to tell a story that would allow me to ask if it would always be that way.

The story has its origins in a historical murder that occurred [in Chesterfield]. Before they turned it into a steakhouse, the plantation house at Bellgrade loomed large in my childhood imagination.

How much historical research was involved with the new book?

A lot. Mostly I read books about the times and places I was writing about, but I also tried to visit museums and specific locations when possible. When writing the scenes set in Chimborazo Hospital, it was a great help to be able to go up to the Hill and walk around.

Ranger Mike Gorman was there and he's extraordinarily knowledgeable about the site and the history of Richmond during the war. Any mistakes the book might have in accurately depicting the times are mine alone.

Why does the Civil War continue to fascinate readers?

It determined what kind of country we would be. And because it's the last major war fought on American soil, people feel the proximity of it in a way they might not about our distant foreign wars. I wanted to show that there's a straight, unbroken line from that period and before, to the present. Our history isn't quarantined and safely closed off from the present, it's woven into the present in ways that are sometimes obvious and sometimes not.

Why does the book take the vantage point of two very different eras?

I was trying to depict how connected the present is to the past. I hoped having both of those story lines would allow me to communicate that and I structured the book so that at the end, everything would appear to connect in a meaningful way.

Did you know when you began writing where the story was going?

I had a fairly clear idea of the story I wanted to tell, but it took some time to figure out how exactly I was going to do it. It began as the story of an outsider, the Union officer who still plays a small role in the book, coming to Chesterfield to investigate a murder that had already happened. So that's dramatically different from how it ended up.

How did your own interest in writing begin?

There's a direct line from my love of reading to becoming a writer. My love of reading comes from my mother and my first-grade teacher, Ms. Bellanca. When I was a teenager, I started to read poetry and started trying to write my own very soon afterward.

Ultimately, it's a story about who we are and where we come from and how much hardship and pain is woven into all of our stories. But it's also about the miraculous way that love endures despite all that. I hope that would appeal to a lot of people, but I guess we'll have to wait and see. S