A Season for Traditions

A guide to Richmond’s most venerable holiday traditions.

Shopping for evergreens at the 17th Street Farmers' Market

The revered farmers market in Shockoe Bottom clings during its current radical makeover. But along East Main Street longtime vendors, as they have for more than 175 years, will still sell Virginia cedar trees and other greenery plucked from rural outposts. 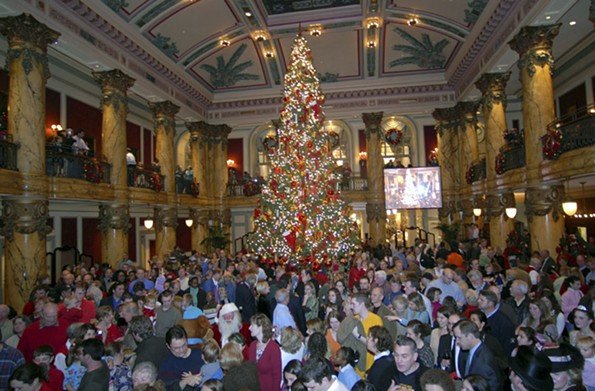 Christmas at the Jefferson

Since most public holiday traditions are outdoor events, there's something especially welcoming and cozy about the Jefferson Hotel's lavish displays — a large gingerbread house, a traditional crèche and the pièce de resistance, a towering tree in the marbleized lower lobby.

Thalhimers, a wing of which is imbedded in the Dominion Arts Center,` first brought this downtown Christmas parade to Richmond in the 1920s. While Santa and his entourage are still the highlight of the Broad Street spectacle, back in the day the jolly old elf climbed a fire ladder and disappeared through an upper window of the department store to begin his reign. Thalhimers is defunct, but the parade steps off again Dec. 1.

Religious Christmas events in public squares are difficult to pull off these days, but since 1931, thousands have gathered for the Nativity, Richmond's grand pageant. Originally held at the Capitol, angels, shepherds, wise men and the holy family now gather at the Carillion, Virginia's World War I memorial.

In 1934, during the Great Depression, local poobahs decided to consolidate competing charitable holiday fundraising into one campaign. Thus, the Christmas Mother was hatched. The program's success is due in part to the choice of an unimpeachable grande dame as the Madonna-like figure.

It was 1936 when the Miller & Rhoads department store, now the Hilton, introduced its Santa who received youngsters from a gilded throne. At lunchtime, he repaired to the emporium's Tea Room where, with the Snow Queen, he served cake to the diners. The store is a memory, but the Legendary Santa (with the original throne) now reigns at the Children' Museum of Richmond.

"The City of Candlelight"

If Richmond had an arbiter of taste, it was Leslie Cheek who served as the indomitable director of the Virginia Museum of Fine Arts from 1948-1968. In 1957, he attempted to instill good taste in the masses: Festooned colored lights made his head hurt. The Federated Arts Council, a former cultural group, promoted the idea of a single electric candle in each residential window. Today, tacky lights tours are popular outings and truth to tell, Cheek might approve of the aggressively creative light décors along Monument Avenue. 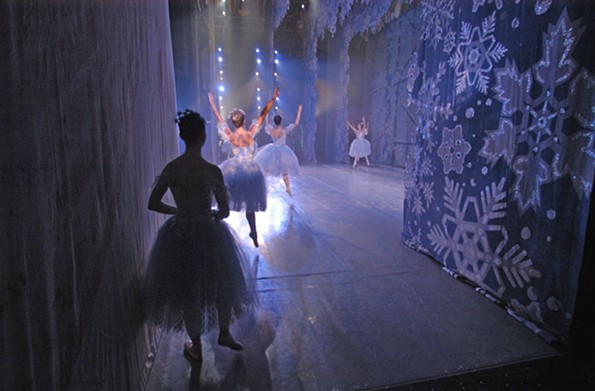 "The Nutcracker" The Richmond Ballet

It's been 125 years since Tchaikovsky's "The Nutcracker" premiered in St. Petersburg, Russia. Although dormant for decades, the spectacle became a sensation in 1954 after CBS broadcast the New York City Ballet's version into living rooms nationwide. In its inaugural year of 1957, the Richmond Ballet performed scenes and in 1963 mounted a full production. In 1984, the curtain went up on artistic director Stoner Winslett's new interpretation, and she has been tweaking it ever since. The New York Times' Alastair Macauley wrote of the Richmond production: "In my dream version of America, every state has a 'Nutcracker' this good."

"The Messiah" The Richmond Symphony

The Richmond Symphony, like the Richmond Ballet, was founded in 1957. It wasted no time in mounting its version of George Frideric Handel's glorious Christmas oratorio. On Dec. 1, even those not drawn to classical music can welcome the concert's seventh inning stretch when the audience springs to its feet in response to the "Hallelujah" chorus, a precedent set by King George II when he rose from his seat in 1741 at the thrill of it all.

Since 1975, a tradition at one of the area's most beloved destinations at any season is Maymont at Christmastime. On Dec. 3, in addition to upstairs-downstairs tours of the mansion gussied up in 1893 holiday décor, there will be carriage rides, tours, refreshments, Santa, plus the pleasure of the stark, quiet autumn landscape.

For the 31st year, 18th and 19th century historic sites and architectural treasures take precedence over the institutional medical canyons of Court End. The John Marshall House, the Valentine, the Museum of the Confederacy, the Executive Mansion and Monumental Church are among the places decorated with appropriate holiday flair and fling open their doors at no charge.

With the James Center complex opening in the early 1980s along East Cary Street, an attempt was made to animate its bland architecture at the holidays with an infusion of reindeer adorned with white lights. Rockefeller Center it isn't, but folks are drawn to it. Expect downtown's biggest annual traffic jam when the herd is illuminated, as well as surrounding high-rise buildings, on Dec. 1 at dusk.

The Gardenfest of Lights, which made its debut in 1995, is our newest grand holiday tradition. By experiencing half a million colored lights spread over 30 acres of thoughtfully planted gardens and grounds, what's not to like? The switch is flicked on Nov. 24 — see Arts and Culture in this issue.