A Salt on the Senses

The Shafer Alliance Laboratory Theatre is the little student-run troupe that could. 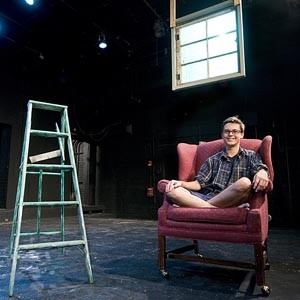 Walid Chaya knows only too well the demands of getting a musical off the ground. The Virginia Commonwealth University student purchased the rights for last month's “Godspell” production with his summer savings and with a little help from mom and dad. He got costumes on loan from Rumors Boutique and Diversity Thrift, and Smoothie King held a fundraiser to pay for the set. But for Chaya and the rest of VCU's student-run Shafer Alliance Laboratory Theatre, known as Salt, working under these conditions is a labor of love.

Located at the Shafer Street Playhouse on the university's campus, the theater group is trying to sink its roots deeper into the community and reach more students. Operating on a shoestring budget, it uses only VCU students as producers, directors and actors. The emphasis is on giving collegians needed experience by allowing them to produce their own shows for a live audience.

“We want to give directors as much freedom as they want,” says Tommy Callan, secretary of the group's board. “Ultimately it's their show.” After starring in the theater's production of “Endgame” last month, Callan will direct November's “All Hail Hurricane Gordo.”

“It's one of those plays where the characters are so thick and rich they just get burned into your mind,” Callan says. “There's humor in the chaos. … These people are hilarious.”

With eight shows in its season, the group has only a weekend-long run of each production. Because it shares space with other classes and productions, rehearsals tend to be brief. Board member Chaya says that his musical production has only four and a half weeks to get off the ground, and even then rehearsal isn't regular. While other shows go on in the playhouse's Newdick Theatre, Chaya and his crew will rehearse in classroom studios above. Student productions are only allowed to use the actual theater the week they go onstage.

“We have five days in that space. Three days will be teaching it,” Chaya says, speaking of the lighting and sound aspects of the show. “It's been a quick process.”

Though the group receives some funding from university's student government, Callan says it's small potatoes, and normally goes toward purchasing furniture. “We try to get directors to focus on minimalism,” Callan says. Though he's seen some elaborate sets in Newdick, he says, they must be put backstage every night because of the drama classes that use that space during the day.

“We're really trying to improve the stage that we have,” says Sarah Worden, another board member. “It's kind of a dump.” As if the spacing issues weren't enough, the students contend with minimal lighting and sound capabilities of the space and a noisy ventilation system, though some improvements have taken place recently. Theatre VCU donated a new lighting board, which the group has never had before, and Callan says that with a new crop of people overseeing the student organization, more improvements and donations may lie ahead. “There's so much more energy devoted to Salt,” Callan says of the 2010 season. “We have a lot of new blood.”

Perhaps favored highest of all the group's productions is its No Shame Variety Show, which hits the stage every other Friday. With Callan as host, the show is a student favorite.

“You get 10 minutes to do whatever you want and we won't judge you,” Worden says. The variety show has played host to serialized short plays with ongoing story lines, lewd stand-up, capoeira dance fighting, and, perhaps best of all, roasts of all VCU shows. After either a main stage or group show has finished its run, it finds itself in the No Shame cross hairs, often lampooned by the show's actors themselves.

“Tommy got up on stage and made fun of himself at the last one,” Worden says. “People making fun of themselves is always entertaining to watch.” Once “Animal Farm” (Nov. 4-7) and “All Hail Hurricane Gordo” (Nov. 18-21) complete their runs, the season will be rounded out by “Dark Play or Stories for Boys” and “The Effect of Gamma Rays on Man-in-the-Moon Marigolds.”