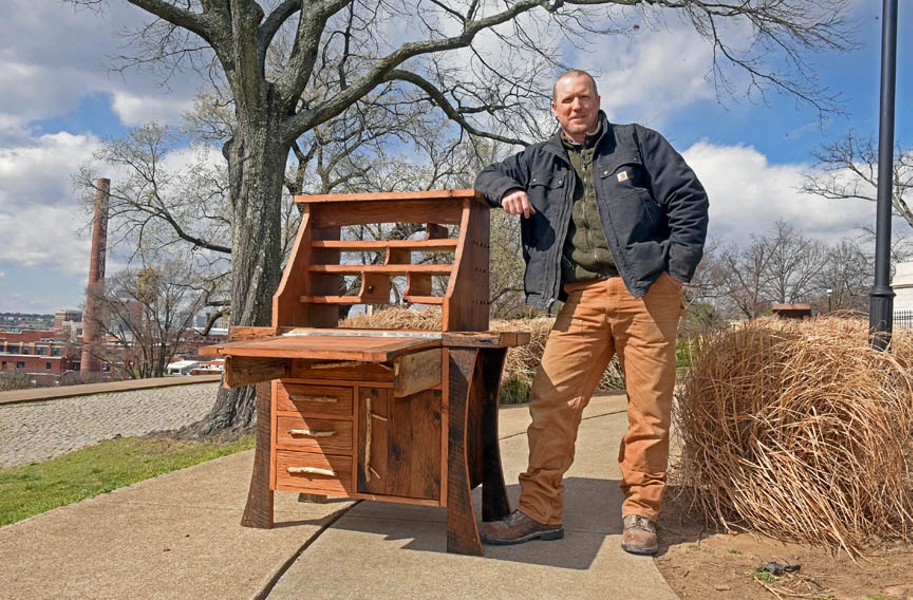 Working with his grandfather from childhood, Kevin Barry learned the finer points of crafting furniture.

He was taught that there are no shortcuts when designing and building, and that objects should be created as if his name were stamped all over them. The lessons stuck.

Several of Barry’s custom-made pieces, a writing desk and two reading chairs, recently were featured at Iridian Gallery as a complement to a photography show.

“These pieces loosely parallel the craftsman era,” Barry says of the American arts and crafts movement encompassing originality, simplicity of form, local natural materials and visibility of handicraft. “I enjoy looking at different styles for inspiration. Most of my designs come from traditional elements where I meld things that appeal to me.”

The writing desk manages to be elegant and rustic at the same time, using reclaimed floor joists from a 100-year-old Church Hill house, along with white oak for the desk’s writing surface and door faces and fence boards cut on a curve to create graceful legs. Small branches get new life as handles on drawers and a cabinet. For character, blemishes and saw marks in the wood remain while an oil finish gives the desk a warm, glowing patina more subtle than the shine of varnish.

“I like to use pieces like floor joists because they’re rough-hewn and irregular, so they tell a story of where the wood came from,” he says of a desk that took him 60 hours to create. Similarly, the pegs that attach the desk’s upper shelving aren’t sanded to be flush with the sides: “I liked the way they looked, so I decided to leave them.”

Reluctant to call his preference for reclaimed timber an ecological statement, Barry says it simply would be a tragedy to throw out perfectly usable wood. Creating a piece of beautiful furniture is a furtherance of the wood’s existence, he says, like shopping at a thrift store and giving clothing a second life.

For many years, furniture-making was only one service offered by his company, K Barry Custom Builders & Cabinetmakers, and usually then it was in the context of built-in furniture for renovations and remodeling. Making time for creating pieces artistic enough to land in galleries only became a focus once he committed to setting aside time for it.

With a mind that he says never fully shuts down, he synthesizes inspiration from the collection at the Virginia Museum of Fine Arts and years spent researching furniture history.

“I have notebooks of design ideas, tons of books on architectural history and design — too many, according to my wife,” he says — “plus I’m always looking at woodworking magazines. But I also like to look at the wood to figure out what it’s going to be.”

Although his grandfather died in 2013, his teachings still speak to him, meaning Barry is involved with a piece from start to finish. Part of his goal in crafting singular pieces of furniture using different combinations of wood is that they’ll be appreciated for 50 or 75 years and eventually passed down to a loved one.

His two handsome reading chairs fit the bill admirably. Their curved cherry backs were bent with steam, the seats are leather and the stretchers across the bottom, created from irregular scraps, present mirror images of each other courtesy of Mother Nature.

“There’s an element of me in all of these,” he says. “I channeled my grandfather more than a few times here. I want to keep going in different ways to learn, because when you stop learning, you die.” S