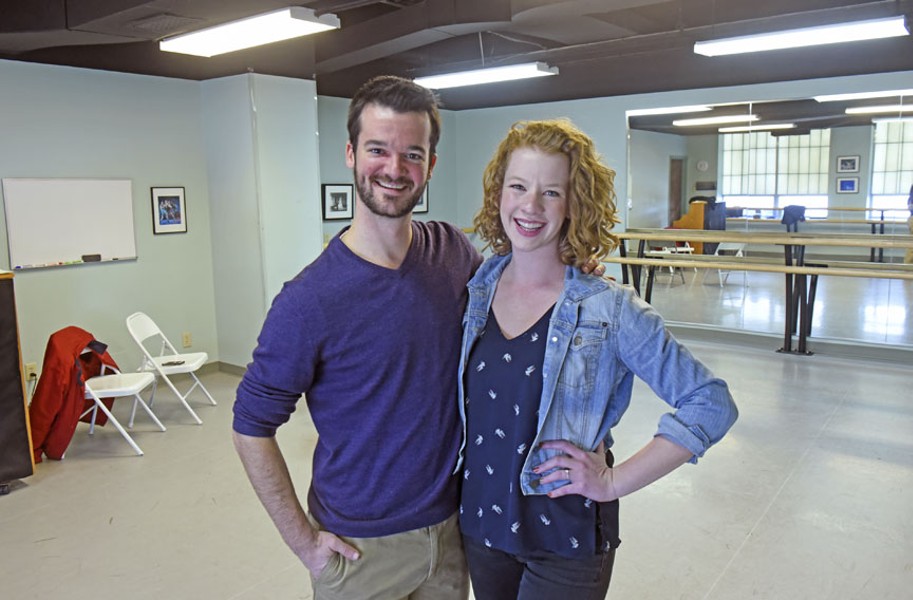 Scott Elmquist Paul Dandridge and Emily Berg-Poff met in a Richmond Ballet outreach program and then began appearing in the same local theater productions. Pretty soon, they decided to get married and make it official.

It was definitely not love at first sight.

Paul Dandridge and Emily Berg-Poff Dandridge met when they went to work for Richmond Ballet's Minds in Motion program after graduating from college. The acclaimed arts outreach program introduces dance to hundreds of fourth-graders across the state every year.

A born-and-bred Richmonder, Paul had been so inspired by his participation in grade school that he'd pursued his passion for dance to Indiana University's prestigious program, earning a degree in ballet performance in 2011. Emily arrived in Richmond that year after studying oboe performance and arts management at the College of Charleston, happy to have a full-time job.

"'Intimidation' was my first reaction," Paul says with a laugh. "Emily was trying to wear all of the Minds in Motion hats: teaching, playing piano and working as the full-time administrator. She was fairly badass and I was a little nervous and taken aback."

Emily says that her jealousy probably made getting to know each other harder.

"I thought it was so unfair that Paul grew up going through the program," she explains. "He knew the lingo, he knew everything about it. I was coming in as a total outsider who didn't know anything." The gap in their experience made the feedback they were getting at work very different. "Our rehash sessions were always: 'Paul, you are doing so great. Emily, you need to do this, this and this.'" Emily laughs, adding "I'm really competitive, which I'm sure didn't help with the intimidation factor."

The two worked through the initial rough patch and formed a tight work relationship that grew into a true love connection. They were married in an outdoor ceremony in June 2016 that featured dance performances by their students.

Thanks largely to Emily's eclectic talents, the couple has expanded their participation in the local arts scene beyond dance to theater, appearing together in several shows, most recently "Mary Poppins" at Virginia Repertory Theatre in December. Emily has choreographed a number of productions and will be playing piano for "The Christians" that opened at Cadence Theatre last weekend. The two also confirmed that they will be appearing together in the blockbuster musical "West Side Story" at Virginia Rep this summer.

Unlike Paul, Emily has done theater consistently since she was a kid.

"Auditioning for shows is what I did to acclimate to a new city or to a new situation," Emily says. "You automatically have friends if you have rehearsal every night." When a 2013 Huguenot Community Players' production that Emily was appearing in lost a cast member, Paul stepped in. "I had a walk-on role and an off-stage line, something like 'Come back here!'" Paul remembers. "That was the first nonballet performance I had ever done."

Three years later, they auditioned together for "Spamalot: the Musical" at Dogwood Dell. By then, they were engaged and fairly certain they weren't going to be cast because their wedding was right in the middle of rehearsals.

"At the audition, they asked us about conflicts," Emily says. "And we had to say, well, we're going to be gone for a solid two weeks, non-negotiable. But [director Joe Pabst] was very understanding." After a June wedding and a honeymoon in Paris, they returned to jump right into performances.

The couple asserts that their involvement in so many projects, even in the face of their demanding jobs at Richmond Ballet, enhances their relationship.

"We have the same jobs and we live together but the reality is that we see each other very rarely," Emily explains. "We have completely different teaching schedules, we're out at different schools so it's not like we're stuck in an office together. Depending on rehearsal schedules, we can go a whole day without seeing each other."

Paul adds, "Doing 'Mary Poppins' was actually the most we've seen of each other in a really long time."

Ironically, the only area where the Dandridges don't gel is in doing choreography, where Paul's analytical nature clashes with Emily's more expressionistic flair. Emily says, "Probably our worst fights as a couple have been over choreography. It's the only thing we have trouble letting go of when we leave the building."

In general, however, accepting their differences has been the key to their strength as a couple. "We have these similarities, being in the arts and performing, but we're very different people," Paul says. "We just accept that and let each other be our own person, and then we can really revel in the things we enjoy together."

"We have a great friendship," Emily adds with a smile. "So, even if I want to punch him in the face because some piece of his choreography is nonsense, at the end of the day we have that solid foundation. I know it sounds cliched but we're just best friends." S