A Richmond Artist Wants to Connect Communities Through Neighborhood Shrines 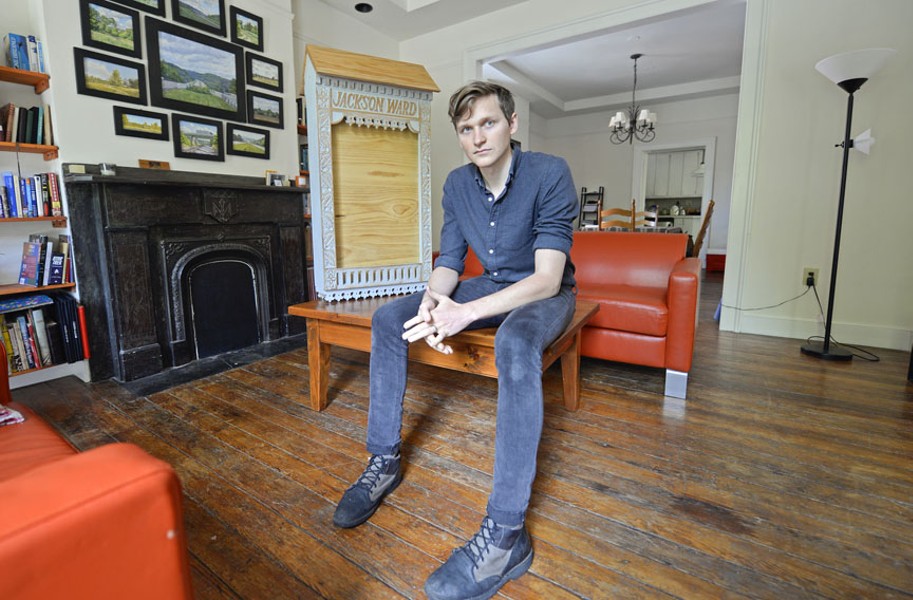 Ash Daniel Muralist and printmaker Barry O’Keefe sits inside his Jackson Ward home, near one of the sculptures he likes to call part of his “wooden social network.”

There’s something about the analog world that speaks to Barry O’Keefe.

Looking for a way to connect people in his Jackson Ward neighborhood after a shooting in 2013, the muralist and printmaker sought to create a focal point that might allow neighbors to come together, talk and relate as more than strangers.

The result was Open Inbox, a series of public sculptures — one is in Athens, Ohio, where he attended graduate school — created as tributes to different neighborhoods’ uniqueness and past. More than just beautiful objects referring to Greek shrines, the boxes are intended to be designated meeting points. Richmond lifers might see it as akin to making plans to meet under the Miller and Rhoads clock back in the day — but the sculptures also refer to message boards in the analog world.

“There are no legal outlets for posting fliers, but there’s demand for places to post stuff,” O’Keefe says at his neighborhood coffee shop, Lift. “I see this as a graffitilike way to leave a mark, but one that’s sanctioned.”

After the murder, he expected the neighborhood to come together, but it didn’t happen.

“It just felt too awkward for the neighbors to talk together about it,” he says, so O’Keefe’s goal became to create a place halfway between silence and the effrontery of knocking on strangers’ doors — specifically a way for people to connect as part of building a neighborhood sense of community.

Rebelling against a world he perceives as increasingly more harried and anonymous, O’Keefe decided to build something beautiful and reverential that would belong to everyone. His inspiration springs from the location, and he begins the process by wandering, taking photographs and then researching the neighborhood’s history to determine the patterns that he’ll carve on each box.

“It’s a process of finding the visual language and symbols of a particular place. With Jackson Ward, it had to be the porches,” he says, referring to the abundance of highly ornamental cast-iron porches on most of the 19th-century houses.

He uses white oak from Chris Fox of Fox Natural Building in Ohio. Fox identifies standing deadwood and uses draft horses to bring it down from a mountain near where he lives. He then mills it by hand.

Each of the shrines is paired with 100 handmade invitations that O’Keefe either hands to people who live in the neighborhood or leaves in their mailboxes. They both invite people to use the box and provide a map of where it’s located.

“It’s also a piece of art for them to keep, because I make each one individually by screen-printing,” says O’Keefe. “Once the boxes are installed, it’s out of my hands. It’s public property at that point.”

Grants provided the funding to build the first five boxes. Ultimately, he’d like to start casting the shrines in bronze so that they can become permanent neighborhood fixtures, but in the meantime, he’s looking for funding to build more of them out of wood.

And right now, he’s working with the Richmond Public Arts Commission to get permission to place others, hopefully this summer. Currently, he’s looking at Patrick Henry Park in Church Hill, Abner Clay Park in Jackson Ward, Oregon Hill Park in Oregon Hill and the McDonough Community Gardens in Woodland Heights. O’Keefe grew up on Forest Hill Avenue, so he’d like to see more on Southside.

“It’s like a wooden social network,” O’Keefe says of “Open Inbox.” “If people see it as a pretty sculpture that allows the neighbors to post messages, I’ll be satisfied. I don’t expect them to change the world. My goals are lofty — my expectations modest.”

The pieces, along with handmade books about each neighborhood, will be on display as part of Gallery 5’s First Friday Art Walk in May. S