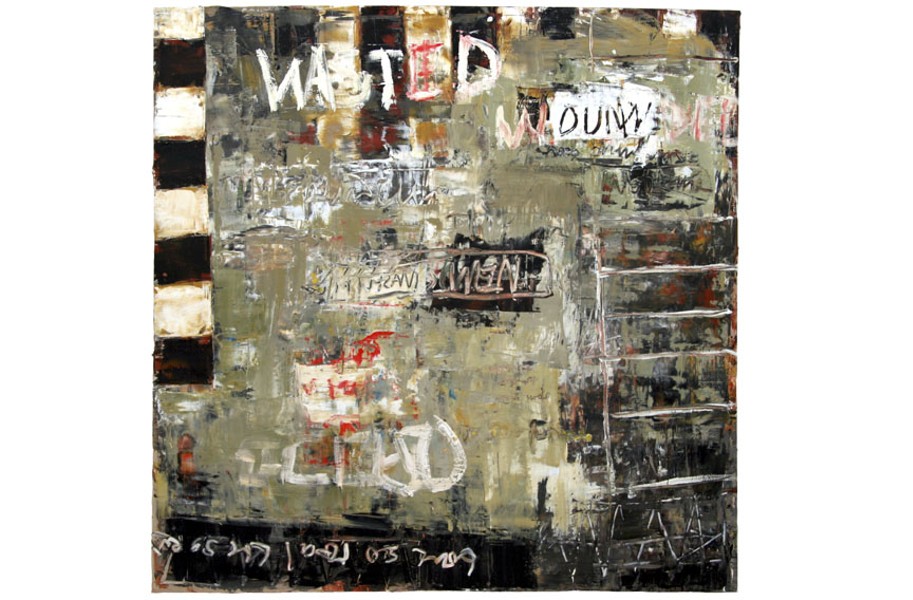 "Timeworn Walls and Open Wounds: a Bill Fisher Retrospective" is a fitting tribute to the artist's career that includes his presence in an overt way, shown by "Bill's Throne" (2005-2017), an installation with Fisher's recliner chair, easel and scraper all covered in dried paint alongside his tattered black jean jacket.

Yet the exhibition is more than a sentimental, elegiac goodbye. It offers the breadth of Fisher's abilities by highlighting work — most of it never seen by the public — from the early 1980s to his death in April. Critically riveting, this exhibition is a must-see.

There is nothing particularly interesting about the way the work is hung, mostly chronologically, or the gallery itself. It is a plain, no-frills space. This is favorable, though, because attention can be given to the individual works, and the best are those from the late 1990s until 2016.

The earliest paintings, three self-portraits, are representational and feature the artist, with the exception of "Self-Portrait at Beach" (early 1980s), staring outward. While he looks toward the visitor, his face is blank, unengaging and expressionless. These works provide perhaps the most literal version of Fisher as a haunted man: hidden beneath a pair of dark-rimmed glasses, shirtless and exposed to reveal a scar across his chest, or as a ghostly form that recedes into the surrounding dark background.

A sense of expressionist angst is present throughout his work, but beginning in the mid-1990s, Fisher traded the figure for abstraction. It wasn't until recently that representation reappeared in his paintings and then in the form of crude cartoons and writing as seen in the works on paper that were also shown in 2016 at Quirk Gallery in the exhibition "Catholic Boy," which explored the parochial education of his childhood.

Language is another theme. Words have been scrawled into the multi-layered surfaces of paintings like "Untitled (white)" from the mid-to-late '90s. While the words seem decipherable, legibility is a futile task as the heavy-worked surfaces of oil, plaster and encaustic subsume the handwriting. Even with works such as "Float On" (2001) there is a tension between legibility and geometric formalism in the scuffed surface. It was not until last year with "My Dumb Life" or "Coal Train" (both 2016), that words reappeared as communicative statements and then they are playful puns: "coal train" alludes to Fisher's love for the music of John Coltrane and the painter's upbringing in West Virginia.

There is, instead, a coded language in the work that is enacted through text and the repeating iconography of a ladder. It has many forms. It sometimes looks like two parallel lines as in "Untitled (the knife)" (2006). It acts as repeating geometric pattern in "Washed and Wounded" (2016). It appears like a scribbled puncture in "Green Wall with Red" (2006). The meaning is unclear; Fisher never offered an iconology for his work.

It does bring to mind German artist Anselm Kiefer's neo-expressionist paintings from the 1980s that included ladders as allusions to spiritual or biblical matters. Of the body of works, "Wasted and Wounded" (2016), which takes its title from Tom Waits' song, "Tom Traubert's Blues (Four Sheets to the Wind in Copenhagen)," stands out as it combines all these elements of coded language: legible and indecipherable text, a heavy-worked surface of wax and oil paint in a muted color palette of earth tones and reds, and multiple ladders. This painting, and the best of Fisher's paintings expose, as another lyric from that song states, "a wound that will never heal," or a story of tragedy that resists any sense of pathos. S

"Timeworn Walls and Open Wounds: A Bill Fisher Retrospective" is at the Flippo Gallery at Randolph-Macon College through Dec. 8.