A Retrospective by the Dean of Virginia Architects, Carlton Abbott 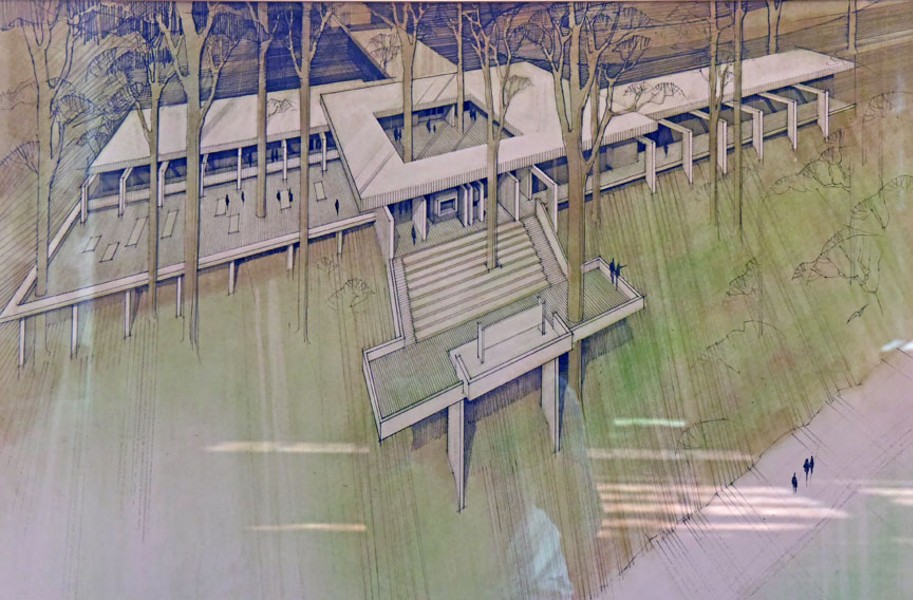 Williamsburg-based Carlton Abbott, whom many consider the dean of Virginia architects, is the subject of a career — no, make that a life — retrospective exhibition now gracing the Branch Museum of Architecture and Design. Scores of drawings and renderings of his often ambitious architectural designs and schemes, spanning half a century, cover the walls of the two largest galleries in the Tudor revival mansion on Monument Avenue.

There are also a few dozen meticulous drawings of weathered rural buildings and farm implements that reveal Abbott's reverence for the American past. Additionally, a smattering of his achingly beautiful sketches on post cards record European places he's observed. His foreign travels started relatively early; after graduating from the University of Virginia School of Architecture, he studied at the Ecole des Beaux Arts in Fontainebleau, France.

The upshot from Abbott's exquisitely rendered and thoughtful oeuvre, however, is not what those familiar with his work might expect: That would involve being hammered and dazzled (depending on one's aesthetic) by his powerful and unapologetically modernist and brutalist designs in a range of building types, from houses to museums.

We have a number of his completed works in Richmond. These include the long admired steel footbridge that spans the railroad tracks linking Riverside Drive at West 21st Street with the James River Park. More intimate are his Fan District pocket parks from 1974. Paradise Park is in the 1700 block of Grove and Scuffletown Park is near Strawberry Street, both contain hulking poured concrete seating and jungle gyms (the latter sadly, painted more recently). In Hanover County, Abbott designed the hauntingly skeletal but spiritually evocative Polegreen Church memorial on the site of a 274-year old sanctuary where a Presbyterian pastor, Samuel Davies, became the first non-Anglican cleric licensed to preach in Virginia.

Rather than stark architectural designs, however, the take-away from this exhibit is how Abbott celebrates the natural landscape — be it in a relatively pure state such as an Atlantic beach or in altered form as along an urban riverfront. He is an architect who seeks not to dominate a site but to bring out its possibilities. In addition to a pure ideal, another key to his success has been an ability to draw poetically, luring clients with renderings that could well be theater sketches for the most sweeping and romantic Wagnerian opera. 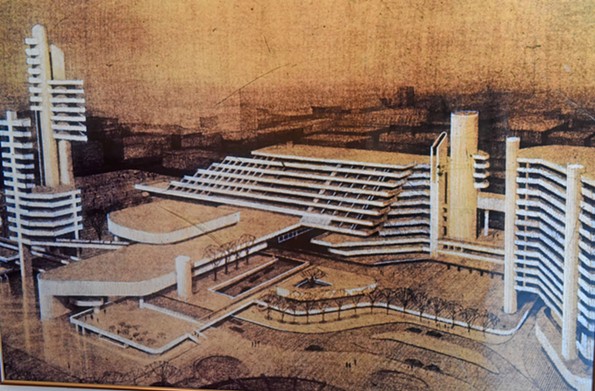 His most striking drawings are often done from a bird's eye view. Consider his proposed civic center for downtown Richmond. It is futuristic and ignores the existing street grid, but offers instead a brilliant ensemble of linked structures that creates something akin to a massive rock outcropping. And for his False Cape State Park proposal of 1968, he shows sweeps of beach and keeps the architect's touch relatively light.

In most of his drawings nature rules: His 1974 design for the Williams House near the Piankatank River celebrates what seem to be towering oak trees.

The only diversion from this overriding natural aesthetic is his curious 1975 design for the Peninsula Fine Arts Center in Hampton Roads. With symmetrical columns supporting a classical pediment, Abbott apparently caved temporarily to the post-modernism craze that was gaining traction at the time. Abbott's stripped-down classical structure recalls the work of the late Princeton architect and industrial designer Michael Graves who was the movement's guru.

If Abbott rises above the work of so many of his contemporaries in timelessness and an ability to express himself in line well before computer-assisted design became the norm, there were other factors at play. His father, Cornell University-educated Stanley Abbott, was a highly regarded and successful landscape architect who shaped two of Virginia's sweeping masterworks of mid-20th century infrastructure. These were the Colonial Parkway connecting Williamsburg with Yorktown and the Blue Ridge Parkway. On these and other projects, the elder Abbott worked not just on the high concept but on small details such as signage. Importantly, he also took his son along on the job. And design ideas and their history were discussed at family meals and gatherings. Add to all this that Carlton Abbott's grandfather was an accomplished artist. Never underestimate the gene pool.

Is the current show a perfect viewing experience? Not exactly: The number of works could have been halved, especially since many are masterful and powerful. And many of the pieces are hung so high it is impossible to read the labels.

But most importantly, "Carlton Abbott: 50 Years of Architectural Drawing" celebrates the considerable talent and highly focused work ethic of an architect with an idea worth working for: harmony with nature. S