A break from touring. An ad hoc cast of top-shelf collaborators. The influence of dub reggae deity Lee "Scratch" Perry.

It’s not just the recipe for the wordless and searching new album from Revelators Sound System, the duo formed by singer-songwriter M.C. Taylor of Hiss Golden Messenger and bassist Cameron Ralston of the Spacebomb House Band. It’s also how British singer and guitarist John Martyn recorded a set of songs that helped Taylor and Ralston get on the same page as listeners.

Rewind to 2014. Ralston sets off on a European tour as bassist for Hiss Golden Messenger, traveling from city to city in a van, spending his first meaningful hangout time with Taylor and going “super-deep,” as Taylor puts it, on John Martyn’s “One World” album as the kilometers tick by. It’s not the only music they listened to on the tour, which was in support of another Brit, singer-songwriter Ben Howard, but “One World” captured the same sense of inquiry that makes “Revelators” — just released on the 37d03d label — such a remarkable set of recordings.

Open-minded music fans tend to have plenty to talk about, and that tour through Europe was an opportunity for Ralston and Taylor to learn about each other’s tastes. “It was a very instant connection,” Ralston remembers.

“We both seemed to be into the same type of traveling between musical types,” Taylor says. “We were just into the same stuff — the same kinds of music, from reggae and dub to free, out stuff to R&B, gospel. Whatever you have.”

“He’s one of the most well-versed fans of music that I know,” Ralston says of Taylor.

Their sonic omnivorousness comes to bear throughout “Revelators.” It’s an immersive, elliptical journey split up into four instrumental tracks, starting with ten half-harried, half-mournful minutes of “Grieving,” continuing with a pair of reflective episodes in which piano, strings, clarinet and saxophone take turns drifting to the surface, and ending with the hard-grooving lead single, “George the Revelator.”

On the day the closing track was released, in his Kitchen Table Speculator email newsletter, M.C. Taylor called the album “a different kind of music,” noting its stylistic distance from the roots-informed, lyrically driven material to which his fanbase has grown accustomed. It’s a discography Ralston helped grow on multiple occasions. He served as producer on a pair of singles released on 7-inch vinyl — 2018’s “Hiss Golden Messenger Meets Spacebomb” and 2020’s “Let the Light of the World Open Your Eyes (Alive at Spacebomb Studios).” And just last year, a nascent version of the Revelators Sound System partnership assembled a full LP’s worth of dub-inspired bonus material to supplement the “O Come All Ye Faithful” seasonal album.

“We’ve had a few things that we’ve made together,” Ralston notes, “but this Revelators project is pretty unique in the lineage of the projects that we’ve worked on.”

“I’m stoked because this is a side of him that I’ve known since the day I met him,” Ralston adds. “This is in his bag, in terms of aesthetic, and I think a lot of his fans aren’t super-aware of that and are probably going to be pretty surprised when they check this out.”

“One reason I love this project is the way it lets me work in places that either aren’t usually a part of the sonic aesthetic of Hiss,” Taylor says. “Or if they are, they're really buried in the mix.”

The “Revelators” mix was handled in part by Ralston — just one of the ways the bassist was able to flex his range in the studio. Another is the string arranging that makes the album’s third track, “Bury the Bell,” so spellbinding. “Writing string arrangements is always special for me, because I don't do it a lot,” he says. “Especially in the Spacebomb umbrella, it’s not really a role that is mine.”

More familiar was the personnel who contributed during the portion of production that took place at Spacebomb Studios. While Ralston logged plenty of solo time there — tinkering, ideating, recycling strings by sending them back through a tape machine — he also brought in plenty of session talent that knows the Richmond facility inside and out. “Everybody was game at that time,” he says.

A number of players who contributed to the earlier Hiss-meets-Spacebomb projects showed up for these mid-pandemic sessions, including drummer Pinson Chanselle and keyboardists Daniel Clarke and Devonne Harris. Richmond-based saxophonist and bass clarinetist J.C. Kuhl turned in an especially arresting performance on the album’s fluid second track, “Collected Water.” “With Spacebomb, there was a way where I could have them at the studio during COVID, but us not really interact in any sort of close-quarter way,” Ralston says.

The seeds that grew to become “Revelators” began germinating in closer quarters. Ensconced in his North Carolina home studio in spring of 2020, while working on songs that would become his 2021 LP, “Quietly Blowing It,” M.C. Taylor started looking for a whole other language to express feelings of grief born out of the tumultuous intersection of the pandemic’s onset and the murder of George Floyd. “Everything was so hard for so many people at that moment in time,” he says. “Some of us have developed, or have, this certain frequency that started ringing, and it hasn’t really stopped. I was making this music initially just to go to my own space for a little bit and meditate, basically.”

He flew solo for more than a month, looping guitars and crafting impressionistic pieces all his own. But Taylor found himself bumping up against limitations, as the emotional articulations he was reaching for remained outside his grasp. “I thought that I wanted to make something that was small and insular,” he says, “but I realized quite quickly that I needed to be communicating with someone.”

Ralston came to mind, not just because of their previous studio successes, but also because of a deep resonance between Taylor’s and Ralston’s pathways through 2020 — particularly as parents. “Everybody has had a hard time over the past few years,” Taylor notes, “but parents had a particular type of burden with trying to carry hope for your kids but not lie to them. I think that’s another reason I thought about Cam a lot, too, at the beginning, because his kids are my kids’ ages but a year behind.” 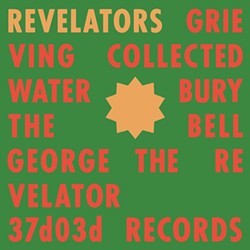 “The music that we were making was all fed by this kind of energy, these events,” Ralston says. “That’s what’s resonating sonically. It’s important that we attempt to try to continue to discuss and talk and give to it.” (“Revelators” is giving in more than one way; 10% of the album’s proceeds will go to Colin Kaepernick’s Know Your Rights Camp.)

Taylor wasn’t physically in Richmond during the sessions at Spacebomb, paving the way for a novel collaborative style — providing high-level input from afar as Ralston and company applied emotional coloring and shared the results. (“I could get used to that,” Taylor jokes.) Much of that back-and-forth centered on feel, and on which instrumental voices might be a good fit. “It was an interesting process for the stuff I was sending to be so personal and small and intimate,” he says, "and then Cameron starts working with it and sends it back. I felt like I could be pretty objective about it and give some directions in terms of the shape of it… I loved being able to do that.”

Amid a time of widespread disconnection, Taylor and Ralston added to an increasingly storied web of connectivity that spans the I-85 corridor. The network that links artists based in Richmond and Durham is an elaborate one, but many of those partnerships stem from a single shared endeavor: a reimagining of the Alan Lomax field recordings that helped shape America’s understanding of its own folk music.

This “Sounds of the South” program was performed as near as Duke University in 2010 and as far away as the Sydney Opera House a few years later by members of two pivotal ensembles: Richmond’s own Fight the Big Bull, those lineup over the years included Cameron Ralston and Pinson Chanselle, as well as “Revelators” percussionists Reggie Pace and Brian Jones, and Megafaun, which was co-founded by Durham-based brothers Brad and Phil Cook — two of Hiss Golden Messenger’s closest collaborators.

“I love the bands and the music and the people that are working there,” Ralston says of Durham. “I continue to meet more and more of them, and we’re all cut from the same cloth… Geographically, it’s so close. And Richmond feels bigger than Durham, for sure, but they both have that small town kind of feeling.”

While Ralston called the sub-three-hour drive between his house and Taylor’s a “day trip,” realizing this particular vision was an opportunity to bring the two communities even closer. “That was a touchstone thing with making this record — the broad community, or broadening the community,” Ralston says. “There are people that played on the record that I still haven’t met in person, but I feel like are old friends now, in a strange way. Same with [Taylor].”

John Martyn made “One World” at a time when he was becoming disillusioned with what he saw as competition that existed between players within particular genres. “There ain’t no ‘scene,’” he once said. “The whole thing’s a scene.”

Across four expansive tracks that started as one person’s method of meditation, “Revelators” shows the very best of what community has to offer — even at a distance — while reaching the same conclusion Martyn did: Music has the power to break down barriers, and to turn that which is deeply personal into a universally resonant form of expression.

“However sharp the technique is,” Taylor says, “if you’re communicating the emotion of the piece, then it’s good.”

“Revelators” is out now on the 37d03d label. To purchase the album, visit lnk.to/RevelatorsSoundSystem. Hiss Golden Messenger will perform at the Jefferson Theater in Charlottesville on August 30. Doors open at 7:00. Tickets are $22.50 in advance and $25.00 at the door and can be bought at jeffersontheater.com. For the latest on Cameron Ralston’s performances, visit instagram.com/cameronthewise.