A Recessionary Tale Part 2: The Studios 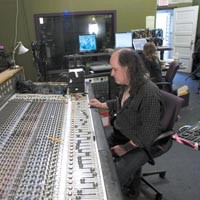 Sound of Music Recording Studios will celebrate its 15th anniversary this fall with lots of hoopla and special events. And Richmond's three-story, 10,000-square-foot downtown music studio deserves to celebrate. Times have been trying lately. First there was the three-alarm fire in March 2007 that damaged its building. Soon after that was finally cleaned up, the economic recession kicked in like a below-the-belt shot from a Telecaster guitar swung by Keith Richards. Employees at the studio grew worried while bands scheduled to record in the coming months began putting off their plans for precautionary reasons — or perhaps because a band member had lost a job.

Jonathan Lee, studio manager at Sound of Music, also performs in several bands and runs his own record label, SMTG, so he knows about the economic difficulties from several angles. He says Sound of Music, which gets roughly 60 percent of its business from local recording artists, has had to take on more small projects than usual.

“Instead of just working on full albums from start to finish,” he says, “we've been a part of a lot of projects on only one step — be it tracking, overdubs or mixing.”

Many know that the studio on West Broad Street was co-founded by Cracker frontman David Lowery, but people may not know that it has a sister studio in Belgium called Sounds Like Music, or that it's recorded fairly well-known names including the Black Crowes, GWAR, Lamb of God, Archers of Loaf, Sparklehorse, Daniel Johnston, Labradford and countless other local and regional bands.

Since the recession started, the studio has been making the usual cost-cutting moves: changing carriers for normal services as well as doing away with everything but the essentials. “You just do what you can to adapt to the times and keep the business rolling,” Lee says. “It's nothing too new since most of us in the music industry have to struggle to make our passions our living.”

Lee is quick to add that Sound of Music has been lucky to stay busy considering that many local bands and artists can now afford the digital technology to record cheaply at home. “More than the economy, the digital age has really affected everything — you see distributors and record labels folding every month,” he says. “For bands of all levels, merch sales are up but attendance to shows is way down because people don't choose to spend their disposable income on going to shows consistently.”

For all of these reasons, many studios have long been forced to diversify their offerings. Since 1991, Metro Sound and Music Co. has been a vintage music gear store, while also providing rehearsal space, repairs and lessons, and serving as a Pro Tools-equipped, 64-track production facility offering recording and video production.

“You lump all these streams together and you get a pond,” says owner and founder Mark Szafranski, who started the business after he graduated from Virginia Commonwealth University. “It's definitely a labor of love.”

Szafranski notes that discounts and cheaper prices have become the order of the day, and that he's had to cut prices by half in some areas where he used to make his profit. But large crowds from First Fridays have helped, and he also now offers free seminars on operating new recording technology. “Instead of trying to fight the big monster, we just joined it,” he says.

Shockoe Bottom recording studio In Your Ear has always had more of a focus on original sound production for advertising and film, but it's also branched into video, narration recording and education over the years. And why not get the most use possible out of in-house talent and such expensive equipment?

One of the smaller music recording studios that hasn't felt a hit since the recession started is Minimum Wage Recordings, which sits near the gates to Hollywood Cemetery in Oregon Hill. Maybe those nearby spirits like the haunting strains of “Eleanor Rigby” as performed by Boots of Leather, floating on the breeze — but owner Lance Koehler has managed to stay lucky with clients.

“I've had a handful of people cancel because they lost work, but I had a line full of people to fill those positions,” says Koehler, who also plays in the No BS Brass Band. “I'm cheap and consistent, so that keeps me busy.”

Koehler says that although many people are trying to record at home themselves, he often sees people spend $1,000 on recording equipment and then “pull their hair out over the next six months” to eventually create a product they don't like. “They find out that it's a lot harder than it seems,” he says.

Concerning gigs, he adds that his band is still being booked fairly regularly. “I hope it's like the 1930s where the Depression actually got people going out to clubs so they could drink their woes away,” he says.

Sound of Music's Lee thinks Richmond is suffering from a musical identity crisis — noting that the scene feels fractured with disparate elements spread around the city in various clubs that can seem to come and go with the wind. Local musicians must adapt with a do-it-yourself approach in many areas, he says, even though recording in a professional studio offers advantages over homemade projects.

“In some ways this is an exciting time,” Lee says. “The whole kill-corporate-rock idea of the '80s and '90s has happened, it's just happened in a way that has affected independent artists too. But right now is a great time for new ideas and experimentation.”