A Recessionary Tale Part 1: The Musicians 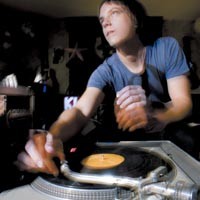 The Carter Family sang about “No Depression in Heaven” and the latest Neil Young disc is brimming with anti-bailout sentiments. Safe to say, musicians aren't strangers to hard times. Presumably, a local musician's life is one big recession of sorts, living gig to smoke-filled gig, supplementing here and there with the obligatory day job or grueling night shift. But some have found ways to make money off their music beyond just the weekly gigs and CD sales, and others have found ways to save some dough using the most free software they can find. A few folks from this tenacious bunch give us some insight on how things are going these days.

Mixmaster to the Stars
Joel Burleson

The mastermind behind Ki: Theory makes music that takes you away from the dismal news of market dips and layoffs, working sonic wonders with samplers and assorted technical wizardry. But Joel Burleson's not just making his own music. With his in-house studio and production know-how, he's cranked out remixes for notable names such as Ladytron and Kings of Leon, and also put together a new disc of his own material smack in the middle of a recession, to be released soon.

While the big-name mixes might suggest he's cashing in like Timbaland, it's more about exposing his name and production style to various fan bases.

“It started with remixing a friend's band and eventually grew into larger ones. As far as income though, it depends,” Burleson says. “You get some money if they sell a bunch of remixes, but when I do it for bigger artists it's really about the exposure. My remixes are basically the words of the original song laid down over Ki: Theory music, so people really get a sense of what my sound is all about through that.”

Burleson also acknowledges that “touring is more of an expense than a money-making endeavor” and that Ki: Theory chooses its shows selectively. One gig he couldn't pass up was Bonnaroo, which he'll play with his live bandmate, drummer Ash Burn. “I think even though there's less money to go around to spend on recording, equipment, gas, merch…,” he says, “people are still attending shows as an escape to forget the troubles of the day.”

“I bet there is a lower suicide rate among musicians as compared with other demographics,” jokes the Recliners' frontman, Russell Young. “Musicians are more likely prepared or conditioned for hard times than most, but don't let it fool you. Musicians get hit extra hard, work dries up and then choices have to be made.” He cites outrageous health care costs as one of many tough calls a struggling artist must make.

Young has created a formidable force of power lounge with his outfit the Recliners, which has its velvety roots firmly planted in Texas and now Richmond. Young founded his group — which churns out Sinatrafied covers of songs by, say, Blondie or the Beastie Boys — in the mid-'90s in Austin, Texas, earning accolades as the city's best cover act and wedding band. When Young moved to Richmond a year and a half ago, he fired up an East Coast incarnation of the Recliners, which now plays regular gigs at Cafe Diem. But he hasn't given up on the Austin version, which is still stocked with musicians and playing Young's loungy arrangements. So Young's succeeded in creating a successful band concept and replicating it.

While he's not franchising at the rate of Starbucks, he's not living up to his band's relaxed namesake either. The dapper lead singer is one busy dude and serious businessman. Over 14 years, he's built up the entity that is the Recliners through touring and airplay, properly trademarked the name, and continues to book and arrange the songs for the bands in both cities, which offers a tantalizing image of a power-lounge franchise jamming out to Billy Idol's “White Wedding” in every major North American city. But Young also plans to start playing out with his solo side project, Liner Notes, soon. Lounging never took so much work.

Hot Lava is seemingly bulletproof when it comes to this whole economy thing. Its members are the hip, tech-savvy up-and-comers who've built an electro-empire online with very little overhead to record and distribute their infectious music. In fact, vocalist Allison Apperson says that they've actually been somewhat inspired by the downturn.

“We've worked out about three new songs since this ‘crisis’ began,” she says — “all of them having something to do with work or hating to work or getting by.” Apperson adds that devoted Hot Lava followers are still game for shelling out some green on merch. “I guess no matter how bad things get, people still want ridiculous T-shirts.”

She realizes the power of being resourceful during difficult times. “When we were touring last month,” she says, “we actually made a spreadsheet and budgeted our trip a little bit. We'd never done that before. Part of it is that we're learning and part of it is that we're broke.” All four band members are working day jobs, but it hasn't stopped the music. “There are so many cheap and free tools out there for bands,” she says: “MySpace, Virb, PayPal, whatever. Many free ways of advertising upcoming shows. It's kinda mind-boggling.”

She has, however, seen some artists take a hit: “The thing I've noticed is that I've stopped going to as many shows. It's harder to part with five bucks right now. Sounds silly, but it's true.”