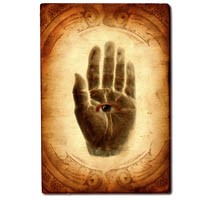 I believe in one's innate ability to access an inner path to higher ground, but I also wish that someone else would navigate the steep and rocky terrain for me, or at least leave those little fluorescent arrows en route. I make appointments with an intuitive and a clairvoyant, hoping to unpack my problems and leave them at their door.

Because the cards are so beautiful and mysterious, I've always had a fascination with tarot. So I decide it's time for a real, honest-to-goodness reading done by a professional who, unlike me, doesn't have to stop every 10 seconds to look something up in the accompanying book.

I set up an appointment with Janet Saad-Cook and head over one Friday morning to Alchemists at Stony Point Shopping Center to see what her cards have to say. Saad-Cook has long silver hair, rings on every finger and dark, kohl-lined eyes. It's obvious that she's intimately familiar with each card, even before she tells me she's had the same deck for 30 years. When Saad-Cook was a young girl, her mother helped develop her innate psychic abilities with a regular deck of playing cards, just as she'd been taught by her mother, and so on.

First she asks me to cut the deck with my left hand, accessing the intuitive side of my brain, which I think is the only side I use anyway. Then she tells me I'm waiting to hear about a large sum of money (I am) and that it will come soon (it hasn't). She laughs with delight when she sees in my future The Fool, complete creative expression, and The World, a glorious coming-together of all the elements of my life. But she expresses deep concern at the Ten of Swords in my recent past, an indication of a traumatic event I am not yet over.

And this is when, as predictably happens at some point when all the attention is focused on me, I begin to cry. Saad-Cook shifts from her role as fortuneteller to comforting mom. She kindly but sternly tells me that in order to fully heal and complete my life's work, not only must I refuse volunteer opportunities in the future, but I must also relinquish all such positions in the present. "I don't care if the other moms at the preschool call you a bitch," she says. "Don't do it!"

I meet the clairvoyant, Michele Bigness, at a Starbucks, which is a very strange place to communicate with the dead. "I see that you have a hyper dog that pees everywhere and annoys the heck out of your cat," she says, an observation I confirm. Then, Bigness tells me about the grandmotherly woman she perceives in the ether, desperate to get me a message. After a series of questions, we deduce the woman is an old friend of my mother's. "Get your mother on the phone," Bigness says. I comply.

"Your friend wants you to know she made it to the other side and that she's OK. That it wasn't anybody's fault," Bigness tells her.

My mother confirms that her friend's death was a suicide and that she's been unsettled by it for years.

This woman, whom I've never met before, says several other things that are chill-inducing in their accuracy -- things that make me mad, things that only a good amount of time will tell. Was the boy in college who broke my heart not a jerk, but just not into me? Probably. Will I move to the West Coast and write for national publications? No telling. Do I believe people can access other worlds and channel them into coffee shops and bookstores? Definitely. But what I do with the information they relay is entirely up to me.

I'm not ready to invest in a dog trainer anytime soon, and even though I feel crunched for time, just last week I joined the publications committee of the pre-school auction.

Janet Saad-Cook can be reached at Alchemists Books and Gifts at 323-5563 or by visiting www.

alchemistsbooksandgifts.com. Michele Bigness is available at www.mediumability.com or by calling 675-4309.