A Question of Balance

The art of going crazy at the University of Richmond. 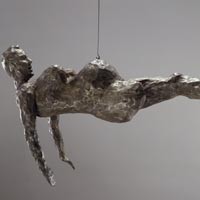 Sometimes you have to let your mind wander and not worry that it will never come back. The reality that it will return as sound as it left — now that is a whole other fear. What if you don't even recognize it when it does return?

“Before the show opened a woman came and asked if all the artists had mental illnesses,” says Elizabeth Schlatter, deputy director and curator of exhibitions at the University of Richmond Museums, “and I said, ‘Well, who's to say?'”

“Slightly Unbalanced,” the recent show at the university's Joel and Lila Harnett Museum of Art, is a traveling exhibit of 18 well-known artists. The overall theme of the work questions the notion of normalcy through the reflections on the obsessive-compulsive, neurotic and peculiar tendencies that make us all humans.

The show encompasses a range of media: video art, installations, photographs, paintings and drawings. So many different forms are needed to cover the complex spectrum of abnormality. With so many varied abnormalities a person can locate themselves in one of the displays and find a reassuring acceptance or unsettling exposure to this frank reality.

The works are not representations of psychotic behavior, psychopathic tendencies, and visions of Hell — these are the uncomfortable feelings carried within the mind of every individual trying to balance life. Upon entering the exhibit a sound that exists somewhere between laughing and crying fills the air (it is strange how they resemble one another). Much of the work is offered as the artists using their own perspective as a mirror. These manifestations of the mind become 3-D representations through the cataloguing and language of the artists.

Crazy on you: “Untitled (Perfectionist)” by Sarah Hobbs.

Some of the more personal work, such as the paintings of Sean Landers, resembles the tortured reflections of a 14-year-old going through heartbreak, as if no one else in the world ever felt this way. It is precisely this ownership of personal differences that makes the show so strong and available to the viewer. While at the same time some pieces such as Danica Phelps “Summer 2002” are so specific of an event in the artist's life as to leave the viewer confused and wondering how this particular process was a coping mechanism.

The show also offers an idea of multiple selves and how a person's quirky character trait can be treated as a distant cousin who no one invites to dinner. The act of separating the selves and showing them to an audience produces a startling disbelief when exposed.

Beth Campbell's work delivers an intricate mapping of possible decisions. She portrays a starkly honest path from the decision to do a window installation to ending with the burglary of a house. Every slight fracturing of her overcalculating mind is mapped for the viewer.

The video work by Harry Dodge and Stanya Kahn plays with the idea of the artist as a stereotypical character disguised as a self-obsessed manipulator. These boundaries of identity are delivered as the punch line for a joke. Alex Bag's hilarious “The Van” also offers a focused exaggeration — but not by much — on this notion of the artist.

These collective efforts to show diversity and uniqueness cause a blurring sameness to develop. “Slightly Unbalanced” begs the question: If everyone was crazy, who would know the difference? And would there be any reason for any of us to find our way back to sanity? S

“Slightly Unbalanced” is on display until March 4 at the Joel and Lila Harnett Museum of Art at the University of Richmond in the Modlin Center for the Arts. Call 804-289-8276 for directions and information or go to museums.richmond.edu.