A Picture's Worth a Thousand Words

Language is limited. It can fall short of certain ideas or emotions. Misinterpretation occurs: Our intentions become misconstrued, our meanings mangled, our understandings skewed. Expressions are used until they're broken and words are repeated until they sound like nonsense. Indeed, communication is difficult. How do we make sense of it all?

The group exhibition at Reynolds Gallery, "Missed Connection," posits that art both transcends the confusion in our communication and exemplifies the strange beauty of being lost in translation, when our interpretations take unexpected detours. Known for its impressive contemporary collection, Reynolds offers a notable group show that ranges from local arts champions to international names familiar to the readers of art history books. 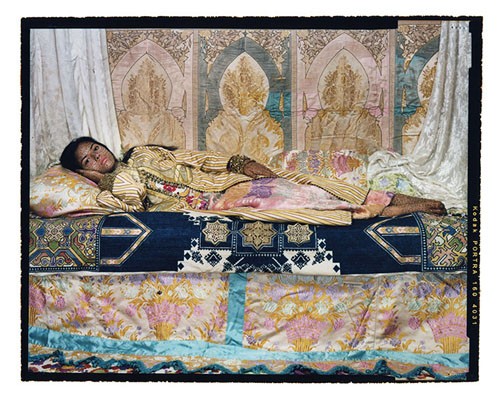 The strength of this show is the balance achieved between use of text and use of image in communication. Mel Bochner solely uses text in his compositions, "Blah Blah Blah" and "Talk Is Cheap." The letters are painted in loud colors that are visually exciting but say very little, a nod to pop culture and the volume with which we're bombarded daily. Richard Carlyon confuses the relationship between the medium and message with his censored "Emento," a text-based piece featuring taboo words that remain recognizable despite certain letters missing. Sara Mizer's delicate glass piece, "Language Slump," leaves viewers with an urge to pick apart and interpret, as glass lines spell out unreadable words in the act of slouching over small pins.

A solid theme that pervades the show, perhaps unavoidably, is the relationship between cultures and the cross-references and universal qualities common to each — Sanford Biggers' repurposed Civil-War-era quilts, Sonya Clark's combs wrapped in colorful thread, a playful piece by John Baldessari. Jiha Moon's paintings are lively, textured conglomerates that combine East with West, old with new, naturalism with abstraction, and physical media with trompe l'oeil techniques to create her own visual language.

A native of South Korea, Moon conjures perfectly the historical characters and symbols that once carried weight but may not necessarily carry the same meaning in this new context. "Luck of Irish" features actual and simulated fortunes popular with Chinese takeout food and fortune cookies. One portion of the painting imitates the pattern of a cloth bandana, while the bandana itself is used elsewhere in the piece (the piece of cloth reads "made in USA"). Ink and woodcut techniques refer to ancient Chinese, Japanese and Korean traditions, while bright, toxic neon colors and marks evoke a street-art sensibility, resulting in sumptuous, dizzying spaces.

The dimensions of Lalla Essaydi's chromogenic prints run deep while they explore culture and meaning. This Harem series was photographed inside a 19th-century Moroccan palace. The female figures blend into their ornate, lushly textured environments, not unlike the impressionist odalisque paintings which problematically used Orientalist imagery to romanticize Eastern cultures. Each woman is inscribed with calligraphic henna script (a subversive quality in its own right, as calligraphy mostly is restricted to men in Islamic culture). Essaydi, a native of Morocco, created the series in hopes that it would help viewers resist stereotypes.

Most of our communication is nonverbal and intuitive, and our gestures and body language can either send the desired message or miss the mark entirely. The latter isn't the case in Arwa Arbouon's I'm Sorry, I Forgive You series. The diptych shows a tender, reconciliatory moment between a husband and wife. As viewers, we don't know what necessitated this moment, but we understand the comforting resolution. Much is communicated through the use of pattern and motif. Covering the figures in these beautiful patterns elevates the act of compassion to a beautiful, ornately decorated moment, one that's as deserving of our admiration as those used in religious works of art.

The expression "Show, don't tell" is widely used by English professors to emphasize the importance of using action and description in writing to create a particular texture, feeling or character as opposed to merely stating a condition. "Missed Connection" is successful in bringing together works that tell and many more that show. S

Missed Connection will be on display at Reynolds Gallery through Oct. 12. Information at reynoldsgallery.com or by calling 355-6553.