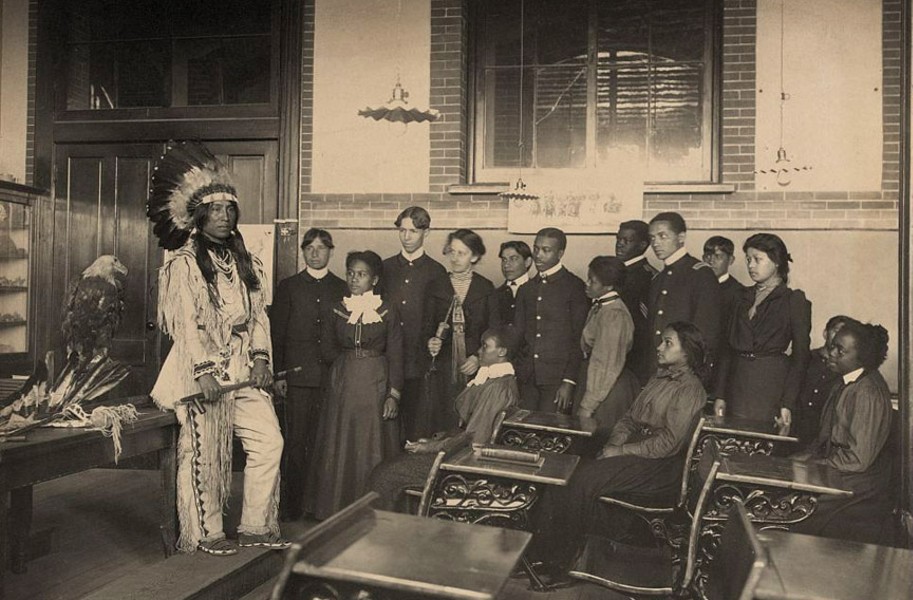 Louis Firetail, a member of the Sioux tribe, stands in full tribal clothing addressing an American history class. Between 1878 and 1923 more than a thousand Native Americans attended what is now Hampton University.

It's highly unlikely you read about Richard Gill Forrester in a history book.

Yet in 1861, Forrester secured his place in Virginia history by saving the U.S. flag at the Richmond State Capitol when it was discarded after Virginia voted for secession. On April 3, 1865, Forrester not only returned the flag, but raised it in victory over the building.

A new photography exhibit at the Black History Museum titled "Yesterday's Stories, Today's Inspiration," displays two photographs of Forrester, one as a 5-year-old and the other as a middle-aged man with enormous white muttonchops. The photographs provide a glimpse into a life largely unknown to most visitors.

In curating the exhibit, historian Elvatrice Belsches knew that she wanted to expand the narratives most commonly shown regarding the black experience. With a goal of bringing forth stories that introduce, educate and inspire, Belsches sorted through thousands of photographs in an effort to share important yet lesser known stories, including the extraordinary legacies of free blacks in Richmond before the Civil War.

From the onset, she wanted to supplement her choices from the Black History Museum with equally strong photographs from private collections and various repositories such as the Library of Congress, the Valentine, Virginia Union University and state and county sources. The images date from around the late 1850s to about 1960.

One of her goals in curating the exhibit was to display the artistry of two of the most gifted portrait photographers in the late 19th century South, black Richmonders James C. Farley and George O. Brown and his children, George W. and Bessie Gwendola Brown.

"In the pantheon of black photographers of the late 19th century and early 20th centuries, several loomed large in chronicling various facets of their communities," Belsches explains. "New York City had James Van Der Zee, Washington D.C. had the Scurlocks and Richmond had the Browns. Through the prism of these gifted Richmonders and others, the exhibit provides images of black men, women and children that exude the dignity, pride and hope that is pervasive to the present."

Photographs from Armstrong High School show an all-girl cooking class, each student in a chef's hat and full white apron. In one of the boys' woodworking classes, we see teenage boys in jackets, knickers and high socks, busily at work crafting with a variety of tools.

In a late 19th century image from Hampton Institute, Louis Firetail, a member of the Sioux tribe, stands in full tribal clothing addressing an American history class. Between 1878 and 1923, more than a thousand Native Americans attended what is now Hampton University.

It's the stories and lives of people like Forrester and Firetail that the museum hopes to bring to the public's attention. "We're always going to recall Martin Luther King or Rosa Parks," says interim executive director Adele Johnson. "But there are so many others worth remembering. One out of every four African-Americans has a connection to Virginia. There are so many firsts we have here."

Such a first is George Lewis Ruffin, a free-born son of Richmonders, whose 1869 photograph is included in the exhibition. Ruffin was the first black to earn a law degree from Harvard University, the first black elected to the Boston City Council and the first black man appointed a judge in Massachusetts.

Familiar buildings and street names abound in the exhibit, in some cases providing clues to what preceded the city we now know. An 1885 photograph of the first building constructed for Hartshorn Memorial College, which was eventually incorporated into Virginia Union University, is shown to the right of Bowe plantation. Clearly it was the inspiration for nearby Bowe Street.

"There's a lot to be proud of and a lot to learn about these people we've never heard of," Johnson says. "I learned that Virginia Union used to have a law school. I had no idea. There are so many stories to be discovered in this exhibition." S