A Nonfan's Guide to Enjoying the UCI Road World Championships

Brush up on your rainbows and cowbells, Richmond. 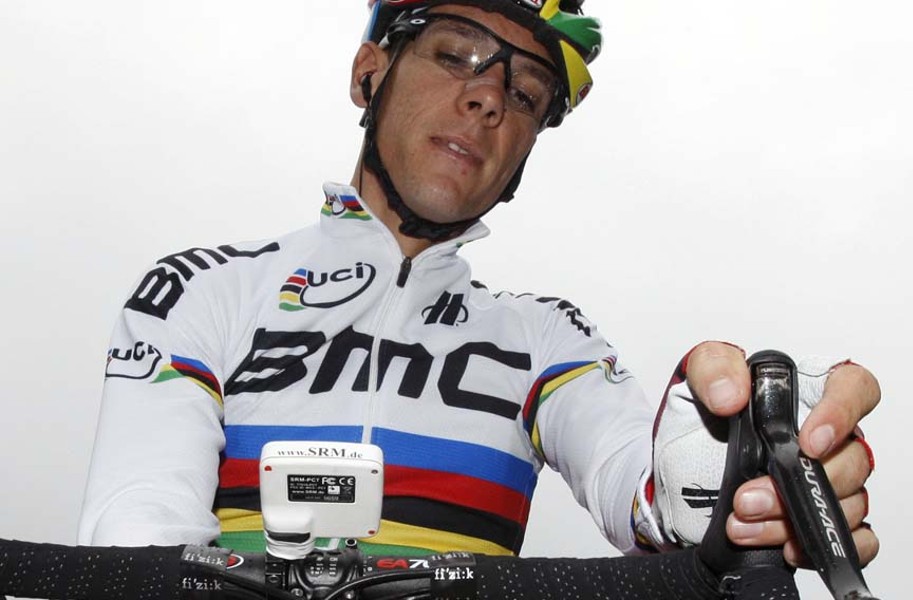 Reuters Wearing the rainbow: BMC Raging Team rider and 2012 UCI Road World Champion Philippe Gilbert of Belgium prepares at the start of the Tour of Lombardy in September 2012.

Will there be one winner?

No. The World Championships mark the end of the road racing season, and for many riders it’s a last chance to redeem a season — or a career. You’ll notice that even the shorthand for the race, Worlds, is plural. That’s because there will be 12 champions in three disciplines in the nine days of racing.

What’s with the rainbows?

Unlike stage races, where jerseys are awarded to the best climber or sprinter, these races are single events, and the first three cyclists across the line are awarded gold, silver and bronze medals. Gold sounds great, but the reason everyone wants to cross the line first is to win the rainbow jersey. Only a world champion can wear the rainbow jersey, and even then, only for a year. The time trial winner wears the rainbow during time trials, and the road champ wears it during stage races. The rainbow is prestigious and its winners will sport rainbows on their collars or sleeve cuffs for the rest of their careers.

The rainbow uses the same colors as the Olympic rings, because at Worlds, riders represent their countries — except in the team time trials. Cycling teams usually have international rosters and are referred to by their title sponsors (remember Trek and Postal?). Since these trade teams ride together all season, they ride together in team trials.

And yes, that means season-long teammates will compete with and against each other during Worlds. No big deal. Richmond is used to the brother-against-brother story.

How do I make sense of the races and courses?

In short, there are two types of races: time trials and the road circuit.

The team time trial is a bit of an outlier, as mentioned earlier, and only recently returned to Worlds competition. Trade teams work together one last time. Riders take turns pulling at the front, with their teammates drafting behind to conserve energy. The aerodynamics really do make that much of a difference during long, flat courses. Watching a pack of riders brake into a turn and re-accelerate is something better appreciated in person than on television. (Course scouting Sept. 19, team time trials Sept. 20.)

Often called the race of truth, the individual time trial is a race against the clock, with no drafting or other riders involved. Riders will scout the course to form a mental map of the best lines to take through turns and avoid rough patches in the road. (Scouting Sept. 19, time trials Sept. 21-23.)

The road circuit race is a 10-mile loop, or circuit, stretching from Davis Circle east to Rocketts Landing. The elite men’s race starts at the University of Richmond before settling into 16 laps around the circuit. That’s a lot of cornering. (Scouting Sept. 24, Road Circuits Sept. 25-27.)

Where are the trickiest places for riders?

In traditional races, riders will conserve energy in one huge group called the peloton. In a circuit race, when everyone wants to be out ahead of the group for strategic — and safety — reasons, the peloton doesn’t stay together for long. Navigating these twists and obstacles is why the fastest riders, or sprinters, don’t necessarily win.

The cobbled sections of Libby Hill and 23rd Street may spell bad luck for some riders. Riders will try to ride single file along the edges to minimize their chances of a chain slipping off or a tire pinching flat. Even if no such drama unfolds, it still looks great.

The course includes several short, steep hills that will annoy riders more than exhaust them. Riders accustomed to short bursts of effort do best on these courses. The 23rd Street climb is very steep for one block. The climb at Governor Street is included in every race, and marks the last chance to get into position for a slightly uphill straightaway, called a false flat, before the finish-line sprint. While the elite riders might not show their pain on Libby Hill, the less experienced riders will feel the burn.

The fastest way to corner a sharp turn is to brake before the turn, when the bike is still upright, and then lean in. The momentum pulls riders through, where they will quickly regain their speed with pedal strokes. That textbook example gets complicated when riding in a group, especially the peloton, the largest group where riders sit to conserve energy. When a cluster approaches a turn, the front riders’ braking creates an accordion effect behind them. Riders at the back of the group must brake before they would like, losing momentum into the turn, and ultimately must exert more energy to catch back up to the riders in front. It’s not a big deal once, but it will make a difference after a few laps.

Teams will try to usher their chosen teammate or teammates around the course, but any time the course isn’t flat or straight, riders will try to gain ground. Team groups will be split, temporary alliances will be made and betrayed, and it will all happen on the fly.

How do I behave? And what about my dog?

For the nonfan, the race is as much about people watching as it is race watching. That’s OK, cycling fans enjoy the tailgating atmosphere too. If you find yourself taken in, or utterly flummoxed, feel free to ask the race fan next to you.

As for etiquette, there won’t be barriers along the entire route, which means race organizers depend on the courtesy of spectators to not interfere. That courtesy has been tarnished in recent years, in part, by the rise of selfies. Trust us: Leaning into the road to capture a shot of cyclists hurdling toward the back of your head only captures the image of a dumbass.

The race course also will include vehicles, whose drivers are watching out for riders more than spectators’ feet. Even with barriers up, cycling isn’t a good spectator sport for dogs. Among the reasons are cowbells, which are very much a part of cycling. Virginia Tourism is even giving out cowbells at area ABC stores. You could try to find a quiet spot to watch, or grab a cowbell yourself and join in.