A Night on Boogie Island

Shormey brings her kaleidoscopic pop to Brown’s Island for this week’s Friday Cheers. 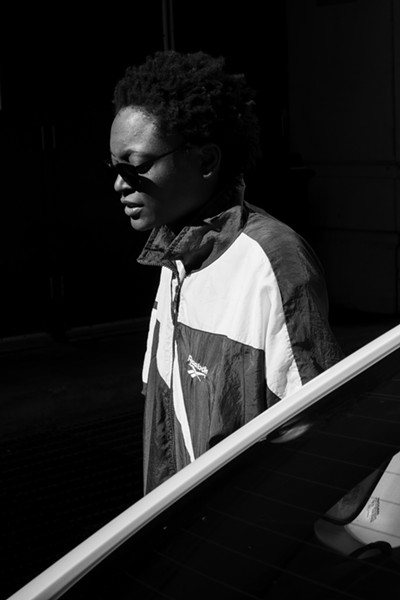 From a bedroom in Chesapeake, Virginia, you can go anywhere.

To “Boogie Island.” To a party that sounds like it’s happening in orbit. On a “Cruise!” through the sounds of the 1970s.

Shormey Adumuah, the Chesapeake-based pop auteur who performs simply as Shormey, makes immersive, kaleidoscopic music — a world unto itself that she’ll be bringing to this week’s installment of Friday Cheers.

Shormey is in the midst of an action-packed return to performing. She was in Norfolk on Saturday on a bill headlined by Baltimore-based electronic musician Dan Deacon — her first full band show since COVID-19’s onset. The next night she was in Richmond for a revue hosted by the New York-via-Richmond label, Citrus City Records. Next stop: Brown’s Island on Friday, June 17, opening for Grammy-nominated Snarky Puppy alum, Cory Henry.

Every musician’s path through the pandemic has been unique; finding the right time to take the stage again is no different. “I just didn't feel comfortable with it,” Shormey says. “I had been performing almost three or four years straight, it seemed. I was ready to give it a rest, and I just wasn’t in a hurry to come back to it.”

In 2020, she released “God Bless Bob Ross: A Collection of Low Fidelity Recordings,” the follow-up to the previous year’s momentum-building EP, “Boogie Tape Vol. 1.” She often cites the sounds of the 1970s as a chief source of inspiration. “It’s what I grew up on, and what I identified with as my music. I grew up [in the] early 2000s, late 1990s [and] liked the music that was out, but the music I identified with was always Stevie [Wonder], Motown, early disco. That early 1970s, mid-1970s, maybe late 1960s stuff.”

But if you’re hoping for a straightforward homage, look elsewhere. Her growing discography is wholly singular and powerfully personal, resulting from a self-produced creative process. The liner notes for “Boogie Tape Vol. 1” confirm she recorded the entire EP within the confines of her bedroom, an approach she maintains to this day. Lately she’s been working on a project that’s slated for fall release, with an emphasis on incorporating dancier, more electronic drums and more varied instrumentation, as well as pairing the old-school sounds of organs and Clavinets with newer production techniques.

Shormey started her journey as a musician around the age of 14, inspired by the way R&B star Babyface made a name for himself as a songwriter. “His whole thing is writing songs,” she says, “so it started there — being a huge Babyface fan and wanting to write songs like that. But I wasn’t like, ‘Oh, I want to be an artist.’ I was content with writing songs.”

She attended Virginia Commonwealth University in the early 2010s before concluding her studies at a community college closer to home. Shortly after, she started making trips an hour north to investigate the music community she witnessed earlier in college. “I wasn’t really involved in the music scene while I was [at VCU]. That was the first time I’d ever heard of house shows and stuff. When I was ready to get into music like that, I was like, ‘I have to go to Richmond.’” She remembers driving up to Richmond on weekends: “I ended up, kind of on accident, at the Citrus City first anniversary show, and I was blown away by the bands that were playing. I think it was Lance Bangs, back when they were Collin Thibodeauxx, and Camp Howard… I was like, ‘I need to figure out how I can be a part of this somehow.’”

She decided to email some of her early work to Citrus City co-founder Manny Lemus, who has since taken on a management role in Shormey’s career.

"It kind of snowballed into that eventually, through the years,” she says. Their partnership has resulted in multiple cassette releases, including two that sold out additional pressings. Having her songs on a physical medium carries extra meaning for Shormey, who has long been creating homemade copies of her recordings to distribute when she performs.

"It might not even be the most quote-unquote professional thing,” she says, “but I still like burning stuff on CD-Rs and having them at shows… Slowed-down songs and random demos and stuff. I’ll put that on a CD-R and give it away after a show.”

That sense of immediacy — of having a filter-free connection between Shormey’s creative impulse and her vibrant and varied music — is part of what makes following her recorded output so rewarding. The inverse is true as well; once she did dip a toe back into performing via a recent solo set, she was reminded of how much she enjoys sharing her songs in real time. “I didn’t realize how much I missed it.”

Her live ensemble is a trio rounded out by bass and drums from bandmates that live outside Virginia. That made rehearsing during the pandemic a challenge, another reason Shormey didn’t rush back to the stage. “It was kind of difficult to get together. But now that things are opening up, it’s easier to get together to practice,” she says. “I feel better about things, and how we want to progress with the set and the music.”

A great reason to make your way downtown on Friday, when Brown’s Island transforms into Boogie Island.

Shormey will open for Cory Henry at Friday Cheers on June 17. Doors open at 6 p.m. Tickets are $10 in advance and $15 at the door. Children 12 and under are free. For tickets, visit myticketstobuy.com/event/1814. To hear Shormey’s music, visit shormey.bandcamp.com.