Food Review: Bella’s Restaurant doesn’t serve perfection, but pound for pound, it sure is a nice place to eat. 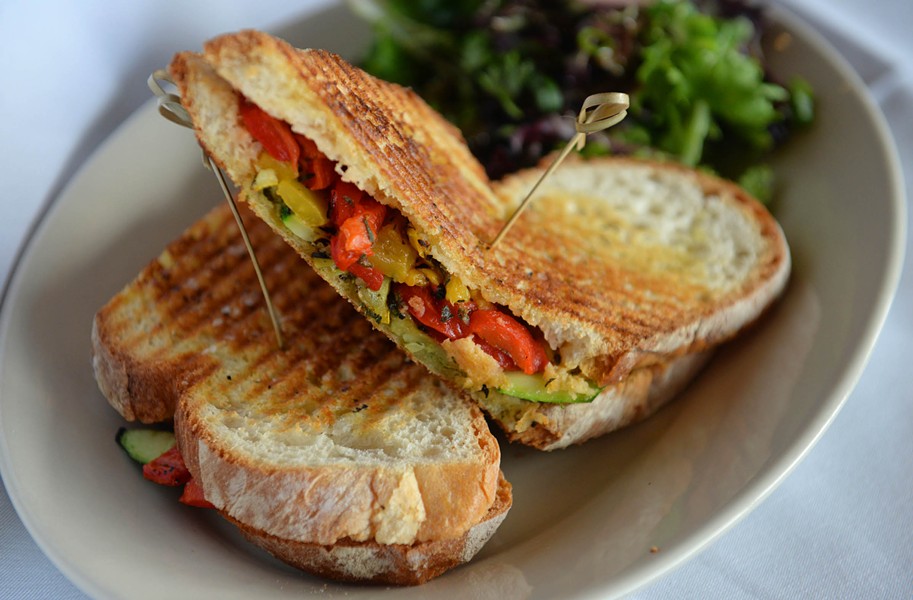 It seems like much of the new guard of Richmond restaurants is focused on educating the city’s palate about food and drink, and how good — and cool — it can be. I love this. But I also appreciate a place that isn’t going for any of that. A place where you don’t have to guess what you’re going to eat or ask too many questions. Where you can bring anyone — kids, parents, grandparents — even the ones who aren’t adventurous, and have a nice, pleasant meal. This is Bella’s Restaurant.

Opened last summer in a Short Pump strip mall, sandwiched between Wal-Mart and Peter Chang’s, Bella’s is the new kid on the block for family-style Italian, although owners Valeria Bisenti and Douglas Muir opened the first Bella’s in Charlottesville in 2012.

On the outside, it isn’t much to look at. Inside, and away from the congested fray, the space is calming and easy: sepia-toned photographs, a massive wooden bar and lighting just low enough. Also, there’s no din to shout over, just cozy jazz somewhere in the background. Need helping reading the menu? Grab a pair of community reading glasses at the host podium. The message is loud and clear: You’re at home here.

Like a good mom, Bisenti sticks to the tried and true, and the menu doesn’t stray far from the obvious as far as Italian Roman fare goes. The thing you’ll need help with is how much food is enough — and the friendly servers (with thankfully zero affectation) will let you know. Hint: An entrée for two easily feeds three, maybe four.

Pasta, naturally, is the common denominator. (Gluten-free readers: Don’t leave now, there’s pasta here for you, too.) It can be a feat of timing for any kitchen to serve several pounds of noodles per table. This means that sometimes noodles come out just right, other times, not so much.

The ragu Bolognese ($19/$32), a thick, three-meat sauce over eggy pappardelle, is on the wonderfully al dente end of the spectrum. It’s rich and warming, and flavor rules. Same goes for the zuppa di pesce ($25/$48). It’s less a soup and more of a sweet tomato sauce dense with fish and shellfish, though the bed of fettuccine suffers from clumps of stiff noodles here and there.

Bigger problems arise with the olio e aglio ($17/ $27). There isn’t much to this one — garlic and olive oil with sporadic julienned zucchini and squash — and that’s just fine. This type of simplicity can be the most satisfying. Alas, the spaghetti never makes it past the woody state, and the plate lacks enough garlic and is missing a better quality olive oil.

The spaghetti and meatballs are less disappointing, but fall flat. I order the dish as a side ($9) instead of an entrée, and I’m glad. The sauce is already bound with the starch of the noodles, and the effect is dryer than I’d like. A fresh ladle of sauce would help a lot. The meatballs are normal-size, and while blended expertly, could use an herb medley to elevate them.

Hopefully, gluten-sensitive readers are still with me because Bella’s has some of the best gluten-free noodles I’ve tried. Ever. I sub them in with the chicken marsala ($19/$29) fully intending to take one bite of gummy pasta and stick to the protein. To my surprise, I end up picking around a chicken breast completely sapped of any moisture to enjoy the penne that’s as close to pasta texture and flavor that gluten-free will ever get.

If you go for baked anything, go for the pasta al forno ($22/$39). This is real lasagna in which noodles are layered with a béchamel sauce rather than cheese. “No ricotta, no spinach,” my server says proudly. The white sauce holds together, noodles are expertly boiled, the sauce stays saucy and the melted mozzarella on top pulls for miles.

For the divisive menu item, we have porchetta. The menu promises fennel, rosemary and sage, but this stuffed loin lacks anything other than pork. The one nuance I note is the crunchy quilt of skin on top that’s impossible to slice through. After a failed sawing attempt, I drag off tender chunks of meat with my fork. I don’t like difficulty in getting food on my fork, though my dining companion loves the complexity of texture.

Speaking of meat, if you go for lunch, try the three-meat sandwich ($11) from the panini menu. Soppressata, prosciutto and cappicola are pressed between two massive slices of Italian bread with melted mozzarella. There are roasted peppers that I let fall to the plate without a second thought. Didn’t need them.

Appetizers are OK. The fried calamari ($18/$32) is crispy, but could use a lot less seasoning. The mussels ($19/$29) are plump and mostly juicy, though the Sambuca butter sauce is too sweet and boozy. However, I love the Gorgonzola salad ($9/$17). Hearty, grilled romaine hearts are halved down the middle and dressed in a gorgeous homemade dressing. Diced tomato, pancetta and scallions, and a zigzag of balsamic lend sweet, salt and tang. I order it twice — and I’d eat it again and again.

I can only consider dessert during my first visit, and I order the tiramisu ($9), which is a pristine teetotaler compared with the soaked-to-the-bone drunken version I’m used to. Maybe just a longer dip of the ladyfingers … it’s not the perfect ending, but it will do. S