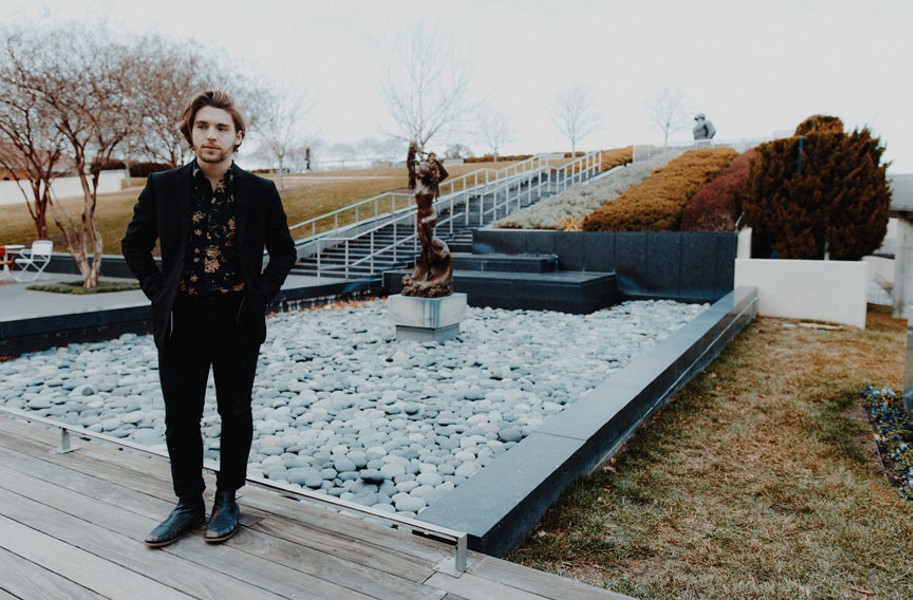 Local musician Andrew Carter’s solo project, Minor Poet, has been earning some early kudos from outlets such as Magnet and American Songwriter.

Infinite possibility, zero guarantees. That’s how Andrew Carter, the artist known as Minor Poet, feels about a future in music.

“I’m not a very talented musician,” he says with a laugh. Anyone who has given his recent Egghunt Records debut, “And How,” a listen will vehemently disagree with that self-assessment. He even got praise from American Songwriter and Magnet magazines before the record debuted. Carter remains humble, but when Style caught up with him, he admits it is all starting to hit him and a subtle grin suggests he’s pretty stoked.

Carter was born in upstate New York and spent a few years there before moving to Richmond when he was 10. As a teen, he briefly lived in Kenya with his grandparents before venturing off to the College of William and Mary to study literature. When he returned here, he dabbled in the local folk scene. “All that college stuff bled into my lyrical approach,” he says. “It was a weak point of what I did.”

Carter explains that it wasn’t until recently that he found his own style. He stepped away from solo work for a while and most recently played with the Mad Extras, an amped-up, indie-pop outfit. It was while that band was making an album that Carter started tinkering around with scrappy recording equipment at home after the sessions to blow off steam. Those recordings would become “And How,” a glorious, one-man happy accident.

Despite all the sounds you hear on the record, Carter did it all. “Not even someone pushing the record button,” he says. “I’ve been playing around with recording equipment since I was 15. That’s 10 years of bedroom records, all very bad.” He explains that creating songs just for fun with no audience intended, not even friends, was liberating. It’s also why all the fuss over his debut is a little disorienting. “Why now? Part of me asks that. What’s different?”

What’s different is that Carter found his groove by being an honest-to-goodness artist, creating something beautiful with no expectations. The record, finished about a year ago, is bursting with melodic guitar pop, chill vibes and smart, but accessible, songs. No erudite bullshit to be found. Instead, you’ll find musings about everything from the James River to sudoku; Carter’s admitted guilty pleasure. “Trying too hard can backfire. There’s a story about Hemingway scoffing at the academic analysis of his work. I think often you can tell when people put stuff in there to make you think a certain way,” he says. “Music made for itself will always be the music people enjoy most.”

There’s an unfussiness about both Carter and his songs that’s charming. According to the songwriter, production and tweaking were minimal, just “a bit of sprucing up.”

“The imperfection might be what makes it what it is,” Carter explains. “That loose feeling came into the music and gives that sense of spontaneity and off-the-cuffness. So many records get worked to the point where the fun has been hammered out of them.” However, when he met with his management team of Brandon Crowe and the Head and the Heart’s Tyler Williams, he was a little uneasy about the release. “It’s a record I made in my basement,” he says, laughing. “Sure we should be talking to labels?” The answer was yes.

Minor Poet landed with Richmond-based Egghunt Records, the folks who’ve brought us the critically acclaimed sounds of Lucy Dacus and Avers among others.

“Richmond music has always been great, but having successful labels, studios, management and that kind of thing is helping us get some visibility like we’ve never had,” Carter says. “You can have a concentration of great music, but it isn’t until the industry infrastructure is in place that it makes people pay attention.”

Carter and his band plan to tour through the fall in support of the record, including an upcoming Richmond show at Gallery 5. “The path forward is gradual, hopefully,” he says. “Much of the time I was recording, I thought about the thousands of books and poems out there, and the tiny fraction of them that get read or heard — the people that just do this maybe their whole lives and make hundreds of records that no one hears. The minor poets. I figured that would probably be me.”